MURMANSK – Member of the press, NGO representatives and members of the Public Council of Russia’s state nuclear corporation Rosatom made a heartening inspection of nuclear remediation work being carried out at Sayda Bay – including nuclear submarine decommissioning and the construction of a nuclear waste handling facility – as part of a program to liquidate the legacy of the Cold War in northern Russia. 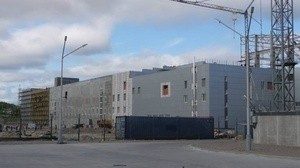 The Sayda Bay Northwest center for nuclear waste handling under SevRAO, Rosatom’s nuclear waste division is a former fishing village that was annexed as a military area in 1990. Its former inhabitants were moved out and the area is now used for storing hulls and reactor compartments from nuclear submarines.

The Sayda Bay facility is located on a small peninsula between Lesnaya and Yepachinsk Bays some six kilometers north of Snezogorsk and 2.5k kilometers southwest of Gazhiyhevo on the Kola Peninsula.

Fifty-four reactor chambers from decommission nuclear submarines are stored and serviced on the land-based portions of Sayda Bay. Another 32 three-compartment reactor blocks (including their reactor chambers) bob at piers awaiting land-based handling. Sayda Bay provides transport and technical operations for moving and installing reactor compartment from the PD-54 floating dock to on-land storage.

The facility represents a category 2 radiation hazard, and is divided into various technical and buffer safety zones. Preparations for the nuclear waste handling facility began in 2005 on financing from Germany, which has already invested €700 million in the project.

According to members of Rosatom’s Public Chamber delegation that visited Sayda Bay on June 26, they were able to view all that was accessible, were allowed to peek into every building, to visit the storage area for reactor chamber storage, and examine the laboratory and its system of radiation monitoring.

“Everyone noted the cleanliness and order in which the territory, buildings and interior areas of the enterprise are kept,” said Bellona Murmansk Director Andrei Zolotkov, who was among those who visited the site. “Even the laboratory’s’ glassware was buffed to a polish, and there wasn’t even dirt to be found on the roadways, even cigarette butts were nowhere to be found – they run a tight ship.”

The Sayda Bay territory will also include safety blocks, formed as a result of nuclear submarine and nuclear service vessel decommissioning. Russia also has surface ships with nuclear power installations, which are also assumed to be situated at Sayda Bay for long periods of time where they will be safely stored by maximally reducing the levels of radiation to allow personnel to work with these bulky radioactive metal constructions.

In the opinion of Alexander Nikitin, Chairman of the Environment and Rights Center (ERC) Bellona in St. Petersburg, as soon as Sayda Bay’s facility for conditioning and processing nuclear waste begins functioning, all radioactive waste from the Murmansk-based Atomflot for Russia’s nuclear icebreaker fleet will also be resituated to Sayda Bay. Nikitin said that the amount of money invested in the Sayda Bay would reasonably justified if this turns out to be the case.

“Honestly, that there is no convincing answer so far to the question of where to get 100,000 cubic meters of radioactive waste for Sayda Bay,” said Nikitin.

“Taking into consideration the amount of solid radioactive waste in Russia’s Northwest Region and the cost of its processing at Sayda Bay, it can’t be ruled out that in the future a decision will be taken to resituate solid radioactive waste from other regions in Russia at Sayda Bay to justify the expenditures that went toward construction the facility,” said Nikitin, saying that this issue was complicated and ambiguous.

View all photos from the Visit of the Public Chamber of Rosatom to Sayda Bay on June 26.