The Severodvinsk, the flagship for the new Yasen class of large scale Russian submarines, has failed sea trials in the White Sea, revealing reactor power problems, noisy operation, untested missile equipment, faulty components and huge cost overruns that will cause further problems and setbacks for the vessel’s scheduled serial production. 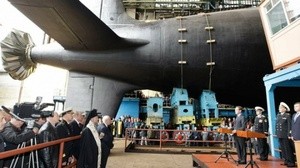 A military source told Russian papers that the navy was laying most of its chips on the table with the Yasen design, saying its status as a multipurpose nuclear sub means it will be a first alert “against missile cruisers from western countries.”

But an anonymous Ministry of Defense source cited by the Russian newsire interfax said the Severodvinsk is hardly up to that task after the results of its sea trials were known.

“The Severodvinsk tests revealed that its nuclear power unit did not reach the rated capacity, and the submarine produced too much noise,” the defense Ministry source told Interfax.

“It is impossible to commission the submarine with such serious shortcomings,” he said.

Designed during Soviet times, the Severodvinsk is outfitted with 24 supersonic Onyx anti-ship missiles that can destroy an aircraft carrier in one blow, and 10 torpedo tubes for launching self-guided torpedoes – topping its closest American competitor by six. The sub is also expected to have an undersea speed of 30 knots and a maximum submersion depth of 600 meters. It is designed to sustain autonomous voyages of up to 100 days and will be crewed by 90, 32 of whom will be offiers, said Interfax.

All of this begs the question: What kind of conflict is Russia anticipating?

One hint might lie in President Vladimir Putin’s visit to Russia’s northern shipyards in July, where he stumped for increased Arctic sub patrols to protect Russia’s continental shelf oil and gas recovery projects ­– a kind of paranoid overkill to protect the resources on which the Russian economy is built.

But military analysts and observers are saying this kind of firepower will place an extreme weight on Russia’s limited military coffers.

“President Putin loves toys with price tags surpassing the size of Russia’s wallet. But this is the problem of Russian taxpayers who should draw certain conclusions when they cast their votes,” said Igor Kudrik, a Bellona expert on nuclear submarines and the Russian Navy. “Our concern is planned militarization of the Arctic which not only is not going to make it safer, but pose additional dangers with respect to the environment as well.”

Constructed by the Sevmash shipyard near Arkangelsk, the Severodvinsk– designated by the identification number K-329, and the first of the project 885 Yasen Class – was to have been passed to the Russian Navy by Sevmash in 1998, after first construction began on it in1993. Several missed deadlines later, the boat was to be launched in 2010. That was then delayed until 2011.

Now, according to reports in business daily Kommersant and official mouthpiece Izvestia, the latest sea trial indicates the sub likely will not be ready until summer of 2013.

One of the problems, according to an anonymous source cited by Interfax, is that the reactor not only doesn’t deliver enough power for the vessel, but that the vessel’s operation is also noisy – something undesirable in the stealth mode in which submarines are to operate.

Defense Ministry sources refused to comment on either issue, so details on the reactor’s integrity are sketchy.

The enormous submarine represents something of a return to big Cold War thinking: With a water displacement of 13.8 tons, it is twice as large as the US Navy’s Virginia Class attack submarines. But the US has backed off mega-submarine projects comparable to the Yasen since the end of the Cold War out of simple economic considerations. Russia, notes Izvestia, is pressing on – delays and drying wallets be damned.

Another unnamed military source that spoke with Izvestia blamed spiking costs in metal, electricity to power the Sevmash shipyard, and rising salaries for qualified welders and metal workers for the Severodvinsk’s cost overruns.

The source said the Severodvinsk has so far cost the Ministry of Defense some 50 billion roubles ($1.5 billion) – the equivalent cost of two Borei class nuclear subs, the first of which was launched in 2008, or 50 SU-35 fighter planes.

The second Yasen class sub after the Severodvinsk, the Kazan, is projected to be over twice as expensive, weighing in at 110 billion roubles, the source told Izvestia. The military had been counting on paying something more on the order of 70-80 billion roubles per sub, eight of which are planned to be built by 2020.

The Yasen class is therefore projected to cost 700-800 billion roubles, or five percent of Russia’s defense budget over the next 10 years, Izvestia said.

But does this cost justify protecting the untapped Arctic oil and gas reserves on which Putin so relies for Russia’s economic growth?

That Sevmash was having problems getting the Severodvinsk to perform to standard after so many delays was greeted in Russian headlines as a failure.

But Igor Korotchenko, head of the Defense Ministry’s public council, told Kommersant that failure was too harsh a characterization.

“[…] we are for the first time beginning to build and test vessels of this generation – and correspondingly this is a new product, advanced, and therefore certain deficiencies and problems are revealed at the stage of testing for delivery, which will then be eliminated by industrial production,” he said.

Korotchenko refused to comment on the Interfax reports of reactor power problems and noisy operation of the Severodvinsk because the information had come from an anonymous source, he told the paper.

“If this had been done in an official announcement from, let’s say, a representative of the military industrial complex, or the Sevmash factory, or anybody from the Defense Ministry, we could at least say the information was trustworthy,” he said. “For now, I can only say that the Severodvinsk is a low-noise submarine.”

He repeated that he was sure any kinks would be worked out at the level of industrial production.

“The sub contains many innovations,” he said. “We’ve never had a sub like this.”

Ironically, noted Kudrik, the so-called innovations that are holding up the Severodvinsk’s completion are based on blueprints that are over 20 years old.

“Soviet and Russian submarines have always being noisy due to the poor quality of building materials,” said Kudrik. “The reactor plant installed on this submarine is of newer design and it seems to be suffering from not being properly tested. Russian industry has been in shambles ever since the collapse of the Soviet Union and recovery is protracted and painful,” he said, adding, “This new submarine is an example of how bad things are.”

Other analysts suggested that scaling back on the Yasen Class’s military hardware could lessen the strain on the Russian military budget.

“The high cost of the Yasen is justified by the highest military capabilities of the vessel,” Captain 1st Rank Konstantin Sivkov, and vice-president of the Academy of Geopolitical Problems, told Izvestia. “If they can bring the price down, it will cost not much more than the Virginia Class sub, but will nonetheless be more powerful than the American vessel.”

But Kudrik says that bringing the price down remains a pipe dream in today’s Russia. The problems with corruption and the wasteful handling of resources are endemic in Russia’s current regime – and those problems will never escape this single submarine project.

Meanwhile, in another PR stunt meant to showcase Russia’s military prowess, the Washington Free Beacon reported Tuesday that a Russian Akula Class submarine had been buzzing the coast of the US’s Gulf of Mexico undetected by the US Navy for weeks.

Its presence was only known after a news leak to western media. The last time a Russian sub is known to have penetrated US waters was in 2009, the paper said.

The submarine patrol comes at a time when US President Barack Obama is planning defense cuts of up to $487 billion over the next 10 years. Russian analysts speculated that the news leak was a means of applying pressure on the Obama administration to maintain defense spending – a time honored Cold War tactic of mutually assured bankruptcy.

The Defense Ministry’s Korotchenko confirmed that this was indeed the intention, stressing to the paper that the notion of a Russian military threat was being used to persuade US officials that budget cuts to the defense industry would harm the United States’ national security.

Whether the US will take the bait remains unknown, but naval analyst Norman Polmar told the Washington-based paper that the incursion – and news leak about it – where meant to raise hackles.

“Sending a nuclear-propelled submarine into the Gulf of Mexico-Caribbean region is another manifestation of President Putin demonstrating that Russia is still a player on the world’s political-military stage,” naval analyst Norman Polmar told the Washington-based newspaper.

“The Russian Navy provides him with a means of ‘showing the flag’ that is not possible with Russian air and ground forces,” Polmar said.

Korotchenko glowed with evident pride in his comments to Vzglyad newspaper about the Akula’s incursion.

“This tells us that Russia still has potential and that the country is capable of missions that cover our fleet in prestige and respect,” he said.