The Bellona Foundation supports the development of environmentally clean transport and extends an invitation to Russian organisations to cooperate with Bellona to develop emissions-free hydrogen-based technologies to forward this goal. 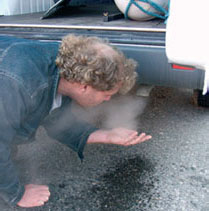 Key organisatons include Russian scientific institutions who have the know-how to retool for developing alternative energy sources. At present, Bellona is already co-operating with the Kola Scientific Centre of the Russian Academy of Sciences in the development of wind power on the Kola Peninsula in Northwest Russia.


In an era of growing oil prices, Bellona considers hydrogen power for the transport sector to be the most viable and environmentally friendly alternative. Beyond that, hydrogen power is also energy effective and noiseless.


Bellona has been engaged in alternative fuel research since 1989. The organization produced a report on clean energy in 1999, and on hydrogen specifically in 2000. After considering many alternatives, Bellona decided that hydrogen fuel was the best alternative.

Bellonas choice of hydrogen as the alternative transport energy source behind which it would throw the bulk of its research weight was a carefully considered one. The decision was made after considering the possibilities presented by electric cars. In 1989, Bellona bought a Swiss made electric car and imported it to Norway. It took more than three years to clear all the bureaucratic hurdles and to secure all necessary permits to operate the car on Norwegian roads. It was found that electric cars could only travel 100 kilometers without recharging, and that recharging the vehicles took eight hours.


Ecologists insisted that electric vehicle operators deserved tax benefits. The driver of every vehicle coming in and out of Oslo must pay a fee. Bellona shoved this rule aside and demanded a change in societys attitude toward vehicles operating on alternative fuels. Bellonas electric car was impounded several times for ignoring the tolls. It was returned, however, on each occasion.


But Bellonas persistence paid off. After a number of years, the government adopted legislation that stipulated alternative fuel cars did not have to pay to enter or leave the city. Additionally, they were allowed to use special lanes that were previously designated only for bus and taxi traffic. As such, owners of such cars are able to save some five hours of commute time a week and avoid traffic jams.


This car, of course, is not suited for travel, but is fully suitable for trips around town, said Bellona president Frederic Hauge. Currently, 600 Norwegians are on waiting lists to get such cars.

In 2003, a project called Clean Urban Transport for Europe (CUTE) began operations, its goal being the developments of fuel cell vehicles and an infrastructure to support them. The majority of leading European countries are involved, such as England; Sweden; Germany; the Netherlands; Spain and others. Participants in the CUTE research and development project are obliged to substitute a part of their current public transport infrastructure with fuel cell vehicles.

The authors and operators of the project say that those who live in large European cities gain more experience with environmentally clean vehicles, they will more fully embrace them. Hydrogen busses are being researched, checked and fine tuned in Germany. Daimler-Chrysler has build 30 busses and 10 filling stations toward this goal.


Norway decided not to take part in the CUTE project as there were not enough interested businesses in the country who wished to work on the undertaking.


The first hydrogen vehicle in Norway

As a result of Norways decision to not partake in the CUTE project, Bellona had to develop the projects by its own means. The organisation had to leap many hurdles, the main one being securing a hydrogen vehicle. The chief difficulty was that auto makers had only begun producing hydrogen vehicles recently, and they were mainly for internal research—sometimes secret research.


Despite this, Bellona became the first Scandinavian organisation to secure a hydrogen vehicle, importing two from Germany in 2002 that were manufactured under a joint-German-American project. 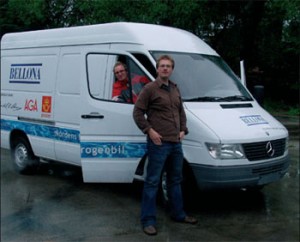 It turned out that we could not use these vehicles on Norwegian roads. They didnt correspond to safety standards and required frequent repairs, said Isak Oksvold, Bellonas engineer for the hydrogen vehicles.


Bellona managed to repair one of the cars and in 2004 we received a safety certificate to use the car. In total, the project cost Bellona NOK 3 million ($460,000).


Bellona still owns this hydrogen van, but it is used by Norways road-building giant Mesta, in conjunction with a joint ecological project between Mesta and Bellona. The company uses the hydrogen car for routine road inspections, but also monitors its work. After operating the Bellona hydrogen vehicle for a year, Mesta ordered several more, but, the same red tape that held up the inaugural vehicles is currently holding delivery of the news ones as well.


The goal of the joint ecologial programme between Bellona and Mesta is to reduce Norways carbon dioxide emissions by 50 percent by the year 2012—which is even more ambitious than Norways Kyoto commitments.

The interest in developing hydrogen powered vehicles can be explained by three main reasons. First, governments want to liberate themselves from ever-growing hydro-carbon based fuel prices.


Second, the development of fuel cells with the aim of reducing CO2 emissions is stipulated in the Kyoto Protocol, to which the majority of European countries are signatories.


General Motors, Honda and Toyota are the main car makers that have more modern technologies and an interest in fuel cell vehicle development. At the moment, however, hydrogen cars are extremely expensive as they are not yet in serial production. They are also not in high customer demand as no infrastructure yet exists for them.


According to Bellona’s Oksvold, a few steps must be taken to hasten the tempo of developing fuel cell cars. First, governments should set targets for car producers and energy companies.


It can be a law or a regulation, said Oksvold. I am sure that fuel cell technologies will develop more rapidly if car producers are obliged to make a particular number of fuel cell vehicles a year.