Tokyo officials are reticent about details and programme future, but all involved hope for a swift and beginning to the programme, whose success will dictate further Japanese funding commitments — including the decommissioning of several more submarines. 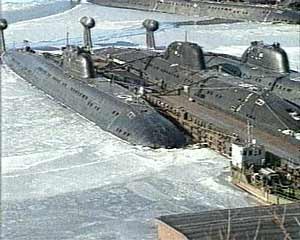 After a series of postponements and often tense government negotiations, Japan and Russia will early this summer jointly dismantle a Victor-III class attack submarine as part of a pilot project to gauge costs and determine the magnitude of further investment from Tokyo for decommissioning Russia’s floating stocks of retired Pacific Fleet non-strategic submarines.

At stake is nearly $200 million in Japanese funding, which Tokyo put forth in 1993 to help Russia deal with its radioactive legacy in the Far East, a legacy that includes some 41 rusting and foundering non-strategic nuclear submarines — spread from Kamchatka to Vladivostok. Many of these subs were slated for destruction with Japanese funding in 1999, but Russia’s concerns with secrecy eroded Moscow’s commitment to the project.

Some of these subs are barely afloat, and are not currently covered for destruction by the US Pentagon’s Cooperative Threat Reduction, or CTR, programme, which has demolished more than 6,000 warheads and missiles and 29 ballistic missile submarines that targeted the US since its inception in 1992.

Japan renewed that financial commitment in June, 2001, during the Group of Eight, or G-8 conference, during which G-8 members and other states pledged some $20bn over 10 years to help Russia and its break-away states deal with their devastating nuclear inheritance. In this sense, G-8 nations, such as Japan, Canada, the United States, the United Kingdom, France, Germany and other non-G-8 states like Norway and Sweden have pledged to foot the enormous threat reduction bill for non-strategic weapons and submarines that CTR — due to current US legislative restrictions — cannot cover on its own.

Part of the advantage of the G-8 agreement is that non-ballistic submarines were never on the Pentagon agenda because they posed no direct nuclear threat to the United States. The pile-up of mutli-purpose subs, like the Victor-III class, however, has recently begun to constitute even more of an environmental threat, according to Russia’s Atomic Energy Ministry, than the ballistic subs ever did.

The latitude for expanding dismantlement efforts bestowed by the June G-8 conference has therefore drawn a host of interested nations — mainly Japan and non G-8 member Norway, who have taken this problem seriously for decades.

Japan offers help, but Russia often reluctant to take it
Japan has repeatedly expressed its desire to help Russia deal with its nuclear legacy, and in 1993, it established the joint Russian-Japanese mouthful Committee on Cooperation to Assist the Destruction of Nuclear Weapons Reduced in the Russian Federation.

The joint committee put up some $200m to help with Russian nuclear clean up. One of the most cogent of these projects has been the contraction of the Landysh, an enormous $36m liquid radioactive waste treatment barge anchored at the Zvezda decommissioning point near Vladivostok that, since its commissioning in 2001, has processed 800 tonnes of irradiated liquid waste from submarines, according to experts at the Centre for Non-proliferation Studies in Monterey California, or CNS.

The Landysh’s capacity to process 7,000 cubic meters of low-level liquid radioactive waste a year, according to the Washington-based Nuclear Threat Initiative, or NTI, is enough to purify the annual production of liquid waste generated by Russia’s entire Pacific Fleet.

But the Japan-Russia Committee has experienced its share of turbulence.

Japanese funding temporary suspended
The funding programme — which was suspended last spring and renewed in January — has been dogged by bureaucratic confusion in Moscow. But since the June announcement by the G-8 to contribute $20bn over the next ten years to Russia’s disarmament efforts have redoubled. The results of the January Summit between Japanese Prime Minister Junichiro Koizumi and Russian President Vladimir Putin have seen the Kremlin commit more energy to stimulating and streamlining its non-proliferation efforts.

Putin even appointed his Prime Minister Mikhail Kasyanov as Russia’s non-proliferation czar — cabinet level post that does not even exist in the Untied States, meaning few CTR officials have direct access to President George Bush. Because of this and other efforts by the two countries such as the establishment of the ‘Task Force’ to effectively implement the cooperation, Japan, according to various Tokyo officials, has put the $168m that remains in its Japan-Russia committee fund back on the table.

Aside from submarine dismantlement, part of this money may be invested in rehabilitating a branch segment of Russia’s impoverished Far East railroads, which are responsible for shipping of spent nuclear fuel to the Ural mountains. Japanese government sources, however, would not confirm this possibility in interviews this week, and another Japanese government source said that $168m funds had not yet been allocated — even for the dismantlement of remaining retired multi-purpose nuclear submarines, which depends on the success of the Victor-III pilot project.

The cost of dismantlement
The cost of the Victor-III project is estimated by Bellona and other expert groups to be around $5m dollars. A Japanese government source would not confirm this figure saying instead that the purpose of conducting the project — which will take place at Zvezda shipyard — is to determine more precisely what these costs would be.

The Japanese government does have its own internal budget projections for the project, he said, but he declined to disclose the amount. "We can’t disclose this because [the prices are] not fixed yet," he said.

The source was also vague about the timeframe in which the pilot project would be completed, giving an estimate of anywhere from six moths to two years. 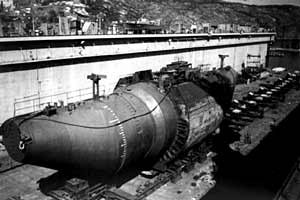 Still a long road ahead
The Japanese government source, said that there are "no difficulties with the project, and Japan and Russia are working together quite well and we would like to start the work by this summer," he said. "That is the understanding."

That understanding was confirmed by members of the Russia Atomic Energy Ministry, or Minatom’s staff, though many in this cadre would like to see more money from the Japanese and less concern about regulatory control.

But some observers have characterized the relationship between Moscow and Tokyo over the submarine dismantlement pilot project as rocky — if not a bit secretive. Robert Karniol, Asia Editor for Jane’s Defence Weekly — a long-time observer of Russia-Japan nuclear negotiations for one of the world’s most respected periodicals of defence information — said that "the implementation of the pilot programme remains unclear."

"The reason it remains unclear, and that there have been disputes" said Karniol, "is that the Japanese want more oversight — they have to answer to their tax-payers." Indeed, various interviews with Japanese officials over the past few months have revealed that regulatory procedures are a true sticking point. "Just what those sticking points are, however, may never be known," said Karniol.

Said Karniol: "They are dealing in sensitive areas with sensitive technologies — a certain silence would be expected."

It is hoped that the Kasyanov appointment, and his non-proliferation oversight body, will defray some of these difficulties — it was, in fact, the creation of this Kremlin level position that led Tokyo to re-release its funding, Japan’s Asahi Shimbun newspaper reported in January. If the Japan-Russia committee fails to meet its goals in five years, it will be disbanded, Japanese media has reported.

Victor-III class specifications and dismantlement methods
Victor-III class submarines, or project 671 RTM, started to enter service in 1977. Of the 26 in service throughout the Russian Navy, 10 were commissioned to the Pacific Fleet. Of that 10, however, only two — the K-264 and the K-355 — allegedly remain in service. The remaining eight were retired in the mid 1990s, but all still have their spent nuclear fuel on board. Each Victor III class submarine has two 72 megawatt pressurized water reactors and eight compartments encased in low magnetic steel.

The precise submarine that Japan and Russia will be using for their pilot project is the K-412 — later designated as the B-412.

The K 412 — like its other Victor III class twins — is capable of carrying SS-N-21, SS-N-15 and SS-N-16 nuclear tipped torpedo missiles. In 1991, General Secretary Mikhail Gorbachev ordered that all nuclear warheads from non-strategic nuclear weapons be removed from submarines.

By the middle of the 1990s, however, the 671 RTM project was flagging and fewer and fewer were built. In 1995, after a total of six missions, the K 412 was retired to a Far Eastern submarine base.

The K 412’s hull was laid down in 1978 at the Far East base of Komsomolsk-na-Amur, near Khabarovsk. It entered operational service in 1979, on December 30th — the day before New Year’s, in keeping with the Soviet Navy’s tradition of putting to sea the day before major holidays.

Victor-III class submarine decommissioning — as it would be for any nuclear submarine — is a four-step process. First, weapons and other important equipment are removed in dry-dock and the vessels are laid up with a reduced crew; second, spent nuclear fuel is removed from the reactor; third, the submarines are decommissioned by cutting out the reactor compartment with enormous shears and saws; lastly, the reactor compartment is sealed and transported to a suitable location — ideally in to a place where radiation safety can be maintained and verified.

In the case of the Pacific Fleet the reactor compartments remain afloat attached to pontoons in Chazma Bay and the Bolshoi Kamen port. Although the reactors are supposed to be empty of spent fuel at decommissioning, some reactors that have been damaged still carry their toxic fuel.

Because of this, finding suitable storage for such reactors compartments should be one of the priorities of the bilateral Japanese-Russian — or other — international agreements.