NEW YORK/ST PETERSBURG – Russian emergency officials have come up with a novel tool to smother the spate of heat wave caused wildfires that threaten to tear through radioactively contaminated forests and lands during the country’s hottest summer, releasing radiation: pull information about fires in radioactively contaminated areas and threaten punishment for those spreading “rumours.” 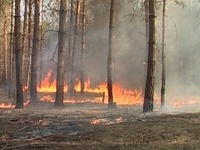 On Friday, Sergei Shoigu, head of Russia’s Ministry of Emergency Services (MChS in its Russian abbreviation) issued a strong demand to “deal with” those groups of environmentalists and media who had reported on the “rumours of radiation dangers from the fires in the Bryansk Region,” a Russia-Ukraine border region that was hit heavily by fallout from the 1986 Chernobyl explosion, the world’s worst nuclear power plant disaster.

Shoigu also demanded that those who reported on the spread of radiation fro fires burning in contaminated areas be made known to authorities.

As a consequence, public information about fires in areas posing a potential radiation hazard were ripped down from government websites, most significantly the site of Roslesozashchita, Russia’s forestry agency, which pin-pointed areas most at threat from radiation redistribution into the atmosphere of fires that have been burning across Russia since July.

Whether the information was taken off the website by Roslesozashchita unilaterally or whether it had been ordered to do so by the MChS or the Kremlin could not be established Monday. A spokesman for the forestry agency referred Bellona Web to the MChS for comment, where another spokesman, who refused to give his name, repeated Shoigu’s denial that any radiation dangers were posed by the fires and commented no further before he hung up the phone.

The forest fires, however, continue to threaten a large number of Russia’s nuclear facilities and contaminated lands, according to information obtained by Bellona Web, including the All-Russian Research Institute of Experimental Physics, a nuclear research facility in Sarov, Nizhny Novgorod Region. Fires still smouldering near Novovorozh Nuclear Power Plant in the Voronezh Region, 42 kilometers south of Moscow, have headed further southwest into ‘the neighbouring Belgorod Region. The Belgorod region borders on Ukraine’s west, an area of special concern given its proximity to Chernobyl.

Fires in the Chelyabinsk region continue to rage, threatening evaporation of lakes and rivers and the spread of radioactive silt.

The disappearance of the information bears the earmarkings of so many other Russian nuclear mishap cover-ups from the Kremlin’s stony silence following Chernobyl, to radiation dangers surrounding the Russian Northern Fleet to Russia’s attempted media black out surroundig the sinking of the Kursk nuclear submarine in 2000 – among dozens of others.

“Neither MChS nor Roslesozashchita have the right to hide information about the environment from Russians, a right that is guaranteed by the Russian Constitution,” said Vladimir Sliyvak, co-chair of Russia’s Ecodefence in a statement to Bellona Web.

“It is evident that fires have taken place on (radioactively) contaminated areas and that there is a possibility of re-distribution radiation – its stupid to deny it,” he said.

MChS could blame self for spreading ‘rumours’

Environmentalists, reporters and government officials, including the MChS, had previously warned that the spread into the Bryansk of Russia’s wildfires during this summer, which his the hottest since records started to be taken 130 years ago, could cause a new release of radioactivity into the atmosphere.

On August 5, 10 days ago, Shoigu himself warned of possible radiation spread should fires enter the contaminated zone surrounding Chernobyl.

“In the event of a fire there, radionuclides could rise [into the air] together with combustion particles, resulting in a new pollution zone,” he told Russian national television.

Bellona’s executive Director Nils Boehmer and  Sliyvak,  said – in echo of Shoigu’s warnings –that fires could lift irradiated material left over from the Chernobyl explosion into the air, perhaps bringing it as far Russia’s already smog choked capital of Moscow.

“When fires spread to contaminated zones, they lift radioactivity up into atmosphere and the wind distributes it,” Slivyak told Bellona Web last week.

He was also critical of government agencies playing down the dangers of the fires.

“It reminds me 1986 when Chernobyl accident happened – at first officials also insisted there was no radiation problem,” he said. “And as a result, a lot of people suffered.”

By last week Roslesozashchita website was reporting – before it was taken down – that 269 fires were burning over 664 acres in the Bryansk Region.

But that was not all.

Roslesozashchita’s website also reported more than 500 other fires still raging through more than 4000 acres of  radioactive trouble spots: In the Kaluga, 11 fires raged over 22 acres; Twelve fires were burning over 155 acres in the Kurgan Region; Tula hosted six fires over 109 acres;  The Orlov Region held three fires over 32 acres and the Penza region, 34 fires over 206 acres.

But most worrisome of all, the Chelyabinsk region, home to the Mayak Chemical Combine, Russia’s nuclear reprocessing facility and one of the most radioactively contaminated areas on the planet hosted 401 fires over 3,536 acres.

Yet now the information is gone in a puff of smoke, but Slivyak’s Ecodefence managed to maintain a copy (in Russian) of what had been pulled from Roselesozachita’s website here.

The area surrounding Mayak poses special dangers unanticipated in Russian fire fighting efforts. Not only are irradiated trees, land and nuclear waste in danger, but rivers and lakes into which the Mayak Chemical Combine has for decades been dumping radioactive waste – principally the Techa River Cascade and Lake Karachai – have been evaporating, exposing irradiated silt to the air and wind.

Enviornmental groups in that area, most notably the local Movement for Nuclear Safety has sent an appeal for help to Chelyabinsk Regional Governnor Mikhail Yurevich, asking that he tend to the issues of silt that could arise in the event of winds, which could cause a radiation hazard equal to that of one that happened in the region in 1967.

During that year, exposed banks of the irradiated Lake Karachai, wrote the group in their appeal to Yurevich, were hit by strong whirlwinds and spread radioactive silt throughout the Chelyabinsk Region, necessitating the evacuation of several thousand people from the region and neighbouring areas.

Slivyak in his statement to Bellona demanded that Roslesozashchita return the information for public consumption.

“If it is true that mobile laboratories are working in the radioactively contaminated areas, then the data must be accessible to any taxpayer, as they are paying out of their pockets for the work of MChS and other expert organisations,” he said.