In what are the most specific data yet available, Rosatom Chief Alexander Rumyantsev essentially declassified nearly exact amounts of decommissioned weapons-grade nuclear materials outside nuclear weapons to be housed at the Mayak Fissile Materials Storage Facility (FMSF) in a letter to Russian nuclear analyst Lev Maximov, a copy of which was obtained by Bellona Web.

Published on December 2, 2004 by Charles Digges 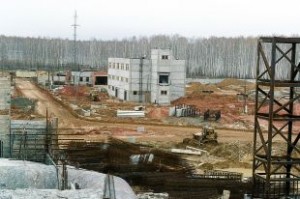 The amount of fissile material slated for storage had remained a tightly guarded secret as the figures reveal Russias strategic nuclear capability, as well as the fact that they had, by the end of the Cold War, achieved near nuclear parity with the United States.


Rumyantsevs letter to Maximov, dated November 19th 2004, was a response to an open letter to Russian President Vladimir Putin regarding security concerns surrounding the FMSF, which is being built by the US Pentagon-Run Cooperative Threat Reduction (CTR) programme. In it, Rumyantsev disclosed that Russia produced between 599 and 626 tonnes of weapons grade plutonium and uranium currently outside of nuclear wepaons produced during the arms race. The total figure for weapons-grade uranium produced by the Soviet Union is estiamated on average by various western experts to be around 1050 to 1200 tonnees.

–>
Letting the cat out of the bag

According to Maximov, the facility presents a dire national threat to Russia, both in terms of concentrating so much weapons-usable material in one place, making it vulnerable to terrorist attacks, and because the FMSF—CTRs longest running project to date—gives the Pentagon an inside view at, and the ability to cripple, Russias nuclear defence capabilities


But Rumyantsevs response let the cat out of the bag: Of that, 599 and 626 tonnes of weapons-grade nuclear material, 533 tonnes is highly enriched uranium (HEU) and between 66.6 tonnes and 93.3 tonnes of it is plutonium, Rumyantsev wrote.


In the letter, Rumyantsev specifies that the FSMF, initially conceived in 1992 as a two part structure, is envisioned to house 50,000 containers holding more than 600 tonnes of fissile material—more than 100 tonnes over the early 90s 500-tonne estimates—extracted from decommissioned warheads.


In particular, Rumyantsev wrote that the construction of the FMSF—one of the US Defence Department Cooperative Threat Reduction (CTR) programmes longest running projects—would take place in two stages. The volume of the two-stage storage facility is 50,000 containers of fissile material, Rumyantsev wrote.


Much of this material, he indicated in his November letter, would be stored in metallic form, whereas the additional 1.2 tonnes of weapons-grade plutonium still being produced annually by Russias three remaining plutonium production reactors in Seversk and Zheleznogorsk, would be stored in oxide, or power, form. Some 9 more tonnes of weapons-grade plutonium will be produced before these reactors are shut down within the next decade. The United States Department of Energy is currently financing the closure of those reactors.

Rumyantsevs comments make surprising revelations and raise several questions. First, the current FMSF—which was officially opened with a ribbon-cutting in December 2003, but still has at least a year of additional construction before it can begin accepting nuclear material—is designed to hold only 50 tonnes of plutonium and 200 tonnes of HEU.


It was initially planned in 1992 that CTR would help finance and construct two such facilities that would conceivably hold some 500 tonnes of fissile material. But that notion of building two identical facilities—one in Seversk and the current one at the Mayak Chemical Combine in the southern Urals—was unilaterally scrapped by Rumyantsev himself in a 2003 letter to his US CTR counterparts.


Rumyantsev announced in the 2003 letter that the one wing of the FMSF at Mayak would house only 25 tonnes of plutonium in immobilizes form and no HEU, all of which would be diverted to the US-Russia HEU-LEU programme, via which Russia down-blends its excess HEU and sells the resultant low enriched uranium (LEU) to the United States for use in civilian reactors there. As a result, the current FMSF will operate only at quarter of its current facility and at an eighth of the initially-planned two wing approach.

Rumyantsevs rationale for the decision not to build a second wing to the FMSF apparently hinged on the currently stalled 2000 US-Russia Plutonium Disposition Agreement, in which Washington and Moscow agreed to destroy 34 tonnes of surplus weapons grade plutonium.

–>
The dispositioning of this plutonium is to take place in mixed plutonium and uranium oxide (MOX) fuel to be burned in specially retrofitted commercial reactors in Russia and the United States. This surplus plutonium, initially declared at 50 tonnes, was later cut back to 34. No progress has been made on the MOX programme since last spring, however, because Russia and the US Department of State are locked in a heated liability over the project that could eventually kill it.


While the infrastructure for the MOX programme was being built, the surplus plutonium was to be stored at the FMSF. But because both the United States and Russia agreed to destroy only 34 tonnes of surplus weapons-grade plutonium, Rumyantsev calculated that by slashing the 50 tonnes slated for storage at Mayak, and adding the 9 tonnes left over from the production reactors, we would meet his 34 tonne surplus plutonium obligation to the United States.


No official agreement between the United States and Russia regarding the actual form and structure of the FMSF was ever signed, so Rumyantsev was technically free to issue this edict.

Questions, therefore, still shroud Rumyantsevs responses and which could not be cleared up by Rosatom. For instance, Rumyantsev writes in his letter to Maximov as if the 1993 two-wing FMSF was still on the boards. The 599 to 626 tonnes of weapons grade material that were apparently to have been put into storage could have been accommodated for in the initial two-wing plan, the CTR and Rosatom officials concurred.


But Rumyantsev while writing makes no mention of the fact that he himself had abandoned that plan. Likewise, he makes no allusion to any Russian plans to build a second wing to the FMSF in the future. Such an option has been inconclusively discussed at high levels in the past, according to Rosatom officials.


Nikolai Shingaryov, Rostatoms chief spokesman said he was unaware of Rumyantsevs letter to Maximov and could not confirm or deny any information or figures that it contained. He said, though, that he was not acquainted with any plans to deviate from Rumyantsevs 2003 directive to store only 25 tonnes of weapons grade plutonium and divert 200 tonnes of HEU to the HEU-LEU programme.


Another source in Rosatoms fuel cycles division, who asked not to be further identified, confirmed that the 599 to 626 tonne figure was accurate.


I am not able to say to the kilogram how much material there is, but between 599 and 626 tonnes would be a very specific estimate—more specific than we have seen before he said.


An official CTR, who requested his name not be used, was surprised by Rumyantsevs apparent candor.


Naturally, the original two wing plan for the FMSF gave the US some basic estimates of [Russias] Cold War nuclear output, but I have never heard of anyone so high ranking as Rumyantsev naming such specific figures before, the official said in a telephone interview from Washington.


Granted, 599 to 626 tonnes is not pin-pointing it, but its by far the narrowest spread I have heard from them.


Many Western nuclear analysts in the past months have suggested that the current FMSF could hold significantly more material than even the initial 50 tonnes of plutonium and 200 tonnes of HEU it was slated to house.


The CTR official concurred. He said the Mayak FMSF was constructed in such a way as it could handle more material that it was initially slated to take. But the extra 305 to 376 Rumyantsev suggests wouldnt be feasible without another facility, as was initially planned.


Both the CTR and the Rosatom official said they were unaware of any unilateral Russian plans to build a second wing for the FMSF, but the Rosatom official did say that such plans had been casually discussed in the corridors of the Ministry of Atomic Energy, Rosatoms precursor.


But nothing, to my knowledge, was every put into official form, said the Rosatom official.


So where is this extra material going?

The fate of the extra 305 to 376 tonnes of surplus weapons-grade material mentioned by Rumyantsev and that will not fit into the current structure of the FMSF remains a matter of speculation.


It is doubtful that Rumyantsev and a close group of officials are planning on building a second wing to the FMSF with their own money for the simple fact that Rosatom has given every indication that it intends to pursue plutonium fueled reactors called breeders, for which this excess plutonium would be the backbone.