UPDATED: Nuclear officials talk about what isnt there

ST. PETERSBURG—A high ranking official with Russias nuclear regulatory service made a disturbing announcement during a conference on state control over securing and accounting for radioactive materials and waste earlier this month, stating bluntly that Russia has in place no such system to handle any of this. 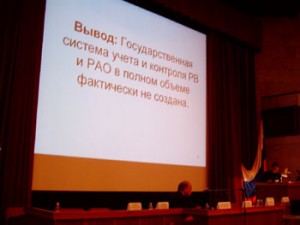 Speaking to the July 5th  8th St. Petersburg conference, entitled The System of State Accounting and Control of Radioactive Material and Waste, Sergei Lukovnikov, deputy director for the Northern European Inter-regional Department of the Federal Service for Nuclear Oversight—known in is Russian abbreviation as FSAN—frankly contradicted the name of the conference, stating that a state system of accounting for radioactive materials and radioactive waste has not factually been created in any full sense. FSAN used to be Gosatomnadzor, or GAN, but was rearranged in a government reshuffle in March enacted by President Vladimir Putin.

Lukovnikovs assertion also directly contradicted opening statements by Alexander Agapov who heads the Department of Nuclear and Radiation Safety at the Federal Atomic Energy Agency—formerly Ministry of Atomic Energy, or Minatom until the same March reshuffle. Agapov said during his introductory statements on July 5th that all radioactive material and waste in Russia were under full control.

The announcement was somewhat of a slap in the face to the former Minatom from the former GAN, who have a history of rivalry over who gets to oversee what sector of Russias vast nuclear industry. In this case, it is more likely that FSAN has more concrete knowledge about the controls and accounting systems that are—and are not—in place for radioactive waste.

In accordance with governmental decree No. 1298 from October 1997, such an accounting and control system should have been in place more than three years ago, beginning January 1, 2001.

No System
This decree endowed the executive power structures of the subjects of the Russian Federation—the official name for Russias regions, all of which are endowed with local governments—with the authority to account for and control radioactive materials and waste within their respective jurisdictions. Russia is divided into 88 subjects of the federation and fully 85 of these have radioactively dangerous installations. As per the decree, these regions were to have created regional informational and analytical centers—or RIATs in their Russian abbreviation—to deal with local radioactive waste problems.

Firms, institutes and other structures dealing with the production, use or burial of radioactive waste and materials were then, under the decree, to report on a regular basis to these RIATs organizations, or analytical centers. From there, the information was to go to Minatom and to officials in the executive structures of the subjects of the Federation, who were to be ultimately responsible for any political decisions.

Lukovnikov told the conference, however, that of 85 subjects of the Federation that have radioactively hazardous installations on their territory, 42, or fully half, have not created a RIATs, and that four subjects have created them but they are non-functional. RIATs are therefore functioning in only 39—or 45 percent—of Russias subjects.

These data from FSAN—which maintains supervision over compliance with Russian legislation relative to the handling of radioactive materials and waste by organizations of various levels throughout the country—were obtained by a GAN study conducted from 2002 through 2003.

Lukovnikov underscored that his data differed strongly from the FAEAs but said the reason for that was a more accurate system of evaluation on FSANs behalf. The RIATs system, after all, was envisioned as reporting to Minatom.

We consider that the RIATs system is created and functions only if there are corresponding decisions from the executive authorities and RIATs work is financed, Lukovnikov said.

Lukovnikovs statement officially acknowledged that there is a problem in obtaining information about the availability, production, accrual and transfer of radioactive materials and radionuclide sources. It also acknowledged that there is little information about radioactive waste, the accrual of radionuclides within the environment, and territorial contamination caused by them. After all—as Lukovnikov not so subtilely hinted—the compilation of such information is the responsibility of the RIATs system.

During a question and answer period during the conference, a representative of the Perm RIATs asked what percent of RIATs facilities were financed on a sustainable basis.

Lukovnikov said: It is hard for me to say anything because it seems to me that it is not distinctly defined who pays for what.

He went on to criticize the minimal understanding that executive authorities in Russias subjects possess of guaranteeing their populations safety from radiation hazards, and said that the RIATs system must not only to count and monitor sources of radioactivity, but to furnish executive powers with information necessary for them to make educated administrative decisions in the event of an emergency situation

In all actuality, this part of the system doesnt work, Lukovnikov said. He added the suggestion that the FAEA and FSAN could jointly conduct training courses for regional leaders throughout Russia in order that they better understand the principles of government control over radioactive materials and waste.

As an example of how misinformed local bureaucrats can be about the RIATs system, Lukovnikov recounted how he was contacted by the executive authorities in Kalinigrad region, who proposed that the Northern European Administration of FSAN act as Kaliningrads RIATs and then asked how much such a service would cost.

New norms?
Lukovnikov said that FSAN had worked out a number of addenda in existing normative acts, as well as new forms of accountability for organizations dealing with radioactive waste and materials, which he presented at the seminar.

This doesnt concern nuclear materials, but it does concern spent nuclear fuel because this is, in fact, a variant of radioactive waste, Lukovnikov said.

Actually, what Lukovnikov presented varies with what is outlined in the Ministry of Healths Fundamental Sanitary Rules of Maintaining Radiation Safety—or OSPORB in its Russian abbreviation—which provide for accountability and safety regulations. This caused visible confusion among regional delegates and one shouted in what form are we to account [to authorities] now?

Agapov was once again at the ready with a wry retort, saying, Gosatomnadzor is great, and therefore should not be confuse with OSPORB, The delegates, still without an answer, whispered among themselves. 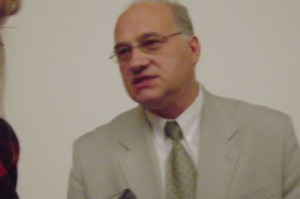 What, finally, are trying to build?
We understand that legislation, to well-known degree, is overabundant with regard to not very dangerous materials, said Agapov, adding that this situation must be reviewed.

Sparring with Agapov, Lukovnikov said: As a specialist, I still dont understand what we are trying to build, finally. Alexander Mikhailovich [Agapov] thinks that while accounting [for materials] we should cut out the small change and only pay attention to the big stuff.

Has anyone in the course of creating the system of accounting for radioactive waste and material evaluated the potential harm from the absence of this system and it worth? We have to decide whether we base our judgement on the tangibale money allocated for this system or on the harm that, as we well know, can be inflicted  Lukovnikov added.

He was supported by his colleague, the head of the FAEA training centre in St. Petersburg, Yury Lisnenko.

–> Meanwhile, data from the Yakutia Administration alone, and relative only to the northern shipping route, indicates that the region has lost control over 25 radioactive generators—so called RTGs. Each of these RTGs contain at minimum 40,000 curies of strontium-90.

The risk of this kind of theft has become especially accute, largely because it cab happen almost entirely unnoticed.

On March 12th 2003, the same day that Minister of Atomic Energy Alexander Rumyantsev was expressing concerns about security of nuclear materials in a speech to a conference in Vienna, Austria, military personnel at the Leningrad Naval Base discovered a vandalised lighthouse near Kurgolovo, a settlement on the shore of the Baltic Sea, on the Cape of Pihlisaar on the Kurgalsky Peninsula.

The last scheduled inspection of the lighthouse, which operated on a Beta-M generator, prior to this discovery, was conducted in June, 2002. The thieves, attracted by the apparently simple prospect of looting some non-ferrous metals, stole around 500 kilograms of stainless steel, aluminium and lead. As for the radioactive power element, they threw it out into the frozen sea some 200 metres away from the lighthouse. The “hot” strontium capsule melted the ice and went down to the sea floor. But even though the ice covering the spot where the RHS sank was one metre thick ice over, the gamma radiation exposure dose rate directly above the sunken unit reached over 30 R/h.

On March 28th, the radioactive element was raised to the surface with the help of a simple shovel and a pitchfork, both equipped with extended handles. It was then loaded on a sleigh, which took it several kilometres across the steep and barely passable shoreline toward the main road, where it was finally put into a lead container. The shell of the strontium battery turned out to be undamaged.

Vladimir Kuznetsov, a former inspector with GAN who presently works with the Russian branch of the environmental organization Green Cross said: On average, they lose and find 10 [radiation] sources a year.But as for the radioactive waste, this information is inaccessible.”

Kuznetsov pointed out that Green Cross, since 1993, has been carrying on an independent audit of what they term “anomalies” which is applied to thefts of sources, errors in documentation, damages and other violations of regulations governing radioactive sources.

In 2000, according to Green Cross data, six thefts of ionizing radiation sources occurred. Another six occurred in 2002. The most radioactive source registered by Green Cross was the Beta-M generator stolen from the lighthouse.