The Environmental Rights Center Bellona publicized Wednesday a scathing report on the state of the Leningrad Nuclear Power Plant, or LNPP, written by a 27-year veteran plant worker-turned whistleblower who was sacked in 2000 for his tireless efforts to expose the truly crumbling state of the plant, which runs four fatally flawed Chernobyl-style RBMK-1000 reactors. 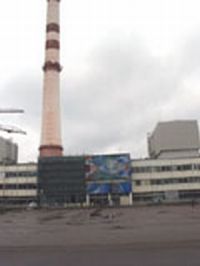 The plant is located a mere 70 kilometres west of St Petersburg’s 5 million citizens in the town of Sosnovy Bor, yet it remains an informational black hole for those seeking information about it’s activities, the state of its reactors—some of which have long surpassed their engineering life span—the waste that it routinely pours into the Gulf of Finland, and other radioactive industries that run on its territory.

With the publication of this report, entitled "The Leningrad Nuclear Power Plant as a Mirror of Atomic Energy in Russia," by Sergei Kharitonov, many of these questions are answered, and still others are raised. But most importantly, Kharitonov writes, the condition of the Leningrad plant offers into the condition of Russia’s nuclear power industry and the nine other plants that it runs.

The plant’s 30-year anniversary
Last December, the LNPP—still bearing the moniker of Vladimir Lenin—celebrated its 30th year of service with great pomp and circumstance and enumerated its accomplishments.

They reveled in memories about the furious pace at which they built the plant’s first reactor "on the spongy, swampy shores of the Gulf of Finland" just in time for 1973’s Energy Day holiday.

They trumpeted their own horns about how the LNPP is the primary source of electricity Russia’s Northwestern region, supplying some 50 percent of the energy to St Petersburg and the Connecticut-sized Leningrad region.

Kharitonov’s report is a reply to those victorious revelries.

"We didn’t take on the task of tarring everything that goes on at LNPP," said Kharitonov, in an interview with Bellona Web. "Our task was different—to understand to what extent the information coming from official sources corresponds to reality."

Kharitonov, who works at ERC Bellona, Bellona’s St Peterrsburg office, went on to say that "we are certain that society—normal people—must have credible information about everything that takes place at the radiological and radioactively dangerous sites they and their families live next to."

Indeed, it is more frequently than not that announcements made by the administration of the LNPP depart from the reality of the situation.

"The management of LNPP announces that ‘the organisation in operation LNPP is using the atomic plant only for the purposes for which it was conceived and engineered,’ and at the same time they are building the Ekomet-S factory for recycling solid radioactive waste, a unit for dismantling fuel assemblies, and an additional storage unit for spent nuclear fuel," said ERC Bellona Director Alexander Nikitin.

"Even a non-specialist understands that the noted industries have nothing to do with the fundamental goals for which the station was conceived and engineered—the production of electric energy."

While working on the report, Kharitonov said he and ERC Bellona worked with a void of information.

"You can notice that the report supplies facts and describes events that occurred some time ago," said Kharitonov. "More recently, the LNPP administration, referring to the danger of terrorism, have shut down the public’s access to LNPP," said Kharitonov. "That is absolutely impermissible."

30 years of engineered lifespan
The 30th anniversary of the LNPP isn’t just a nice round number for a birthday. It is also the engineered lifespan of the plant’s first reactor that, having been reached—in the opinions of its development engineers and builders—now means the reactor should be stopped and taken off the grid.

But the Ministry of Atomic Energy, or Minatom’s, plans to extend the LNPP’s decaying reactors’ service periods another five to 15 years has alarmed the environmentally-minded public and raises a host of disturbing questions. For instance, why hasn’t the LNPP’s first reactor been taken out of service? Why does Minatom want to extend the LNPPs over-extended reactors’ periods of service—for perhaps as much as 15 years? Is Minatom hurting for decommissioning funding?

The LNPP’s No 1 power bloc operates a first generation RMBK-1000 reactor, which is the same type of fatally-flawed reactor that exploded at Chernobyl in 1986. In fact, the LNPP’s No 1 reactor is even older than the one that cause humanity’s worst nuclear accident to date. It was precisely the RBMK-1000 reactor that Igor Kurchatov, the father of Russian nuclear science, was referring to when he said "we say ‘atomic energy,’ but imply atomic bomb—we say ‘peaceful atomic energy’ and imply nuclear submarines."

Currently, the LNPP’s No 1 bloc is undergoing repairs. The plant’s management plan to finish the repairs and modernizations this summer and then apply to Gosatomnadzor, or GAN, Russia’s nuclear regulatory agency, for a license to extend the reactor’s life-span.

Conjecture would indicate that—as a result of recent management reshuffles at GAN that have put former Minatom brass in charge—obtaining the license will not be difficult.

Late last year, the government of Vladimir Putin sent GAN’s former chief, Yury Vishnevsky into retirement, even though he had been promised another five years at the agency’s helm. Vishnevsky had guided GAN though the agency through the democratic reforms of the early 1990s, and had resisted for a decade, mostly unsuccessfully, Minatom’s efforts to sideline GAN’s responsibilities. In his place, appointed straight from the ranks of first deputy minister of Minatom, came Andrei Malyshev.

Two weeks ago, Malyshev sent Alexander Dmitriyev—one of the worlds foremost authorities on plutonium disposition—into retirement, even though his contract indicated he would remain at his post until March 2004, sources familiar with the incident told Bellona Web. In Dmitriyev’s place, Malyshev appointed Valery Bezzubtsev, who, until being tapped by Malyshev, had been a department head at Minatom. Other reshuffles in GAN’s offices throughout Russia are also taking place.

As for the LNPP’s reactor bloc No 1, the issue isn’t really the fact that it is totally unsafe for the reactor to continue work past its 30-year engineered lifespan. The Russian law "On the Use of Atomic Energy" does not, in fact, contain any language on the engineering life-spans of nuclear power plans. According to the law, it is not important how long a nuclear power plant works so long as it works safely and without safety violations. This is the legal criteria that guides GAN as it considers whether to grant extension licenses to aging reactors.

"Acording to the information on hand, including that collected by Kharitonov, violations at LNPP are the usual practice," said former GAN inspector and respected Russian environmentalist, Vladimir Kuznetsov in an interview with Bellona Web.

Data about these violations and incidents at the LNPP are collected and documented in the newly released report by Kharitonov.

One example is the well known incident that occurred at the No 1 bloc—the birthday bloc—on November 30th 1975. In this incident, a fuel assembly was destroyed accidentally, releasing some 137,000 to 1.5 million curies into the surrounding environment.

Within the last few years, a number of other serious violations at the plant have been uncovered. In May of 2000, reactor No 1 was shut down because someone had left a piece of rubber in the passageway through which nuclear fuel is put into the reactor. A replacement of radiation detectors on reactor bloc No 3 let to that bloc’s shut down once it was discovered that the detectors had been replaced with old rather than new ones. As was later revealed, the new radiation monitors meant for bloc No 3 had been stolen and sold to a different nuclear power plant. A criminal case was initiated.

In late 2003, conversation turned to inexplicable commercial schemes of buying reactor equipment. In this late 2003 case, the concerned equipment were so called servo motor units purchased though a middleman at prices inflated to five times the market value. These same servo units were later stolen from the plant. Each one of these violations and incidents could lead to unimaginable consequences for the 63,000 residents of Sosnovy Bor, the 5 million in St Petersburg, and for Northwest Russia in general. 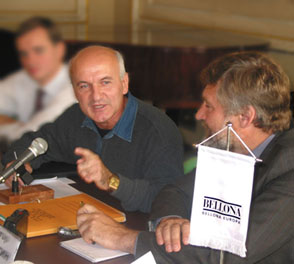 Sergei Kharitonov
The report’s author is a former employee of the LNPP, and worked there from 1973 until 2000 as an operator of the spent nuclear fuel storage unit. He was also a liquidator at Chernobyl and was honored for his work there as well as for his work at the LNPP. He is also an environmental activist, who was harassed at the plant, resulting in his eventual firing for his outspoken critiques of the plant’s violations and oversights and his commitment to working according to the book.

From November 1997 to his firing in March 2000, Kharitonov was forced to spend his working hours in the changing room were workers left their work clothing each day. This "office" was revenge from LNPP management, who had grown tired of his insistence on doing his job according to the book and refused to fulfill the tasks handed to him by management that were not in accord with the standards of working at a nuclear site. When it became apparent that LNPP management had no intention of listening to him, he took his story to the press. Almost immediately following, Kharitonov was barred from going any further into the plant than the changing room, but they could not fire him. Meanwhile, the plant continued to illegally stuff its spent nuclear fuel storage beyond capacity.

LNPP tried five times to fire Kharitonov for his environmental activism and fined him seven times, depriving him little by little of his income. The illegality of LNPP management was proved in court twice, first in 1998, when Kharitonov won moral damages from the plant’s administration. On June 9th 2000, Kharitonov was illegally removed from his position at LNPP.