Officials in Murmansk work to tie sunken ships to their owners

The Murmansk Region has a new message for ship owners that have littered parts of the Kola Peninsula’s coast and waters with the hulks of abandoned and sunken boats and ships: We will find you. 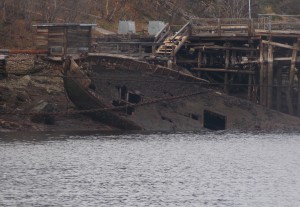 A ship dump on the Kola Peninsula (Photo: RosRAO)

The Murmansk Region has a new message for ship owners that have littered parts of the Kola Peninsula’s coast and waters with the hulks of abandoned and sunken boats and ships: We will find you.

To track down who is responsible for any of the 97 ships that lay listing on beaches or sunken in the waters off Murmansk, the area is forming a broad working group among prosecutors, environmental oversight agencies, port authorities, emergency officials and radioactive waste handlers.

The new working group, called “Liquidating the nuclear legacy of the Arctic,” stems from a 2014 governmental decree on targeting contamination and other dangerous impacts on the environment in the waters surrounding the Murmansk Region and continues a pilot program that started last year.

Russia’s state nuclear waste handler RosRAO is part of the group, though the group is not involved in locating or raising any of the significant amounts of radioactive waste dumped into the Arctic by the Soviet Navy. That waste included some 17,000 containers of nuclear waste and two entire nuclear submarines, the K-157, which sunk in 2003, and the K-27, which was scuttled on purpose more than three decades ago.

The government has given the pilot program looking for non-nuclear ships modest funding to start out – 50 million rubles, or $876,000 – but that is expected to increase dramatically once a strategies for disposing of vessels and cleaning up Kola Bay water are devised.

The project’s first stages began in 2016. By the end of that year, members of the working group charted 48 sunken boats and ships, along with 48 more languishing in shallows or along seashore. 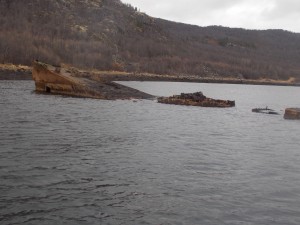 A half sunken ship on the Kola Peninsula. (PhotoL RosRAO)

They were then ranked by their perceived impact on Kola Bay, and by the danger they pose to other ships navigating the waterways. The working group has also outlined a waterway cleanup program.

A major focus of the pilot program in 2017 will be taming a dump of ship metal on the northern Kola Peninsula, near the village of Retinskoye. This will be the first major project in waterway cleaning and toward eliminating the environmental impact of old ships in the area.

The Retinskoye project follows on public hearings held in the area in January. As a rural area, the hearings were attended by a mere seven people, but they nonetheless laid out plans for raising the maritime cast-offs. A governmental environmental analysis is expected in April.

According to project leader Vladimir Khadobin, the governmental analysis will go to the Federal Agency for Water Resources once it’s complete so that the wreck raising plans can get their official permission.

Khadobin, acknowledged that the project might seem to be slow in the coming to outside observers, but he said that’s because it’s still just a pilot program.

“It’s not very big, but within it we must work out all possible tasks, including legal issues,” he said. Key among the group’s tasks, he said, were tracing ownership of the abandoned vessels. Owners, when found, are responsible for the cost of raising their wrecks. But when they cannot be located, the cost gets passed onto the state.

Khadobin said the group would complete raising the wrecks off Retinskoye during the summer, but he cautioned that not all wrecks near Murmansk could be brought up from the depths.

“If [the ships] are on the bottom of the ocean, then it must be evaluated if they pose an environmental or navigational risk,” Khadobin said. If not, they can be left where they are.

But those ships that have been stranded in shallow waters, said Khadobin, and which pose a visual nuisance are the vessels that will be removed first, he said.