Russia’s state nuclear corporation Rosatom is looking to rectify the fact that the country has nowhere to safely store some several million cubic meters of radioactive waste on a long term basis in a way that would render it harmless to the public, and has begun a massive citing process, Bellona has learned.

Published on November 18, 2013 by Charles Digges

Currently, Russia has nowhere to store radioactive waste and spent nuclear fuel besides at temporary on-site facilities at the nuclear power plants, research facilities, medical facilities using radiological equipment, and other nuclear installations that have produced it.

But under a new “roadmap” announced late last month, Rosatom is exploring the possibility of building some 30 long-term repositories as well as temporary waste storage facilities, 10 of which would be located in Northwest Russia, close to Norway and Finland.

Russia’s 2011 law “On the handling of radioactive waste and spent nuclear fuel” stipulates that several so-called “Points of Radioactive Waste Burial” or PZROs in their Russian acronym, be established.

Alexander Nikitin, chairman of the Environment and Rights Center (ERC) Bellona in St. Petersburg, both attended last month’s Rosatom-hosted annual AtomEco conference, and also made presentations on radioactive waste storage to the 1,000 specialists who were invited.

According to Nikitin and observers, Rosatom head Sergei Kiriyeko paid special attention to Nikitin’s words on the subject.

According to Nikitin, there is a semantic battle raging over just what to call the storage facilities that Rosatom is currently examining.

“When we talk about PZROs as defined by the 2011 law, the documentation refers to them in different ways,” said Nikitin in an interview. “Some call them ‘final storage’ facilities where others call them ‘repositories.’”

And there are swathes of documentation to wade through, said Nikitin. But the lack of agreement, said Nikitin, was understandable, as the agency that is now charged with handling all manner of radioactive waste was established only a year and a half ago.

Repositories define the preferred international nomenclature for deep geological formations where radioactive waste will be buried effectively forever, sealed in underground chambers where it will theoretically never disturb the environment again –  or at least for several thousand years.

Few countries have undertaken to build such facilities and only one – Finland – is actually in the process of constructing one.

For all intents and purposes, the lack of such repositories constitutes one of the top most pressing environmental concerns relative to nuclear power, as most radioactive waste and spent nuclear fuel remains lethally toxic for dozens if not hundreds of thousands of years to come.

When it comes to siting and building such facilities in Russia, Nikitin says Rosatom is long on plans but short on having the tools to actually put them into use – to say nothing of attempts to resolve the concept of what a PZRO actually means.

At Atomeco, Nikitin proposed that whatever Rosatom ends up calling them in the end, they must have certain characteristics in common.

“These PZROs must be storage facilities that can hold radioactive waste for at least a 1,000 years,” he said. “Moreover, they have to be adaptable to fuel removal in case of any kind of disturbance.”

Among these disturbances, Nikitin identified geological events such as earthquakes, or later discoveries that a given storage facility’s geological characteristics are not up to snuff.

Under the 2011 Russian law on radioactive waste and spent nuclear fuel handling, the so-called National Operator, an entity that does nothing but deal with radioactive waste storage issues, was established as an enterprise of Rosatom.

Of 30 sites considered, nothing is yet final

Nikitin said that of the 30 sites the National Operator is currently studying – Rosatom’s predictions aside – the enterprise has yet to come up with anything concrete.

So far, the most closely studied repository sites are, said Nikitin, are two in the Leningrad Region town of Sosnovy Bor, which hosts the Leningrad Nuclear Power Plant, and one in the Krasnoyarsk Region, near the closed city of Zheleznogorsk where plans are currently underway to store and reprocess spent nuclear fuel from VVER-1000 and Chernobyl-type RBMK reactors.

The one in Krasnoyarsk would be a long term PZRO for long-lived radioactive waste. One of the two planned for the Leningrad region, supposedly ready for use in 2014, would be a semi-surface clay barrier site, which would handle medium-level radioactive waste, Nikitin said.

He said the other planned for the Leningrad region, which was not specified in Rosatom’s documentation, would be much the same.

Injection of radwaste into the ground must be stopped

Nikitin said the 2011 law also provided for radioactive waste injection into underground geological formations, called the geographical horizon, at three sites: one in Krasnoyarsk near Zheleznogorsk, Tomsk, also in Siberia, and one at Dimitrovgrad, in the Ulyanovsk Region southwest of Moscow.

The practice is paid for by each of the facilities.

First, he said, the International Atomic Energy Agency (IAEA) does not recognized injection as a method of effective radioactive waste storage.

But he also said that the there is a bifurcation of opinion in Russia as to what the IAEA’s actual role in determining such questions is.

“On the one hand, there are many that say ‘the IAEA says this, so we must do it,” Nikitin said. “Other’s say that the IAEA can only give recommendations, which can be ignored.”

Russia is the only country in the world that engages in the practice of injecting radioactive waste into the ground.

Nikitin said that instead of injection, radioactive waste must be brought together throughout the several sites proposed by Rosatom’s National Operator. He said he also supported a strong system of inventorying waste. 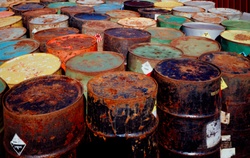 “On many occasions, it is difficult to figure out who the waste belongs too, especially if it has been lying around since Soviet times,” he said. “This creates problems with a chain of custody.”

“Who takes responsibility for what is even a problem at Mayak,” he said. “Often, it’s clear that spent nuclear fuel has come, for instance, from the navy, but poor documentation and lousy bureaucracy fails to establish the who is actually responsible for it now.”

A long time down the road

Nikitin said that the citing of storage and repositories for radioactive waste will take a long time, despite Rosatom’s apparently complete list of places the National Operator is considering.

Among the toughest hurdles, he said, will be winning over public opinion in areas where such facilities would be installed. This is an international problem. Finland’s system of building repositories – which more or less set the rules for the rest of the world – allows for the communities hosting them to back out at any stage of development.

Coordinating the storage spaces and repositories with local and national bureaucracies also will not happen overnight. Likewise, the waste will need to be moved to designated storage spots once they are agreed on, and this, according to Nikitin, could take decades.

The National Operator has established a working group to study the process of siting and building the PZROs, and Nikitin is a member of the group.

“So this will be our work for some time to come,” he said. “We’ll continue to facilitate good contacts with the National Operator, as well as consulting in places where public approval (for storage sites) will be required.”

In addition, he said that it was important for Bellona to insist that Russia build no new nuclear power plants until the issue of storage and repositories was sorted out.

“What to do with the radioactive waste until then, however, is a different question,” he said.

Aside from the temporary site in Sosnovy Bor in the Leningrad Region, Rosatom documents indicate plans to build PZROs throughout Northwest Russia in the Nenets Repubic, which would be a near surface site reinforced with permafrost and sandstone, and the Komi Republic, planned as a deep repository within crystalline rocks.

The remainder would be situated in the Arkangelsk Region and the Novaya Zemlya Archipelago, a former Soviet nuclear testing range. One planned in the Arkangelsk Region near the Belomorsko-Kuloyskoe Mountains would be a near surface recessed formation with a barrier made of clay; another planned near the Shengaliskoe Mountains would be a deep geologic repository in crystalline rock.

Novaya Zemlya would see another deep tunnel repository within crystalline rocks near the Matochkin Shar pass. Novaya Zemlya would also host a near surface trench facitity near Bashmachnaya Bay, whose geological barrier would consist of permafrost and sandstone.

This is the last article in a series on Rosatom’s new approaches to spent nuclear fuel reprocessing and radioactive waste storage.