MURMANSK – The Lepse vessel, the world’s most dangerous floating radioactive waste and spend nuclear storage ship continues to bob at dockside at the Nerpa Naval shipyard on Kola Bay, where its has remained for the last 10 months since being towed from Murmansk Harbor’s Atomflot port for dismantlement.

Published on June 10, 2013 by Alexey Pavlov, translated by Charles Digges 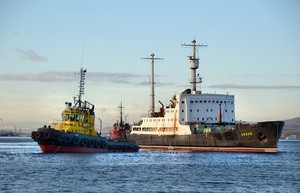 It was expected the Lepse would be taken immediately into dry-dock for the complex dismantlement procedure to begin. But after it was towed from the Atomflot nuclear icebreaker port in September – relieving Murmansk of one of its most pressing radiological hazards – for dismantlement at Nerpa, it was discovered the dry-dock awaiting the ship filled with nuclear trash, much of it in a damaged state demanding special technology to remove it, was occupied.

Atomflot had taken considerable pains to prepare the Lepse for towing to Nerpa: All the ships hatches were welded shut, aside from the main entrance, decontamination efforts were undertaken, extra shielding against radiation was installed, and waste that could be removed by conventional means was taken out, Oleg Khalimylin, deputy chief engineer at Atomflot told Bellona.

But the traffic jam for dry-dock space at Nerpa still lingers, delaying efforts to dismantle the nuclear graveyard. But the fault of the dragging process lies not with Nerpa, but no less than the Russian Ministry of Defense.

The SR3 dry-dock space at Nerpa where the complicated and delicate process of removing the spent nuclear fuel aboard the Lepse and cutting the vessel up is currently occupied by the legendary Soviet sub the Leninisky Komsomol, call sign K-3, project No. 627 – otherwise known as the Soviet Union’s first nuclear submarine, and the third to be built in the world.

The defense ministry has for the past five years been unable to decide what to do with the Leninsky Komsomol – either to dismantle it or to turn it into a museum piece in St. Petersburg. Russia’s military community is standing behind the museum notion, despite the fact that the defense ministry has for the past years refuse to finance any work on the vaunted submarine. Meanwhle, Nerpa has no other spaces available for the Leninsky Komsomol.

“For five years, no one has done anything real to decide the question of the Leninsky Komsomol. At current, there are discussions underway with [Russian state nuclear corporation] Rosatom and the Ministry of Defense,” Georgy Neyman, Nerpa’s chief engineer, told Bellona. “We involved the Russian Geographical Society, which initially forwarded the idea of turning the Leninsky Komsomol into a museum – and the head of the Russian Geographical Society is also Defense Minister Sergei Shoigu,” said Neyman, adding: “We are waiting for the military to finally understand that they are disturbing the implementation of a very serious international project in which enormous efforts have been invested.”

Over the past few days, members of the Public Council on Issues of Safe Atomic Energy Use in the Murmansk Region have again taken up discussion of this problem.

Specialists emphasize that further delays in the deadline on dismantling the Lepse could lead to major choke-holds on international financing for the project.

“It’s well known that the money for the Lepse project was earmarked by a group of countries and sponsors,” said Sergei Zhavoronkin, the Public Council’s secretary. “The chief administrator of these funds is the European Bank of Reconstruction and Development (EBRD) and recently its representative said this money is laying in their account with the expectation that work will commence,” he said, but added: “Where are the guarantees that the countries and sponsors won’t recall this funding? They won’t wait for work to begin forever.”

It remains, then, only to hope that the discussions over the fate of the Leninsky Komsomol wrap up this year, and that the vessel will free up space for the Lepse. And further, that the project will go, by necessity, rather simply.

The Public Council reached an agreement with the closed military city of Alexandrovsk, where the Nerpa Shipyard is located, to conduct a repeat environmental impact study relative to the Lepse’s dismantling.

The goal is to familiarize local residents with what will take place. The process of cutting up the Lepse and unloading damaged spend nuclear fuel assemblies is not expected to be simple. Removing the fuel is expected to be the most dangerous part of the project, and is a worry to the local community.

Experts do not expect to run into the kinds of problems they will encounter while dismantling the Lepse while they dismantle the Volodarsky, another solid nuclear waste containing ship that is moored at the Atomflot port.

Atomflot for several years prepared for its dismantlement, and as a result, only the hull of the vessel remains, free of the dangerous cargo it held. The hull is now being prepared for transport to Sayda Bay, where it will by cut up and buried under several tons of concrete slabs aside reactors from nuclear submarines. The work on the Volodarky is being undertaken by SevRAO, Northwest Russia’s nuclear waste handling facility, with which Atomflot is drawing up agreements.

The spot for the Volodarsky at Sayda bay has long been set aside, and it will be situated nearby the third floating nuclear waste storage vessel, the Lotta, which will is slated to be decommissioned next year. SevRAO said the project is already financed and planned.

Charles Digges and Anna Kireeva contributed to this report.