UPDATE: Serbian nuclear waste arrives at Murmansk port, ready to be dispatched for reprocessing at Mayak

MOSCOW – The Danish vessel Puma arrived at the Russian port of Murmansk Wednesday, carrying spent nuclear fuel (SNF) – a total of around 54 kilograms, according to most recent information – from a research reactor of the Belgrade-based Vinča nuclear research institute. The cargo is now to be transshipped into trains and travel across European Russia to the reprocessing plant Mayak in the Urals. The delivery is said to have cost Russia $3 million.

Published on December 15, 2010 by Andrey Ozharovsky, translated by Maria Kaminskaya 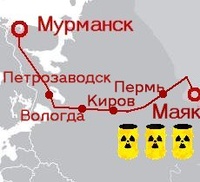 Contrary to the information made available to Bellona earlier this week, the total weight of the Serbian cargo is around 54 kilograms – three tonnes, including the container – not the 333 tones initially reported by Bellona on Wednesday. The updated information came from the Russian State Nuclear Corporation Rosatom, which is responsible for taking delivery of the Serbian waste and which declined to confirm or deny the transportation, or the amount being transported, when Bellona spoke to its representative prior to the containership’s arrival in Murmansk.

On Thursday, Rosatom published an official statement saying the Puma has docked in Murmansk and specialists with the state company Atomflot – Russia’s nuclear icebreaker operator – have begun unloading the cargo of spent nuclear fuel assemblies from the vessel’s holds.

A special-purpose train will further carry the hazardous radioactive materials through a number of cities in Russia’s north and further, across European Russia, to Chelyabinsk Region in the Urals, where the reprocessing plant Mayak is based.

The first report of the new spent nuclear fuel delivery came from Decommission, a cooperation project uniting several Russian environmental NGOs and Norges Naturvernforbund (Friends of the Earth Norway). The total weight of the delivery was 333 tonnes of waste, Decommission’s report said. 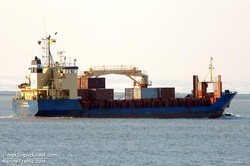 Because nuclear transportation is itself highly hazardous, environmentalists highlight those additional risks that Russia’s territories face as the cargoes make their way to Mayak. Residents in port cities such as Murmansk and St. Petersburg stage protests against nuclear waste deliveries arriving at their transit destinations in the ports, where containers with their dangerous load have to be transshipped and sent off to the Urals by train.

In Murmansk this week, the Puma’s arrival with a cargo of Serbian SNF was greeted with a one-man picket at a well-known location close to the port, organised by the local environmental NGO Priroda i Molodyozh (Nature and Youth).