ST. PETERSBURG – The Obama administration announced at a European security summit held in Astana, Kazakhastan that it had convinced the former Soviet republic of Belarus to give up some of its hotly contested stock of Soviet origin highly enriched uranium by 2012 and return it to Russia.

Published on December 15, 2010 by Tatyana Novikova 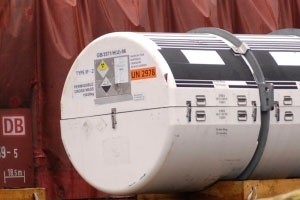 The US also endorsed Belarus’s aspirations to build a nuclear power plant, and said it would cooperate with the neo-Stalinist nation in this endeavour.

But whether much convincing of Belarus had to be done remains in question, and Belarusian President Alexander Lukashenko’s proffering of his country’s uranium stockpiles as a bargaining chip for American nuclear power plant construction know-how is well documented.

At the early December meeting of the Organization for Security and Cooperation in Europe (OSCE), Belarus obligated itself to liquidate its stocks of highly enriched uranium (HEU) as per an agreement signed between Belarusian Foreign Minister Sergei Martynov and US Secretary of State Hillary Clinton.

The text of the agreement states that Belarus will liquidate its HEU stocks by the next OSCE summit slated for 2012, and that the United States will provide financial and logistical support. The HEU in question has been in Belarus since Soviet times and was used for research purposes.

Yet, questions remain as to how much of this stockpile is enriched to 90 percent, the enrichment level required for nuclear weapons.

Researchers at the James Martin Centre for Nonproferation studies told the New York Times last week that some 40 kilograms of the Belarus uranium stockpile is enriched to weapons grade.

The United State has agreed to transport some 220 kilograms of highly enriched uranium to Russia, where will be down-blended to a less enriched grade.

According to the BELTA Belarusian news agency, uranium of various stages of enrichment were brought to Belarus in Soviet times. According to the Aliya Malikhina scientific institute in Belarus, Belarus possesses about two tons of uranium, which was accrued between 1954 and 1987.

Lukashenko announced last spring that his country possessed a large amount of HEU, and that its storage was overseen by the International Atomic Energy Agency (IAEA) and was quoted as saying by Interfax that Belarus possesses “hundreds of kilograms that are factually weapons grade and less enriched.”

In April, Lukashenko made known that he viewed his uranium stocks as being useful in many capacities, His attitude about surrendering to his HEU to Russia via the joint Russian-American Global Threat Reduction Initiative, which aims to repatriate Soviet origin spent research reactor fuel worldwide, was far from cooperative.

“Some people tell me: send the uranium out. I say: in the first place, why are you dictating to us, this is after all our commodity. We are storing it under [International Atomic Energy Agency] monitoring,” said Lukashenko in remarks reported last April by Interfax.

“We are not planning to make a dirty bomb and we are not planning on selling it to anyone. I say I have already given up nuclear weapons. And what do we have as a result? We are not a banana republic and can keep, as we have for 20 years, this nuclear material,”

Lukashenko continued to say in the interview that if his country had maintained its nuclear arsenal, Belarus would be treated differently. He then coyly hinted that nuclear weapons were “a valuable commodity” that Belarus should have sold “properly.”

It is not a far leap to discern that Lukashenko’s surrendering of Belarus’s HEU is expected bring some kind of profit.

Deft US diplomacy or an empty bill of sale?

The HEU transfer agreement has been hailed in US media as a major achievement for the United States, and the Obama Administration in particular.

But the diplomatic coup of last week is not what it seems, and owed more to Lukashenko’s desire to have access to nuclear power than diplomatic brinksmanship. But in his apparent haste, many say the Belarusian president failed to read the fine print.

A Belarusian government official who spoke anonymously with the Associated Press said that part of the repatriation bargain with the US was honouring a request by Belarus for information on how to build nuclear reactors operating on low enriched uranium.

Another anonymous official, this one with the US State department, told the New York Times that the US would be providing Belarus with information on constructing a nuclear power plant with the goal of weaning the former Soviet republic off its dependence on Russia’s natural gas.

The underpinnings of the apparent trade of HEU for the know-how to build a nuclear power plant quickly ignited pundits who are sceptical that America will assist Belarus in its goal.

“I don’t think that there will be any action behind this announcement,” Georgy Lepin, a nuclear energy specialist, told Bellona Web. “And the problems are linked not to whether or not America will help, but to the fact that Belarus has no resources for building a nuclear power plant.”

What the US agreed to in writing

For all intent and purposes, however, the agreement signed last week between Belarus and the United States only goes so far. The United States does promise to furnish know-how, but only as far as building research reactors that run on low-enriched uranium is concerned.

As for building nuclear power plants, the United States has only agreed to “strengthen global cooperation in the area of the peaceful use of nuclear energy” and “to support this activity, which includes a competitive design process and the construction of reliable and safe [nuclear power] stations operating in accord with the guarantees of the IAEA. The United States supports the efforts of Belarus toward possible speedy realization of this commercial project.”

Promising Belarus support in its efforts to “participate in program that includes a competitive design process” is a fairly empty phrase. Belarus has indeed selected a design called AES-2006 from a Russian contractor for the construction of a nuclear power plant, and suggested that it sell energy to Lithuania. But that country is enraged that Belarus would build a nuclear power plant near its borders and its capital Vilnius.

But perhaps a bigger problem with Belarus ever seeing any assistance from the United States in building a nuclear power plant lies in a clause of last week’s agreement concerning human rights, which reads: “The United States hopes to see significant progress in [the area of human rights] specifically in matters guaranteeing moves toward conducting a presidential election in Belarus in December corresponding to international standards.”

It may be suggested that Lukashenko, who stands again for office in 2011, and who has risen and re-risen to power on the backs of rigged elections, sold the commodity of his highly enriched uranium on the cheap.