ST. PETERSBURG – The opening of the “Atomic Energy: Society and Security” forum in St. Petersburg yesterday was marked by vivid protests from environmentalists who wanted to make sure it was known there was plenty of disagreement between society and Russia’s state nuclear corporation Rosatom.

During a press briefing by Igor Konyshev, Rosatom’s department head for liasons with the public and regions, environmentalists dramatically expressed their protest of illegal waste imports into Russia by marching a banner onto the stage behind the podium from where Konyshev spoke.

Though security personnel, tried to remove the activists, they remained in place, holding a banner reading “St. Petersburg Received Radioactive Waste from Germany,” in reference to the almost monthly shipments of depleted uranium hexafluoride, or uranium tails, shipped to Russia form the German enrichment firm Urenco.

The shipments have garnered a groundswell of protest from environmental organisations, which have ended in arrests while activists have managed to establish that the loads – which remain parked in rail switch yards in bustling St. Petersburg neighborhoods after being unloaded from freighters – cause a 10 to 30 time jump above normal levels background radiation.

During Monday’s forum, activists marched the banner onto the stage while Konyshev was taking a question about the German shipments. 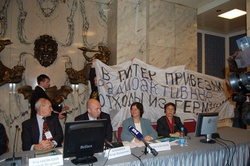 “I have said, and say, that we do not import radioactive waste. Deplete uranium hexafluoride is valuable raw material,” for reprocessing, said Konyshev at the beginning his answer.

While he was speaking, the activists took up positions behind him with their banner, creating a juxtaposition of young, smiling environmentalists and their hand painted perfunctory banner and the tailored corporate presence of those sitting on the panel – an intrusion of raw fact into the coordinated PR event.

Depiste the attempts of security to remove the activists and stop the protest, the environmentalists held their positions and the banner loomed being nuclear industry representatives and Sergei Baranovsky from Green Cross, the single purported representative of environmental concerns in the group,

Russia is the single country in the world that takes depleted uranium hexafluoride from abroad on an industrial scale. The country has managed to pile up 700,000 tons of uranium tails for which there are – in contradiction of Konyshev’s statement at the conference – no further plans for reprocessing.

This fact qualifies the regular imports of depleted uranium hexafluoride from Germany’s Urenco enrichment facility as radioactive waste under Russian legislation, and the import of radioactive waste into Russia is prohibited by law.

Russia’s law “On the use of Nuclear Energy” stipulates as waste nuclear materials and radioactive substances for which no further plans are envisioned.

“The forum opening today in St. Petersburg on the eve of the anniversary of the Chernobyl disaster was called to whitewash nuclear industry workers,” Andrei Ozharovsky from the environmental group Ecodefence.

Bellona St. Petersburg director Alexander Nikitin posed Konyshev the question of why Rosatom’s Federal Target Programme on “Guaranteeing Atomic and Radiation Safety for 2008 to 2025” had been classified as “for official use,” meaning that it is not available for public viewing.

Responding in a audibly irritated tone, Konyshev said: “Until now, not a single civil society organisation has addressed me in order that this classification be lifted – if such an appeal is received, we will review it.”

Yevgeny Yevstratov, Rosatom’s assistant director, rushed to add vaguely that: “we have not shut out the programme for the public, we just classified it “for official use.”

In the plenary reports at the opening of the forum, Rosatom’s Konyshev, Yevstratov and former Duma ecological committee hear, Vladimir Grachev, spoke of the necessity of a nuclear renaissance.

The organisers of yesterday’s forum where Rosatom and Green Cross, an environmental organization founded by Mikail Gorbachev, the Soviet Union’s last premier, which has, of late, distinguished itself by approving every plan forwarded by Rostatom.

This is a radical departure from earlier collaborations by Bellona with Green Cross member Vladimir Kuznetsov. Green Cross’s US office was also an instrumental participant in the June 2005 Washington, DC release of Bellona’s report “The Russian Nuclear Industry: The Need for Reform,” which examined the entire Russian nuclear fuel cycle in an unfavorable light.

In March 2007, the so-called public council of Rosatom, which includes representatives from several environmental organizations, including Green Cross, discussed the possibility of building more nuclear power plants in Russia.

According to council member and Green Cross head Baranovsky, the proposal was roundly endorsed, and his word were reported widely in the Russian media. However, one member of this council, Valery Menshikov, quickly denied these reports, saying that no approval to build new nuclear power plants had been given, and that, in fact, discussions of documents about it had been shelved because of a lack of time.