Published on January 13, 2003 by Charles Digges 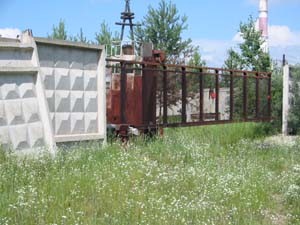 The security failure led to an emergency visit to the combine by Siberian region presidential envoy Leonid Drachevsky.

The mock attack, a favourite method of the FSB to test security readiness, underscored what many environmental activists, Yabloko party Duma deputies and Gosatomnadzor (GAN), Russia’s nuclear regulatory agency, have asserted repeatedly over the past year — that security at the RT-2 spent fuel storage facility at Zheleznogorsk is woefully inadequate. It also is bound to fan fires of international fear regarding the security of Russia’s nuclear installations, which, despite a decade of western aid, remain largely vulnerable to intrusion.

At the heart of the problem, say environmentalists, is Moscow’s paltry budget for securing non-military nuclear waste storage facilities in Russia. Indeed, while Zheleznogorsk has received several million dollars in western aid to both secure weapons-grade plutonium and to shut down its ADE-2 plutonium reactor, spent fuel protection remains Russia’s burden. And despite several public exposures of RT-2’s flagging security last year by environmentalists, the FSB raid proves that no efforts have been undertaken to bolster protection.

According to the FSB spokesman, agents dressed as “a guerrilla operations group” were able to enter Zheleznogorsk through a hole in fences that surround the closed nuclear city, some 40 kilometres from Krasnoyarsk in Central Siberia. With them, agents carried a “convincing replica of a bomb,” which they laid next to the RT-2 spent nuclear fuel (SNF) storage facility.

“The agents came and left without being stopped, or even seeing any guards,” the FSB spokesman said. “Of course, this is a rather dangerous situation.”

This most recent breach of security at Zheleznogorsk flies in the face of repeated assurances from Zheleznogorsk officials and representatives of the Ministry of Atomic Energy, or Minatom, who have said that security at the combine is impenetrable. Minatom was responding to reports by Greenpeace that it had a number of times over the past year visited RT-2 by sliding through security fences and past guards without notice. 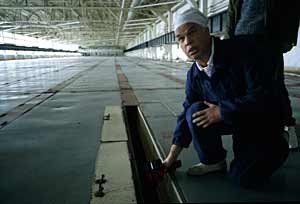 On one of these visits, Yabloko Duma Deputy Sergei Mitrokhin and a camera crew from Russia’s NTV television accompanied the activists. Mitrokhin and his group walked into RT-2 via a two-by-two-meter hole in the security fence and followed a well-worn footpath that took them directly into the facility. Once there, they posed for pictures next to 3,000 tonnes of highly radioactive spent nuclear fuel.

In the fervour that ensued after NTV aired their report of the visit, Zheleznogorsk officials conducted “thorough” investigations and announced their conclusion that the visit had never occurred, despite the videotaped and televised proof of the visit. Other security breaches at RT-2, enacted and publicized by environmentalists, evoked similar denials from officials that the breaches had never taken place and that the fences surrounding RT-2 were intact.

After the FSB’s “training visit,” however, some Zheleznogorsk officials backed away from their repeated claims that security breaches are impossible at RT-2.

“The security at the storage facility has definite defects. We knew about this,” Pavel Morozov, spokesman for the Zheleznogorsk Chemical Combine and author of previous denials regarding RT-2’s poor security, told Krasnoyarsk’s Komok newspaper. An unnamed high-ranking official at the Zheleznogorsk combine, who was also quoted by the paper, said the combine had received early warning from the FSB about the planting of the fake bomb, but said that no special preparations were made because of the exercise’s “clear pointlessness.”

Mitrokhin was not surprised by the FSB’s interest — albeit belated — in examining RT-2’s security. Mitrokhin suggested that the safety concerns at Zheleznogorsk stem from Minatom’s systematic aversion to paying for upgrades because buttressing protection siphons off profit.

“The problem of guarding dangerous facilities is not a secret for the upper echelons of the atomic ministry. However, saving ‘the honour of the uniform,’ they adhere to tactics of hushing existing problems,” Mitrokhin said in a statement last week. 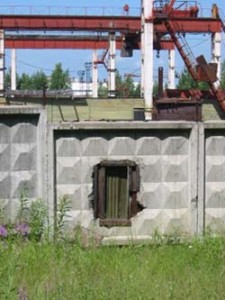 “This system of hushing the problem and of outright lies is tied to the fact that the ministry has actually turned into a business structure, the masters of which aim to lower expenses and increase profitability by under-financing safety,” he continued.

Mitrokhin pointed out that the economics of the nuclear industry is such that only energy production receives anything close to adequate financing. “All remaining phases of the nuclear fuel cycle are, in relation to nuclear power plants, discriminated.”

As evidence of this, Mitrokhin noted that salaries of workers at Zheleznogorsk are some three times lower than salaries received by workers at nuclear power plants.

“At the same time, Minatom is realizing a host of programmes — like the construction of new nuclear power plants and importing foreign SNF — which increase the danger of a man-made radioactive accident,” he said.

During Duma debates on the 2002 budget, the Yabloko party was nearly alone in advocating increased expenditures for nuclear safety. Indeed, by Minatom’s own estimates, upgrading security at RT-2 would cost nearly $32m — almost half of the $70m that the Duma budgeted for nuclear safety at both civilian and military installations for 2003.

But even that $70m would appear to be spoken for already — as part of Minatom’s efforts to fully dismantle decommissioned submarines in the Pacific Fleet, the ministry plans to begin construction of a $70m storage base for submarine reactors. Moscow hopes to drum up international support for this endeavour, but no deals have been concluded so far.

While dimly confirming RT-2′ security defects, Zheleznogorsk officials nonetheless demur at the suggestion that a bomb placed in the storage facility would result in disaster. Specialists from the combine, in remarks to Komok newspaper, said that a bomb explosion inside the base would fail to produce a nuclear chain reaction and that contamination would be limited to the SNF storage pool.

But according to environmentalists, that is a debatable point.

“They have always told us that we are groundlessly fanning panic among people,” Vladimir Mikheyev, head of the Zheleznogorsk-based Citizens’ Centre for Non-Proliferation, told Komok.

“But what would happen if it were not a mock-up but a real bomb? What kind of catastrophe would occur throughout the whole region if an SNF storage site was exploded?”