A government agreement with Ukraine has paved the way for the first round of spent nuclear fuel (SNF) imports to Russia from Bulgaria’s Kozlodui nuclear power plant since a financial scandal about payments for past shipments shut them down last year. The shipments, routed through Ukraine, are expected to resume by the end of this year, Bulgarian officials said Monday. 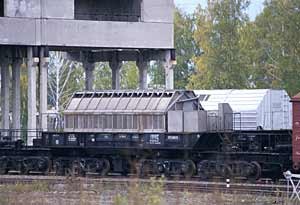 But the parameters of the plan, as outlined by one Bulgarian official, hint at a dubious motivation to clear that country of as much radioactive waste as cheaply as possible before its prospective membership in the European Union (EU) takes effect — a membership that carries with it restrictions that ban sending toxic waste to countries that are not considered by EU authorities to be technologically capable of dealing with it.

The announcement of the deal is also bound to open a can of environmental worms in Russia, especially following the publication of a letter written by Russia’s nuclear regulatory body, Gosatomnadzor (GAN), to the Kremlin, which stated that Russia’s nuclear infrastructure was not capable of handling reprocessing waste from abroad. It is also likely to cause friction for Bulgaria with the EU, where it is generally held that Russia’s nuclear facilities are not even able to handle the safe storage of their own waste, to say nothing of imports from abroad.

But in recent weeks — a year after the controversial passage of legislation allowing the import of radioactive waste to Russia — Russia’s nuclear ministry, Minatom, has been mounting a vociferous campaign to attract foreign customers for the SNF storage and reprocessing plans that it says will net the government $20 billion over the next ten years.

Among the pitches Nuclear Minister Alexander Rumyantsev has made to potential clients is that Russia’s prices for accepting waste are a third to a half lower than those of its competitors, England and France. But the $620 per kilogram of SNF being paid by Bulgaria is a mark-down even on Rumyantsev’s proposed bargains of $1,000 per kilogram.

The governmental agreement on the Kozlodui shipments, signed between Ukraine, Russia and Bulgaria at the end of last week, gives Russia the right to transport SNF from the Bulgarian plant across the territory of Ukraine for 10 years, a spokesman at the Bulgarian Embassy in Moscow told Bellona Web Monday. Bulgarian government officials contacted in Sofia Monday confirmed the agreement.

According to one government official in Sofia, who asked not to be identified, the SNF exports from the plant — for which the Bulgarian government will be paying Russia $620 per kilogram to take for reprocessing — are, "in part," an effort to clear the Kozlodui plant of as much SNF as it can before the country becomes an EU member state. According to one EU official, however, it is unclear when that membership will be granted to Bulgaria.

The Bulgarian government source said the first shipment, which he estimated to be approximately 40 tonnes with a price tag of $24.8 million, is likely to leave Bulgaria for the Mayak Chemical Combine sometime before the end of the year.

"We have always returned fuel to Russia for reprocessing, but when we become an EU member state, this option may no longer be open to us because of EU concerns about the state of Russia’s reprocessing infrastructure," the official said.

"Nonetheless, we now have and have always had confidence in Russia’s ability to safely fulfil this undertaking."

The EU’s stance
Just what the EU Commission’s position on exports of fissile materials to Russia is has not been codified.

But Derek Taylor, head of the nuclear unit at the European Commission’s Directorate-General for Energy and Transport, told Bellona Web in an email interview that member states of the EU can export their waste to other countries as long as the receiving country has the legal, regulatory and technical capability to manage it safely, and has agreed to the import — a position known as EURATOM Directive 92/3. Under this directive, such imports have to be authorized by the European Commission.

To more carefully enforce these regulations, the European Commission and members of Russia’s State Duma have established, on Bellona’s initiative, a watchdog group to monitor contacts between Minatom and European nuclear power plants regarding possible import contracts to Russia.

Although the European Commission has not yet adopted any formal position on the export of spent nuclear fuel to the Russians, the line that is now generally followed, according to officials, is that Russia is not in a currently in a position to guarantee the safety and security of any such imports as its facilities are thought to be inadequate for the safe management of spent fuel generated within the country.

GAN’s recent letter to the Kremlin unequivocally endorses this line, suggesting that Bulgaria’s efforts to ship its SNF to Russia represent an inconsistency in Bulgaria’s current policies and the behaviour it intends to exhibit for the EU in the future.

When asked if the import plan represented a hypocritical stance for his state, the official said: "We prefer to view it as practical." He added however, that since the waste was slated for reprocessing, it might not constitute waste under EURATOM Directive 92/3, which regulates storage of SNF. That being the case, the spent fuel would fall under the jurisdiction of a Joint Convention on the Safety of Spent Fuel Management and Radioactive Waste. This Convention has yet to take effect, but it will contain similar standards for destination countries that apply when SNF is shipped as waste for storage.

According to GAN Deputy Chairman Alexander Dmitriev, who co-authored the letter to the Kremlin criticizing Minatom’s import plans, the Mayak Chemical Combine — which is the apparent destination for at least the first shipment of Bulgarian SNF — doesn’t meet those standards.

"But there are unfortunately a number of technical questions about how they deal with waste at Mayak, and I’ll just say that these methods can easily be criticized."

Past Bulgarian shipments problematic
Despite several calls, responsible officials at Minatom could not be reached to comment on the Bulgarian deal, but it is consistent with recent pronouncements by Rumyantsev that his ministry would be pursuing contracts with former Soviet Bloc countries, especially Bulgaria, where Russia has undisputed consent rights over spent fuel. The United States control the remaining 70 to 90 percent of the world’s SNF.

Indeed, imports from Bulgaria are nothing new and have been coming even prior to last year’s package of legislation that opened the borders for radioactive waste from any country with rights to send it. But a shipment of waste from Kozlodui’s two VVER-1000 reactors to Zheleznogorsk at the end of 2001— the first Bulgarian shipments since 1998 — resulted in scandal when it became known that the contract for the load was a sham.

In the contract, a company by the name of Energy Invest and Trade Corporation, an offshore company based in Cyprus, was listed as the payee for the shipment. As was later discovered, however, Energy Invest and Trade had ceased to exist as early as the beginning of 2001. According to government and environmental sources, President Vladimir Putin was enraged by the scam and called Minatom on the carpet over the apparent dupe. In the resulting fallout, Deputy Minister of Atomic Energy Valentin Ivanov was fired.

But that was not all. The fuel assemblies in the SNF load, according to GAN’s Dmitriev, arrived still packed with so-called absorption rods, in strict violation of GAN policies governing imports. Additionally, according to Vladimir Slivyak of the anti-nuclear group Ecodefence!, the train carrying the load only narrowly avoided a disastrous accident that would have led to it shedding its load.

The Bulgarian shipments have also been the target of fierce environmental protests in Moldova and Romania, both of which have denied Bulgaria more convenient shipping routes across their own territory.

Future of deal unclear
GAN’s Dmitriev criticized the new tri-government agreement as "unclear" and "vague," and predicted — despite Bulgaria’s assertion that the first load would come before year’s end — that "SNF import plans will all be discussed at higher levels before that happens."

"President Vladimir Putin will apparently be returning to this issue and apparently there will be more discussions about it," he said.

Dmitriev asserted that the basic foundations of the import programme have yet to be clarified and codified as law.

"At present, though Bulgaria says this SNF is for reprocessing, we never know if we are taking a shipment for reprocessing or for storage," he said, adding that any shipments to Zheleznogorsk, even if they are for prospective reprocessing, amount to storage because of the 20-year lag-time before reprocessing of Kozlodui’s VVER-1000 fuel can begin there.