From Norway with nuclear waste

With Norwegian flag painted on side, the highly controversial train with spent naval fuel will leave Murmansk this week heading for the Mayak reprocessing plant. At Mayak, all storage sites are filled to capacity.

Published on November 28, 2000 by Thomas Nilsen 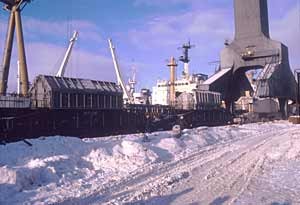 The four railway carriages were financed by the Norwegian government as a part of Norway’s assistance package aimed at tackling nuclear waste issues in Russia. But the assistance is not very welcomed among local officials and environmental groups in Chelyabinsk county. The county hosts the Mayak reprocessing plant, which will have a heavy task of finding storage place for the submarine spent fuel shipped from the Kola Peninsula.

The spent fuel will be loaded into the carriages at the nuclear powered icebreaker base, Atomflot, near Murmansk this week. The spent fuel originates from nuclear powered icebreakers. A previous train that was in Murmansk a month ago took fuel unloaded from two inactive Victor-II class nuclear submarines (K-371 and K-387), at the Polyarny naval yard. The civilian nuclear support vessel Imandra, operated by Murmansk Shipping Company, defuelled those two submarines at Polyarny shipyard in October-November 2000.

Upon arrival at the Mayak plant, the spent fuel will be likely loaded into special designed casks and placed for storage outdoors. The old storage facility for naval spent nuclear fuel at the Mayak plant is filled to capacity. The operation of the reprocessing line has been at halt since last year. That is why there are no other options than to store the newly arriving spent fuel in containers. The containers in questions are of TUK-108, a 40-ton metal-concrete cask partly financed by the Norwegian government and other Western governments.

TUK-108 casks failed to pass an independent safety evaluation. The Russian Civilian Nuclear Regulatory, the GAN, was to issue licence for those casks. But having discovered fraud under testing that could compromise safety, GAN withdrew the licence from the Izhora plant to manufacture the casks. In respond Russian Ministry for Nuclear energy, Minatom, lobbied through a governmental decree that deprived GAN of the right to licence the casks.

“Norwegian government is not only supporting a nuclear waste system totally out of civilian control, they are also paying for it,” says environmentalist Natalia Mironova from Chelyabinsk. For years, she has been protesting against the Norwegian plan to pay for shipping the nuclear waste as far away from the Norwegian boarder as possible. In 1996, she participated in hearing on the issue in the Norwegian Parliament, and in March this year she and other envirogroups sent an urgent letter to the foreign minister in Oslo, arguing against the project. The foreign minister never replied. 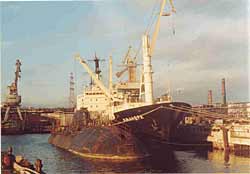 “Mayak does not have a licence to operate, and the safety related to the storage casks is highly questionable. I thought Norway intended to help Russia to increase the nuclear safety, not to undermine it like they are doing today,” says Mironova.

The environmentalists are not alone opposing the transportation of naval spent nuclear fuel from Murmansk region to the Mayak plant. Interviewed by Bellona Web last autumn, deputy governor of Chelyabinsk county, Gennady Podtyosov, said the local administration in Chelyabinsk was never asked about their standpoint on this issue.

The Chelyabinsk authorities shared the opinion with the State Committee on Environment, which concluded in a study that no additional nuclear storage should be built at the Mayak site. But the State Committee on Environment was disbanded by President Putin in May this year. The Norwegian Government has never bothered asking the local Chelyabinsk authorities whether they would accept additional nuclear waste.

The Mayak reprocessing plant has not been in operation since 1999. Next year, Russia plans to defuel 21 retired nuclear powered submarines. The fuel will be carried away from the Norwegian boarder and piled up far away in Siberia.