NEW YORK – With US presidential candidates staking most of their credibility in 2009’s presidential elections, it has been hard to pin down what foreign policy notions any of the contenders have toward continued nuclear non-proliferation efforts with Russia and the still outstanding work that needs to be done to assure nuclear security in Russia.

Published on January 2, 2008 by Charles Digges

In several interviews with the candidates conducted over several weeks by Bellona Web and in writings they have done for the Washington-based Council on Foreign Relations, the one common thread that has emerged is that the candidates themselves are not well acquainted with US-Russia bilateral legal instruments ensuring destruction and verification of nuclear stock-piles.

While America’s involvement in this process through the Cooperative Threat Reduction (CTR) programme – devised in 1992 by Senator Richard Lugar and former Senator Sam Nunn – has done much to dampen the threat of Russia becoming a nuclear Walmart for would-be terrorists, several outstanding and ongoing programmes continue to be under-funded.

Part of this lack of interest or knowledge, according to Micheal Levi of the Council on Foreign Relations – which costs the US a mere $450,000 a year on average – is largely doing its job.

"Plutonium is not falling off the shelves there," said Levi. To date, there has been no evidence of any attempts by terrorists to steal enough nuclear material to make a bomb – though that is not to discount the existence of a black market for loose nukes.

Yet each candidate seems to know that there is a sense of urgency in jumpstarting some of the programmes that have been allowed to flag under the Bush administration for fear that Russian nuclear material will fall into terrorist hands.

The concept of US funded nuclear weapons destruction, in other words, is not a sexy campaign topic unless couched in the rhetoric of the global war on terrorism.

Item one: mend fences
Candidates all seem to know that the events of the war torn Bush administration have had an impact on relations with Russia.

At the same time, top officials and candidates from both parties have stressed the importance of engaging Russia on matters of strategic importance, in particular securing Russia’s vast stocks of nuclear materials, to avoid proliferation to rogue states or other groups.

With the impression of Soviet greatness high on Russian President Vladimir Putin’s stated agenda, his administration is less and less likely to allow access to those nuclear sites for verification that the United States is itself paying to mothball. 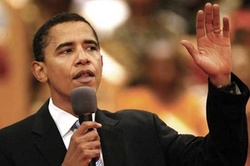 Former New York City Mayor Rudy Giuliani
Rudy Giuliani would be perhaps the next republican president to be able to claim to “have looked into Putin’s eyes and seen his soul.”

The two leaders found a common bond over the 9/11 tragedy when Giuliani gave Putin a guided tour of ground zero.

Giuliani told news media at the time that the attacks of September 11, 2001 would bring the United States and Russia closer together. Thus was born the convenient myth that the United States and Russia were fighting a common enemy in Al Qaeda – Giuliani on the smouldering streets of New York’s financial district, and Putin on the smouldering streets of Grozny – where it has never been proven that any Al Qaeda member has ever set foot.

Giuliani recommended in an October 2007 debate an increase in defense spending to “send a heck of a signal” to Russia, and also advocates the controversial missile shield in the former Eastern Bloc.

Giuliani’s primary interest in Russia is creating a solid business partner – no small feat given that trade between the two countries, except in uranium – is virtually nill. In 2004, Giuliani travelled to Moscow to promote U.S.-Russian business relations.

But the hero of the post 9/11 anti-terrorism movement and the man who helped raise the “what if” question of dirty bombs that has occupied American strategy claques and think tanks ever since, had absolutely nothing to say to questions regarding ensuring non-proliferation safety within Russia.