A British Royal Navy nuclear submarine was involved in an accident with a French nuclear submarine while on operations in the Atlantic Ocean and that both vessels were carrying atomic weapons, British and French media reports and official statements indicated Monday.

Published on February 15, 2009 by Charles Digges 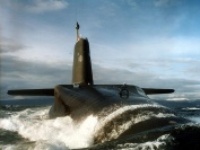 First Sea Lord Admiral Sir Jonathon Band said in a statement issued to the press Monday afternoon that the submarines came into contact at low speed while submerged and no injuries were reported.

Both vessels are understood to have been carrying nuclear warheads at the time, and both are said to have suffered damage.

Band’s statement said the two vessels, the UK’s HMS Vanguard and France’s Le Triomphant, collided on February 3 or 4 during heavy weather and that both vessels were badly damaged. But French and British authorities insist that the accident presents no radiation hazards.

But the statement was intentionally vague as all submarines activities by the British and French governments are covered by national security laws.

Both subs were returned to their home bases accompanied by other vessels, French and British officials confirmed.

“This incident reminds us all of the potential risk that is involved with the use of nuclear energy at sea,” said Bellona’s nuclear physicist Nils Bøhmer.

“We were lucky this time, but we might not be as lucky next time.”

British government officials are demanding more information about the incident, and the incident is being investigated on both sides of the English Channel.

Could have been far worse
A senior UK Naval spokesman told the UK’s Sun newspaper, a tabloid that first reported the incident, that the collision could have been more serious. The source told the paper that the potential consequences of two nuclear submarines colliding were “unthinkable.”

"It’s very unlikely there would have been a nuclear explosion. But a radioactive leak was a possibility,” said the source, as quoted by the Sun

"Worse, we could have lost the crew and warheads. That would have been a national disaster."

French fessed up first – sort of
In a statement issued earlier this month on February 6th, the French Ministry of Defense confirmed that Le Triomphant had been damaged in an underwater collision, but gave only sketchy details saying Le Triomphant "collided with an immersed object (probably a container)."

"The sonar dome, located at the front, has been damaged. This incident did not result in casualties or injuries among the crew, and did not jeopardize nuclear security at any moment," the French Defence Ministry statement said.

The vessel was able to return to its base at Ile Longue in Brittany, northwest France, accompanied by a frigate, the French statement reported.

The HMS Vanguard was towed back into its home base at Faslane in Scotland "with dents and scrapes visible on her hull," the Sun reported.

Anti-sonar devices too effective
Both the UK and French nuclear deterrent operations depend on complete secrecy and neither vessel would have been aware of their proximity to the other submarine, despite both countries’ membership in NATO, the UK’s Independent reported in a short article on the incident.

Because of secrecy policies surrounding the nuclear deterrent operation, said the paper, neither vessel would have been aware of the proximity of the other.

But the submarines should have been able to detect the presence of a nearby vessel using state-of-the-art sonar technology, said the paper.

A BBC analysis suggested that state of the art anti-sonar equipment on both submarines, however, might have worked too effectively for the vessels to have detected one another.

UK sub record by and large safe – but politicians and activists demand answers
When the nuclear submarine HMS Trafalgar ran aground during a training exercise off the coast of Scotland’s Isle of Skye in 2002, the damage was estimated at £5million ($7million).

In 2007, an explosion occurred aboard the HMS Tireless, killing two sailors and injuring another during operations of the vessel’s self-contained oxygen generator, or oxygen candle, which is a stand-by method of producing oxygen during a power outage.

Politicians have demanded more information on the latest incident.

British Parliament’s Liberal Democratic defence spokesman, Nick Harvey, has called for an immediate internal inquiry with some of the conclusions made public.

"While the British nuclear fleet has a good safety record, if there were ever to be a bang it would be a mighty big one," he told the BBC.

"Now that this incident is public knowledge, the people of Britain, France and the rest of the world need to be reassured this can never happen again and that lessons are being learned," said Harvey.

The Campaign for Nuclear Disarmament (CND)described the collision in a statement as "a nuclear nightmare of the highest order".

CND chair Kate Hudson said, "The collision of two submarines, both with nuclear reactors and nuclear weapons onboard, could have released vast amounts of radiation and scattered scores of nuclear warheads across the seabed."

The subs’ specs
The HMS Vanguard, which was launched in 1992, is one of four submarines that make up the UK’s nuclear deterrent. Its firepower includes 16 Trident II D5 missiles capable of delivering multiple warheads to targets up to a range of 4,000 nautical miles, and is powered by a uranium-fueled pressurized water reactor It carries a crew of 141, said the Royal Navy website.

Le Triomphant was launched in 1994 and carries a crew of 111, according to the GlobalSecurity.org website. It, like the HMS Vanguard , is one of four submarines that make up France’s submarine nuclear detterent. Its weapons include 16 M45 missiles capable of launching multiple nuclear warheads.