Mysterious radioactive contamination turns up in milk produced near Sellafield

Some milk coming from farms in the vicinity of the United Kingdom’s Sellafield nuclear complex in Cumbria has been radioactively contaminated by iodine-129, and local authorities report it has entered the food chain. 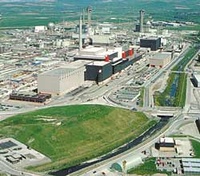 The testing was conducted by Sellafield itself, which performs such analyses on a weekly basis on farms in the area, and local citizens are unconcerned, local media report.

Yet the concentrations of iodine-129 detected have been found to be abnormal, and Sellafield teams are sampling other farms in the area to see if there are any traces of the same contamination.

The UK’s Environment Agency has issued an assurance that there has been no health risk from the radioactive iodine, but is still mystified as to how the increased iodine-129 – which is a by-product of reprocessing of nuclear fuel – got into the milk supply.

No radioactivity escaped into the environment and no one was hurt, but the resumed operations at THRORP have received the go-ahead despite the lack of government safety certificates for the facility’s evaporator, an important mechanism in the reprocessing process.

Bellona has protested the restart of the THORP plant in general, but specifically because it lacks safety documentation for its evaporator, which means the plant will drive the backed up waste through the facility until it reaches the evaporator, at which point it will be put into buffer storage until the evaporator passes its safety rating.

The UK’s Nuclear Decommissioning Authority (NDA), which is under heavy fire at the moment for cash shortages and rising prices for decommissioning 19 of Britain’s older nuclear sites – including Sellafield – relies in part on revenues from THORP’s foreign waste reprocessing. The three-year delay in restarting the facility has left unsatisfied customers in Germany and Japan.

Iodine-129 is a by-product of THORP’s reprocessing operations, but plant officials say that this iodine is dumped into the sea, leaving local farmers at a loss about the increased iodine-129 measures in milk over such a short time.

Locals unconcerned – but hint they want more assurances
Iodine 129 is said to be present already in local milk but in very low concentrations, sometimes undetectable, The Whitehaven News, a Cumbria daily, reported. The higher levels have since gone down on one particular farm that drew particular concern from Sellafield.

Sellafield Ltd said that: “Any presence of iodine-129 in milk could be down to either historic or existing discharges from the site.”

Sellafield’s spokesman Ali McKibbon went on to say that a person would have to drink 75,000 litres of the contaminated milk to receive the dose limit for members of the public. But the Environmental Agency is concerned that there is no clear source of the iodine.

“There is no obvious explanation for the increase,” the Environment Agency’s Andrew Mayall told the West Cumbria Sites Stakeholder Group, the independent health and safety watchdog for Sellafield.

“Concentrations of iodine-129 in samples of milk from a local farm have significantly increased in recent months but it is significant only i,” he told the meeting in Whitehaven.

After the meeting, chairman David Moore, himself a former Sellafield milkman, told The Whitehaven News that: “There has been no health risk whatsoever, but there was a significant increase for a short period n terms of it being an unusual trend, not in radiation doses to the public of time and it is still a matter for concern.”

“We need to know where this has come from, how it has got into the food chain. It could even have come from a cow which might have eaten a particle lying in a field,” Moore said.

Such a particle could remotely be fallout from the 1957 fire at Sellafield’s plutonium Windscale pile reactor – which is currently being dismantled. After that fire, hundreds of gallons of milk on local farms had to be poured away.

But Sellafield said that only small amounts of iodine-129 were released I that incident, and that the main concern were the emissions of iodine-131 that were released into the atmosphere from the burning plutonium reactor.

Moore, while asking there be more protective measures be put in place stopped short of criticising Sellafield, and instead praised it’s publicity of the contamination incident.

“Sellafield brought it to light themselves. Nobody is trying to hide anything and the last thing we want is people not buying local milk, but at the same time the local community needs some more reassurance,” he said, as quoted by The Whitehaven News.

Local employment versus local concern
Where Sellafield’s actions in both monitoring local agriculture and reporting their findings are to be commended, the muted response from citizens who attended the West Cumbria Sites Stakeholder Group is emblematic of the tight economic leash that Sellafield, which accounts for 50,000 jobs in the area, can attenuate public outcry.

The Environment Agency says it is still carrying out investigations that include analysing samples from another nearby farm, meaning the government body feels the threat is far from resolved. But the threshold of danger with which any group that lives near a nuclear installation lives is one of the central issues to be considered in any plans that Britain and other European country’s have for massive nuclear expansion.

Such plans, by necessity, ask local populations to exchange assurances that their health and livelihoods will not be disrupted for job possibilities.

Iodine sample gathering is ongoing, and are normally taken on Mondays in an area stretching between Sellafield and the Drigg nuclear waste facility but no further increased levels have yet been detected, The Whitehaven News said.