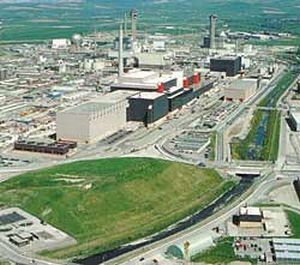 The event, classified by the seven-level International Nuclear Event Scale (INES), was rated at a 3, which the scale indicates is a serious incident but is one step short of a full-blown accident, was discovered when remotes cameras investigated Thorps fuel clarrification cell on April 18. Once the leak was discovered, the Thorp plant was immediately shut down—and may remain so for good, according to officials with the British Nuclear Decommission Authority (NDA), which as of April 1, took over ownership of 20 UK nuclear sites, among them Sellafield, that are undergoing decommissioning.

The fuel clarrification cell was inspected when plant workers noticed a drop in the level of plutonium and uranium held in one of Thorps two so-called Accountability tanks, which hold the toxic mixture and where other elements such as metallic uranium, or tailings, are separated out. The leak could have been going on since August, officials at Sellafield said.

But questions remain as to why this leakage was not discovered for nine months, and why camera inspections of the fuel clarification cell—which cannot be entered by humans—are carried out on such an infrequent basis, especially in such a volatile area of the plant. According to British Nuclear Group (BNG), formerly BNFL, officials that are managing the site for the NDA, the leakage was caused by a ruptured pipe leading from one of these Accountability tanks.

It remains unclear, said BNG officials, whether the leak resulted from a flaw in the pipe or in a suspected welding error that joined the pipe to the tank. Nonetheless, officials with BNG, NDA and UKs Nuclear Installations Inspectorate (NII) asserted again that the leak posed no danger to the population of West Cumbria, England, where Sellafield is located, or to plant workers.

What is the clarrification cell?
Efforts to remove the toxic mixture and clean out the fuel clarrification chamber began on May 19, one BNG official said. Thorps fuel clarification cell comprises a stainless steel-lined space 60 metres long, 20 metres wide and 20 metres high and its concrete walls are 2 to 3 metres thick to absorb radiation. BNG Sellafields spokesman Nigel Monckton said the cell was designed to withstand the possibility of a leak and, because stainless steel does not dissolve in nitric acid, the leak has been contained.

"There has been no radiation dose to Sellafield workers as a result of the leak and no release of radioactivity into the atmosphere," confirmed a spokesman for NII.

Thorps raw materials are the used fuel rods from nuclear power stations. After receipt at Thorp, they are stored for several months to allow the radioactivity of short-lived fission products to decay to safer levels. The 1-metre long, 1-centimetre diameter tubular rods are then cut up into small chunks and lowered in baskets into strong nitric acid.

What lead to the leak
The leak was the result of a catalogue of human and engineering errors which resulted in a pool of nuclear liquid, called liquor, half the volume of an Olympic swimming pool, being accidentally discharged, the Independent reported. The magnitude of the incident throws the future of the troubled reprocessing plant into doubt this weekend as copies of an internal investigation circulate among senior ministers and officials. If the NDA was considering shutting down Thorp for economic reasons, one NDA official told said earlier this month, then the current revelations may have sealed up its closure for environmental hazards reasons, the official told Bellona Web Monday.

Indicators ignored
BNG Saturday night admitted to the Independent that workers failed to respond to "indicators" warning a badly designed pipe had sprung a leak as long ago as last August, said the Independent. The pool of nuclear liquor, 83,000 litres, was eventually discovered on 18 April. BNG has ordered a review to check for other potential leaks caused by metal fatigue and an urgent drive against staff "complacency" said various of its representatives to Bellona Web Monday.

But UK ministers privately concede that Thorp, now owned by a the NDA, may never re-open as a result of the incident. In an official statement released yesterday the NDA said it needed time to assess the report’s findings before "discussing their implications" with the company and the Government, adding that "safety is the NDA’s absolute priority".

The nuclear clean-up agency is thought to be fighting a battle with the government of UK Prime Minister Tony Blair to close the plant for good in a move that would cost taxpayers billions of pounds, the Independent reported.

The leak comes as ministers and nuclear firms are preparing to seek public support for a new generation of nuclear power stations to help meet climate change targets. It explains why Tony Blair and Alan Johnson, the new Secretary of State for Trade, have been so reluctant to start making the nuclear case.

Criminal charges for BNG?
The company may yet face a criminal prosecution, the Independent reported. A spokesman for the Nuclear Installations Inspectorate (NII) told the paper: "I can confirm we will be seeking to find out what monitors were in place, whether they were working and, if so, why they were not acted on."

Four inspectors have been at Sellafield since the incident happened. In addition to human error, they are concentrating on why engineers failed to modify pipes leading to moveable tanks. Metal fatigue in the pipe work was the principal cause of the leak.

It is thought that the investigation will continue for a number of weeks before a decision is made on further action against BNG..

A spokeswoman for the Department of Trade and Industry said that Mr Johnson would wait until the completion of the NII probe before deciding on the plant’s future, the Independent said.

"It is essential that BNG acts urgently to implement the recommendations to improve operating practice and retrieve the escaped liquid. We are going to wait for advice before taking a decision on the way forward."