ST. PETERSBURG – The Leningrad Nuclear Power Plant’s beleaguered No 1 Chernobyl-type RBMK reactor experienced another hiccup – it second in less than a year – earlier this month when the reactor automatically shut down due to a malfunction in shut off system of the unit. 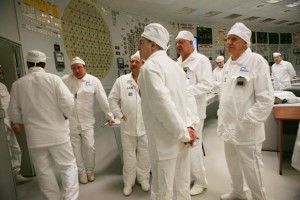 ST. PETERSBURG – The Leningrad Nuclear Power Plant’s beleaguered No 1 Chernobyl-type RBMK reactor experienced another hiccup – it second in less than a year – earlier this month when the reactor automatically shut down due to a malfunction in shut off system of the unit.

Environmentalists say the latest mishap shows the reactor – which had to shut down for long repairs in 2012 when severe malformations were found in its graphite moderation system– should immediately be taken out of service. Scientist further say the reactor has well overshot its engineered lifespan, and is simply old and worn out.

According to a vague, somewhat convoluted release (in Russian) June 11 from Rosenergoatom, Russia’s nuclear power utility, the No 1 reactor at Leningrad NPP was shut down by the automatic protection system as part of normal-mode operation.” The release further said “The shutdown occurred due to malfunctioning of elements in one of the two automatic reactor shutdown systems One of the machine halls at the Leningrad Nuclear Power Plant. (Source: laes.ru)

The Itar Tass official news agency later quoted Andrei Alberty, the Leningrad NPP’s chief press spokesman (in Russian) as saying “the situation is a normal-mode situation, which means it didn’t and will not lead to any emergency situations.”

But experts Bellona spoke to said the Rosenergoatom released is lacking in any technical information about how serious any of the effects of the shutdown are.  Rosenergoatom’s release say only that “after the defects are eliminated, the No 1 reactor will be transferred to a period of continued planned repairs until the end of august in accordance with [the plant’s] 2014 repair schedule.”

Alberty told Itar Tass that the No 1 reactor is scheduled for planed repairs and was shut down on June 13.”The previous repairs will simply became planned repairs,” he said.

The Leningrad NPP press office would not return requests from Bellona for further comment.

Other experts Bellona interviewed had difficulty commenting on the situation in the absence of more concrete information. In May 2012 the No 1 Reactor at the Leningrad NPP was stopped for planned maintenance during which it was discovered the reactor’s graphite moderator had swollen and cracked. Pictured about is one of the reactor halls at the plant. (Source: laes.ru)

“Drawing on the publicized information, it is not clear why the automatic shutdown trip was triggered,” said Alexei Schukin, an expert with the Environment and Rights Center (ERC) Bellona’s nuclear program in St. Petersburg. “In any case, the system works when an accident needs to be prevented, and not when one has already happened.”

However, when assessing whether the repairs were planned or not planned, experts voiced doubt that any of the current maintenance had been scheduled beforehand.

“Credibly judging this is impossible,” said Andrei Ozharovsky, a nuclear expert with ERC Bellona. “As far as I know, there is a planned maintenance campaign for each reactor, but it’s published nor publically available.”

Nikitin further said that, “this raises the question of why, when they were working with the moderator blocks, they didn’t also undertake the planned maintenance of all the other equipment. To say [at that time] that the deadline for these repairs had not come isn’t logical.

In May 2012, swelling and cracking of the graphite moderator – the main equipment regulating the nuclear reaction – in the No 1 reactor was discovered after the unit had been shut down for scheduled maintenance. Such cracking and swelling, said Schukin, could have led to wedging of emergency regulation rods, which Schukin said could have destroyed the entire safety system of the reactor.

Many experts at the time were certain the discoveries where the end of the reactor’s career. But the reactor went back online in November.

Nikitin said the reactor should have been repaired sooner.

He added that, “I don’t see anything positive coming of the manipulations surrounding these old reactors.”

As concerns the June 11 switch off, Ozharovsky said.

That, “reactors working past their engineered lifespans are more dangerous, more worn out, and can more frequently trip the emergency shut off.”

The Leningrad NPP operates four RMBK-1000 reactors, all of which have exceeded their engineered lifespans.

Specifically, the 30-year lifespan engineered for reactor No 1, which went into service in 1973, ran out in 2003. But Russia’s former nuclear oversight agency, Gosatomnadzor –precursor to the current and weakened Federal Service for Environmental, Technological and Nuclear Oversight  –  issued the reactor a 15-year operational extension.

“All Chernobyl-type reactors long ago should have been shut off,” said Bellona general manager and nuclear physicist Nils Bøhmer

“The Russian authorities should pay more attention to alternative methods of generation of thermal energy and electrical energy in the area,” he said.

“This is a Chernobyl-type reactor and it is impossible to bring it up to modern safety standards,” he said.

The lessons learned from repairs on the graphite moderator at reactor No 1, according to a statement for the plant, (in Russian) are expected to be applied to other Chernobyl-type RBMKs operating in Russia, of which there are a total of 11. Including the No 4 at Leningrad, the Smolensk NPP operated three, and the remaining four are running at the Kursk NPP.