ST. PETERSBURG –A sanctioned protest against the renewed construction of the Tartar Nuclear Power Plant (NPP) in Russia coinciding with the anniversary of the Chernobyl disaster ended with the demonstration’s organizer facing administrative court proceedings in another repressive vice-tightening on ecological dissent. 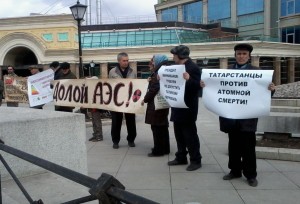 ST. PETERSBURG –A sanctioned protest against the renewed construction of the Tartar Nuclear Power Plant (NPP) in Russia coinciding with the anniversary of the Chernobyl disaster ended with the demonstration’s organizer facing administrative court proceedings in another repressive vice-tightening on ecological dissent.

Albert Garapov heads the Antinuclear Society of Tataria, in Tatarstan, an autonomous, predominantly Islamic republic, and says the court case against him is part of a new wave of intimidation against activists against the plant.

The plant itself, as established by numerous independent scientific surveys in 1990, is being built on extremely unstable and seismically active grounds along a fault line and in an area prone to sink hole activity. The abundance of unfavorable geological assessments was so overwhelming that the Tatarstan government ceased construction of the plant that same year.

But completing the plant has nonetheless found its way onto the Russian government’s official territorial energy plan through 2030 (in Russian), signed off on by Prime Minister Dmitry Medvedev in 2013. In his interviews with Bellona, Garapov says he sees larger forces at work behind derailing his demonstration.

‘The movement against the NPP is bugging someone’

On June 2, Garapov filed an appeal with the Supreme Court of Tatarstan against an earlier decision by a district court in Kazan sentencing him to 30 hours of community service, with the further demand “to cease the administrative case in light of the insignificant administrative offense,” the Russia daily Kommersant reported (in Russian).

Earlier, in May, the regional court declared Garapov guilty of violating procedures for organizing a picket against the renewed construction of the Tatar NPP. The picket convened in central Kazan, the republic’s capital, on April 26.

In a telephone interview with Bellona, Garapov confirmed he’d appealed his case and said the administrative charge was tied to his active protest of the Tatarstan NPP.

Yelena Koval, spokeswoman for the district court in Kazan told Bellona that Garapov’s complaint had on July 6 been passed to the Supreme Court, and confirmed he’s been charged with “violating procedures for holding a public gathering on the grounds of facilities of cultural significance, which was constituted by the hanging of placards and used of a drum.”

Community service for stopping the drumbeat

Garapov said a number of activists brought placards with slogans opposing the plant’s construction, and another participant periodically banged on a drum.

The Kazan mayor’s office sent a representative to the demonstration demanding that the placards come down and the drumbeats cease, and Garapov said everyone complied. Despite this, the demonstration’s participants were later charged with violating picket regulations, and an administrative protocol was filed against its organizer, Garapov.

Comments by Garapov, witnesses, and Garapov’s representative are also recorded in the court decision’s text. The court noted Garapov’s voluntary cessation of “unlawful behavior, which “mitigate the guilt of the circumstances” –but still sentenced him to an administrative sentence of 30 hours community service. Anti-nuclear protests in Tatarstan, dedicated to the anniversary of the Chernobyl disaster. Participants came out against the construction of the Tatarstan and Nizhegorodskaya nuclear power plants, two nuclear power plant projects Russia is undertaking in seismically dangerous areas. (Source: Albert Garapov)

Garapov attributes the sentence to his active civic position: His Antinuclear Society demands of the Tatarstan Republic government  “a cancellation of plans to renew construction on the nuclear plant and a re-profiling of the construction as an ecologically safe non-nuclear facility.”

“Apparently,” Garapov told Bellona, “someone is bothered by the movement against plans to renew the Tatarstan NPP, and they are tightening the screws. He said the demonstration’s participants are disturbed by the situation and consider that have been “limited in their opportunities, [and] means to conduct demonstrations, which are guaranteed by law.”

Filing charges, said Garapov, “is an attempt to pressure participants of the demonstration against the nuclear threat, against the plans to construct the Tatarstan NPP.”

The Tatarstan electronic business newspaper BusinessOnline (in Russian) reported in November that construction on the nuclear plant began in 1980, but was ceased after 10 years by decision of the Tatarstan government, which said the plant was going up on an active fault line.

The publication quoted a host of eminent geologists’ and mineralogists’ assessments of Tatarstan’s complex seismological circumstances, which is characterized by unstable sinkholes, and hence extremely dangerous for nuclear energy and even oil projects.

Kamil Mirsoyev, an associate of the Russian Academy of Sciences’ institute of land physics, and a PhD in physical and mathematical sciences, told the publication: “Sinkholes are not only a problem in Kazan but for the entire Eastern European platform – a very serious problem.” Because of this problem, said Mirsoyev, “the Tatarstan NPP was not built.”

Despite across-the-board agreement that the station just shouldn’t be built in such conditions, however, the Tatarstan NPP is included in the list of nuclear power plants that will be built or completed by 2030, according to the Medvedev energy plan. The plant will include two VVER-1200 reactors, producing 1150 mw of power each,.

The Tatarstan NPP is not the only nuclear plant in the government energy plan slated for construction on extremely unstable geological circumstances. The Nizhegorodskaya NPP, too, is slated for construction in a minefield of sinkholes – and protesters in the April demonstration brought signs reflecting their frustration with that project as well.

Garapov says plans to construct a nuclear power plant in seismically active conditions 30 to 50 kilometers from a huge population center are “lunacy.”

“Even during the most insignificant mishap catastrophic consequences are possible,” he said. “And it’s clear who needs this project – they want to live off the reconstruction of second hand goods.”

But Garapov says there are alternatives to nuclear energy in Tatarstan, namely renewables.

“Even back in the 80s, scientists showed Tatarstan has huge wind energy resources of some 34 million kilowatt hours – 27 times more than the capacity of the Nizhekameskaya Hydro-Electric Plant,” he told Bellona.

But Tatarstan’s cabinet of ministers hasn’t much been looking into any energy alternatives aside from renewing construction of the nuclear plant. According to an official inquiry sent to the Russian Ministry of Energy by the MK-Povolzhe newspaper (in Russian), the NPP construction is not only confirmed by the 2013 federal energy plan, singed November that year. It was also agreed to by Tatarstan’s cabinet of ministers seven months previous, in May.