Vis menyen
Bellona.org > Latest News > Nuclear issues > Nuclear Meltdown in Japan > COMMENT: A chronicle of nuclear decay: Over half a year later, what have we learnt from Fukushima?

COMMENT: A chronicle of nuclear decay: Over half a year later, what have we learnt from Fukushima?

MOSCOW – Eight months since the fateful March of 2011, one of the world’s worst nuclear catastrophes that enflamed Japan’s Fukushima Daiichi Nuclear Power Plant has ceased to be the stuff of front-page frenzy. We will likely still see radioactive goods and food products popping up on the store shelves around the world, reminding us of the terrors of nuclear energy, but for many, the panic caused by the threat of contamination spreading silently in a far-off country has become yesterday’s news. But does it mean that the problems of Fukushima – and, indeed, of the global nuclear power industry – are soon to be over? Not by a long shot.

Published on November 22, 2011 by Vladimir Slivyak, translated by Maria Kaminskaya 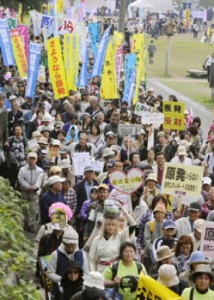 Clearly, even a cursory look at the latest developments will tell us it will be a very long time before the tragedy in Japan is safely forgotten.

In mid-November, a series of large-scale rallies took place in Fukuoka Prefecture, in the south of Japan, which is now home to some of the evacuees from Fukushima. Some 15,000 people took to the streets, demanding the closure of all Japanese nuclear power plants.

And the week before that, representatives of international media outlets were invited on a tour of the stricken plant: The Japanese authorities were, apparently, hoping to demonstrate that – having come, at the height of the disaster, under a barrage of criticism for being less than one hundred percent open about the developing crisis – they could now be counted on for complete transparency in how they related with the rest of the world.

The level of radiation that the Japanese and foreign journalists were able to register while on the visit to the site was 1,000 microsieverts near the plant – a reading that exceeds normal values by 5,000 times. A story (in Russian) carried by the Russian publication Komsomolskaya Pravda, citing the news agency ITAR-TASS, said this level was what Geiger counters showed as the reporters were approaching the station from a nearby forest. Closer to the entrance to the site, the measurements came down to 300 microsieverts – still, though, much higher than the norm, which is 0.2 microsieverts, the story said.

The journalists were taken on a tour of the station dressed in protective clothing they had been supplied in advance – hooded coveralls and full-face respirator masks, media reports said. It seems unlikely, though, that such precautions could have been sufficient to shield the journalists completely from exposure.

As laudable as this effort at transparency may be, we didn’t need this tour to know that things were far from perfect at the embattled plant. A few days prior, world media reports told us there were indications that a chain reaction may be in progress at the No. 2 reactor at Fukushima, spelling a risk of new massive releases of radiation. Xenon may have been detected in air samples taken near the reactor – a sign of possible nuclear fission taking place in the reactor.

At around three a.m. on November 2, technicians began to spray boric acid on the unruly unit in order to stop a chain reaction from developing, according to Junichi Matsumoto, a general manager at the operator company, Tokyo Electric Power Co. (TEPCO). He was quoted by media outlets as saying that given the signs, it was “certain that fission [was] occurring.”

No significant changes in temperatures and pressures of the reactor and radiation levels at the site have been detected, Hiroyuki Usami, a spokesman for TEPCO, was quoted by Bloomberg as saying. So, it looks like we were spared another crisis – this time, anyway.

At the same time, new cases of radioactive contamination keep showing up in Japan. The latest was discovered on October 29, in Tokyo. Was this a trace of the spring fallout – or a cloud emitted with a later release that went undetected? Or may there have been new discharges of radiation that the authorities, again, thought best to keep the public both at home and abroad from knowing about?

Last spring, the Japanese authorities showed a clear bent toward being reticent with important information just at the time that it could have major significance for the neighbouring countries and their governments’ ability to make timely decisions about possible mitigation measures. Come late October, suspicions were again raised over whether Tokyo was being completely trustworthy with the information it was willing to disclose. According to latest studies, Nature magazine writes in this report, published on the website of Scientific American, the total amount of radioactivity dispersed as a result of the disaster at Fukushima may be much larger in scope than the official assessments would like us to believe.

In particular, scientists believe the accident resulted in the atmospheric release of over 35,000 terabecquerels’ worth of caesium-137 – or some 42 percent of what was released during the 1986 catastrophe at Chernobyl. Caesium-137 is a radioactive isotope that has a half-life decay period of around 30 years and is capable of causing gene damage after prolonged exposure.

This finding challenges official figures, which, presented in the latest report from the Japanese government, published in June, stand at about 15,000 terabecquerels, Nature’s story said.

Also contrary to government claims, researchers believe that a great amount of caesium-137 was discharged from the spent nuclear fuel storage ponds, which were in significant distress during the crisis as the cooling systems failed to supply water to the ponds, leading to heat accumulation and exposure of the fuel rods.

Of the total amount of caesium-137 spewed out by the crippled plant last spring, only 20 percent fell out on the Japanese territory, with the remaining 80 percent dispersed elsewhere and most ending up in the ocean.

The results of the study, led by Andreas Stohl from the Norwegian Institute for Air Research, were published for open peer review on the website of the scientific journal Atmospheric Chemistry and Physics.

The analysis – which Stohl believes is the most comprehensive effort yet to understand how much radiation was released from Fukushima Daiichi – relies on data from dozens of radiation monitoring stations in Japan and around the world, Nature writes. Many are part of a global network to watch for tests of nuclear weapons that is run by the Comprehensive Nuclear-Test-Ban Treaty Organization in Vienna. The scientists also added data from independent stations in Canada, Japan and Europe, and then combined those with global meteorological data, the story reported by Nature said.

There is one more important detail that the researchers have noted: According to their report, radiation may have started escaping the facility even before the enormous wave hit the shore some 45 minutes after the 9-magnitude earthquake, Bloomberg reported in its story on the latest findings.

This also stands in contrast to the information earlier made available by the Japanese nuclear industry and government officials. Bloomberg cites a spokesman with Japan’s Nuclear and Industrial Safety Agency as saying the authority remains convinced the quake didn’t cause significant damage to the plant.

Some of the nuclear industry insiders in Russia have also been eager to point out that nuclear reactors are in any case reliable enough to withstand the shock of a strong earthquake – something that was repeatedly used as an argument in favour of nuclear energy after the crisis at Fukushima, where the dual force of the earthquake and the following tsunami wave disabled the plant’s external power supply, stopping the cooling systems and preventing water delivery to the reactors and spent nuclear fuel ponds. It was then widely held that this was the main cause of the ensuing disaster.

“By the way, at Fukushima [Daiichi], the plant, too, remained functional after the earthquake, to the nuclear power industry’s credit. The tsunami, though, did do its evil deed, knocking out the diesel generators,” Leonid Bolshov, head of the Nuclear Safety Institute (IBRAE) of the Russian Academy of Sciences, said in one of his interviews (in Russian) late last April.

In other words, IBRAE once again demonstrated gigantic scientific – or is it PR? – potential, generous enough to think of giving credit to the nuclear energy industry for what it has done at Fukushima and in the neighbouring territories, now off-limits for decades.

This past October, other information also surfaced, bringing new clarity into how much radiation eventually ended up in the Pacific Ocean. A study by the French Institute for Radiological Protection and Nuclear Safety said 27,000 terabecquerels of caesium-137 had drifted out to sea in the first three months since the onset of the disaster. This was 20 times the estimate given by TEPCO, another report by Bloomberg said.

Clearly, this was the largest case of radioactive contamination of the planet’s ocean in all of humankind’s history.

Soon after the disaster erupted, experts around the world started voicing criticism at the Japanese authorities, saying Tokyo was withholding information on the amounts of radiation that were being discharged into the environment by the damaged plant. In Russia, this show of the Japanese government’s ill-timed reserve brought back memories of 1986 and the thick blanket of secrecy that the Soviet leaders were trying to throw over the Chernobyl tragedy as they wasted precious time lingering with first-response measures.

The Japanese government later apologised for holding important information back from their neighbours that came under direct threat of contamination. It could, though, have treated its own population better by agreeing sooner to expand the evacuation zone around Fukushima. Because it didn’t for so long, children and pregnant women who remained in the areas affected by the radioactive fallout were subjected to increased exposure.

Eight months have now passed since the disaster at Fukushima Daiichi started. It won’t be before the end of the year that TEPCO promises to bring the plant to a safe state. Has the Japanese government used this time wisely and tried to change its ways? It doesn’t look like it. The tour it arranged for reporters – who know well enough what is really going on at the struggling plant – hardly changes anything. We still see reluctance to acknowledge facts that the authorities would rather didn’t come to the surface, wilful silence as a reaction to troubling scientific data, and more attempts to paint the dire situation in the best light possible. Thousands of ordinary Japanese citizens may have marched out against nuclear energy exactly because they know all too well what their government’s promise to close all seventeen Japanese nuclear power plants is worth. It’s not worth much.

By contrast to the Russians, or the Soviets of 1986, however, the Japanese are ready and willing to take to the streets and have their demands heard by the powers that be. Whatever official Tokyo’s political agenda of the day, the earlier promise it made to phase out nuclear energy may have a real chance at success – just like it happened in Germany, Italy, Switzerland, Belgium, and other nations whose governments were forced to yield to their voters’ pressure and pledge to shut down their nuclear power plants. One day, Russia, too, may find its place in their number.

Today, this still sounds like a line from a sci-fi novel: Defiant of the exorbitant costs of nuclear construction, the many risks and losses exemplified by Fukushima, a host of troubles plaguing reactor safety, and a myriad other unsolved problems, the Russian nuclear power industry presses on with new projects, aided as it is by full backing of the unquestioning government. But back in 1986, no one could have thought that the Soviet nuclear construction programme would come under an almost total freeze, one it has had trouble recovering from ever since – and yet it did.

Vladimir Slivyak, co-chair of Ecodefence, is a frequent contributor to Bellona.