In a wide-ranging interview following the IAEAs Contact Expert Group, or CEG, meeting in Moscow, deputy Rosatom chief Sergei Antipov advocated for a guiding structure among nations donating funding to Russias nuclear clean up, but rejected the notion of an international coordinating structure to oversee nuclear remediation efforts.

Published on November 4, 2004 by Charles Digges 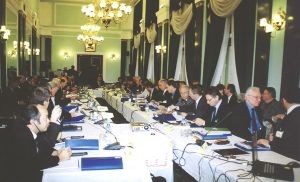 The distinction Antipov drew was at once subtle and stark. He praised the new, more professional structure of the CEG—which gathered in Moscow on October 13th to 15th—and its embracing of several new foreign institutions to help fund solutions to Russias nuclear woes. He also made it clear that Russia would no longer view itself as a charity case for non-proliferation efforts, but rather a partner—if not the true policy maker—in issues regarding Russias nuclear dismantlement.


The institutions gathered by the CEG included representatives of the G-8s Global Partnership—which has pledged $20 billion in nuclear dismantlement aid to Russia over the next 20 years—and the signatories of the Multi-lateral Nuclear Environmental Partnership in the Russia Federation, or MNEPR, accord.

–>
At the same time, however, Antipov strongly advocated that the Rosatom agency have the final word on what nuclear remediation projects were the priority items, and, ultimately, how and where funding should be spent. Bellona has advocated in the opposite direction, and considers that an independent international oversight agency should be established to oversee Russias nuclear clean up and funding priorities.


[i]t is precisely the CEG that has more favorable chances of becoming such a chief professional organization. Chief not in the sense of making decisions but as an expert organ for giving the most professional recommendations, the most deeply studied practical issues of integrated submarine dismantlement.

But Antipovwho was appointed to his deputys post at Rosatom from his former position heading up its department of nuclear decommissioning last weekwas, like the deputies who presided at the Ministry of Atomic Energy, or Minatom, strongly against ceding Rosatoms prerogatives on deciding funding priorities to an international coordinating structure.


Why build another unneeded structure on top of an already existing one, he said. We always say that such an organ is Russia in the face of Rosatom. We define and order what Russia needs to do first in integrated submarine dismantlement, and we decide in what order this need to be done, he said. During the CEG meetings, said Antipov, the Russia delegation was strict in announcing to a number of participating donor nations that they were not only not helping, but holding back progress, even though these nations were likely unaware of this. He did not elaborate as about which nations this applied to, nor would other Rosatom staff comment on this.


Under no circumstances should aid turn into a burden or hinder us [] and we intend to insist on our position henceforth, Antipov said.


Antipov said it was equally important that Russia be furnished with audits of pledged and spent funding from donor nations.


European and American officials were divided in their comments on Antipovs approach. On the one hand, this sort of aggressive engagements from the Russia side is what we have wanted for some time, said one EU official who requested he not be further identified, But this cannot eliminate the prerogatives of MNEPR signatories to set their own agendas and influence Russias.


Another official close to the US Department of Defences Cooperative Threat Reduction programme noted we are not just helping the Russians to help Russia but to help the world. This means that under no circumstances will they unilaterally be deciding where non-proliferation and nuclear clean up funding will be spent.


The American official added that its not just a matter of calling up the West with a grocery list and saying buy this stuff. Projects must be negotiated and designed in a multi-lateral way. 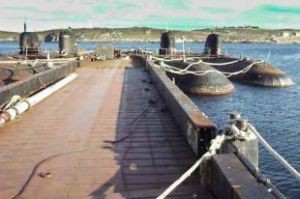 Nonetheless, Viktor Akhunov, deputy director of Rosatoms Department of Decommissioning Nuclear and Radioactively Dangerous Facilities, rattled a sub dismantlement figure of 18—five of which were funded by foreign donors— for 2004 while speaking at the CEG conference.


He added that by the beginning of 2005, 83 more of Russias 195 decommissioned submarines would head for dismantlement—41 from Russias northern fleet and 42 from its Pacific Fleet. Of these submarines, 52 still have their spent nuclear fuel aboard. Akhunov noted that contracts to dismantle 17 of these had already been signed but did not say with whom. The Russian government has decreed that al 93 of these submarines will be dismantled by 2010.


According to Akhunovs calculations, which he presented at the CEG, Russia will have to dismantle some 15 to 18 submarines a year, but that the country is only capable of dismantling 13 per year—two short of the minimum to fulfil the government mandated quota. . He projected therefore that at least five submarines per year would have to be tackled by international donations and contracts, thus upping the dismantlement tempo to 20 submarines a year.


He also noted that appropriate storage facilities for the spent nuclear fuel from these submarines would have to be constructed.


In conclusion, we need money,” he said. Preferably the sooner the better so that we can begin to set priorities in work and get down to business.

In his interview, Antipov noted that he was keenly aware of those nations represented at the CEG meeting that paid Russia its rhetorical dues when addressing the assembled representatives.


It is gratifying that almost every participant in the meeting underscored in their presentations that it cannot be forgotten that we are, before all else, working on the territory of Russia, specifically for the interests of Russia and therefore the last word [] on issues of prioritising programmes must be Russias, more particularly, Rosatoms, he said.


This understanding, though it was not immediately grasped by some people participating in the CEGs work, pleases us. Again, Antipov did not elaborate on which CEG representatives were opposed to the notion that Rosatom be the sole arbiter of its nuclear remediation priorities.

Beginning with the signing of the MNEPR accord in May, 2003, a cash crop of money has been pledged by donor nations from the G-8 and Europe. Many countries, like Norway, the United Kingdom, and Japan immediately engaged in non-strategic submarine dismantling projects. These submarines, however, were in relatively good shape when dismantlement work began, bringing encouraging headlines, but ignoring the vast number of submarines in worse shape that remain in need of immediate attention.


Other countries signed their own bilateral agreements with Russia under MNEPR guidelines, and still others donated funding to the Northern Dimensions Environmental Partnership, or NDEP, an EBRD-held fund for environmental and nuclear clean up in Northwest Russia. Donors to NDEPs nuclear window—as those funds reserved for nuclear clean up are called—also have their own nuclear priorities for Russia that they wish to pursue without having Rosatom as a middleman.


Additionally, Minatom often mishandled or misdirected funding that came from foreign nations, and several million dollars have been diverted from their intended projects, giving pause to many donors about trusting Rosatom, whose directorship has not substantially changed since a government reshuffle abolished Minatom and replaced it with the new agency. How far foreign donors are willing to go based on Rosatoms word—and how far Rosatom is willing to go to back up its words with actions, are, as yet, unknown.

In December 2003, what was then Minatom adopted a so-called master plan for dismantling submarines, which provided for a surprising breadth of items on the Wests wish list. These items included tighter scrutiny of foreign funded nuclear dismantlement projects before they begin, mandates for higher levels of transparency, accountability and access for donor nations while the projects are underway, and complete and transparent audits upon completion.


At the time the plan was first being drafted, Antipov—then still a deputy minister at Minatom—said the plan must encompass a complete picture of all ecological problems and planned work, the consistency of their proposed solutions, and an assessment of cooperation between separate projects and contracts of donor nations. He also said, as he did at Octobers CEG meeting, that Russias main nuclear industry institution should be the liaison for cooperation.


Considering that Russia is the defining link in the nuclear window projects, meaning that Russia decides which particular projects should be the first to receive funding of course, this should be done by a representative of Minatom, said Antipov in an interview in January.


The plan was well received by western donor countries and European parliamentarians, many of whom had gathered at the Inter-parliamentary Working Group, or IPGW, hearing in Brussels in 2003, and which was dedicated to the improvement of risk assessment and funding coordination for nuclear dismantling in Russia.


Getting master plans off the ground

At the CEG gathering, however, Antipov noted that the legal base for many signatories of the MNEPR agreement had not yet ratified the accord via their national parliaments, making it impossible for Rosatom to conclude bilateral agreements with many countries anxious to begin making donations.


This, he said, has forced Rosatom into the awkward position of searching out alternative agreements such as inter-ministry accords. For instance Australia, which joined the Global Partnership group of donors only this year, for instance, sent a $7 million contribution toward submarine dismantlement via Japan, which is a long-standing Global Partnership donor.


Another problem with many donor nations, Antipov noted, was that many of them have yet to inform Rosatom what projects they plan to work on in the short and long term and what sort of financial investment they are willing to make. This, said Antipov, makes long term planning for submarine dismantlement and other things impossible and complicates planning.


As a final note, Antipov emphasised that all activities of an organizational, informational or financial character by donor countries must take place on a clearly defined legal field.


Without contracts stipulating these items, he stated strongly, it will be impossible for Rosatom to furnish sensitive information about submarines and other nuclear facilities to donor states.


Unfortunately, there are attempts to obtain such information without the necessary foundation, he said, without elaborating, but echoing a familiar ring of secrecy from the quarters of Russias nuclear industry.