Moscows top nuclear official Tuesday had little comment about the imminent possibility of building a multi-national nuclear waste repository in Russia after he held meetings with President Vladimir Putin and Mohamed ElBaradei, director general of the International Atomic Energy Agency, but all domestic and international signals indicate the project is in the offing. 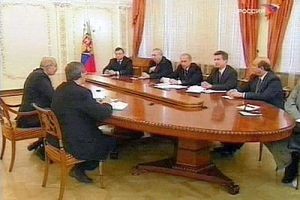 After what was reportedly a rushed press conference following their meeting with Putin in Moscow, Alexander Rumyantsev, head of the Russian Federal Agency for Atomic Energy, and ElBaradei, were pressed by reporters to give some indication of whether Russia was slated to become a burial site for thousands of tonnes of spent nuclear fuel from around the world.

Rumyantsev, swarmed by reporters after the press conference, said only that there are no minuses to building such a repository in Russia, adding just as in France, Britain, and Germany and others that manage irradiated fuel and have the legislative basis—Russia has such a basis, he said as quoted reported by Russias largely independent Nezavisimaya Gazeta.

Rumyantsev would not answer questions about how much it would cost to build such a facility or how much Russias budget stood to gain from hosting international spent nuclear fuel—though the Ministry of Atomic Energy, or Minatom, the FAEAs precursor, has in the past estimated that Russia could make $20 billion over ten years for offering such a service.

Indeed, Moscow likely stands to make even more than that. According to the most recent IAEA statistics available, a half century windfall of nuclear waste awaits Russia if the repository is built. As of 2002, 441 nuclear reactors were functioning world wide. Some 200,000 tonnes of spent nuclear fuel have been unloaded since nuclear power came into widespread usea figure that grows annually by 10,000 to 12,000 tonnes intenationally.

Rumyantsev was surprisingly reticent to discuss the plans for the repository, especially in light of several high profile announcements over the past week that a deep geologic storage site for spent nuclear fuel will be built in Russia, as it is the only country in the world that has legislation allowing for the import of radioactive waste without requiring that the imported fuel be repatriated to the country of origin after reprocessing.

On Monday, ElBaradei said the IAEA will press ahead with plans to build the world’s first global atomic waste repository in Russia to keep the dangerous material away from extremists. "It’s a very good thing for us. I’d like to push that as much as I can," ElBaradei told reporters on Monday after talks with Russian Foreign Minister Sergei Lavrov in Moscow. 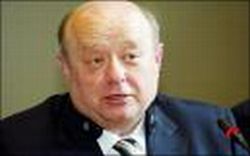 There is not a single government in the world that accepts imports of nuclear waste for burial, he said in his televised remarks.

There are only two countries, England and France, that import spent nuclear fuel for reprocessing, but their legislation contains strict prohibitions on the burial of waste that comes as a result of reprocessing, and contains strict demands that the all waste is sent back with the reprocessed product.

The legislation
The Russian Duma in 2001 passed a raft of three controversial laws, altering then current legislation, to allow spent nuclear imports. Though some 90 percent of the Russian population was opposed to the import plan, it was nonetheless rifled through the Duma by former Atomic Energy Minister Yevgeny Adamov, who, many Duma members later admitted, had bought their votes.

At the time, the legislation was geared toward attracting foreign spent nuclear fuel to Russia for temporary storage, reprocessing, and return of the processed fuel to the country of origin. But over the past three years, the plan has essentially eroded into long term storage for technical and political reasons. Technically, Russias poor reprocessing capabilities allow it to reprocess fuel only from Soviet-built VVER-440 reactors at the Mayak Chemical Combines RT-1 facility. The remaining fuel, from VVER-1000 reactors, will eventually be reprocesses, the FAEA says, in 30 years, when cash will be available to build reprocessing facilities at the central Siberian Zheleznogorsk RT-2 facility.

Politically, the promised financial boon from imports of foreign spent nuclear fuel have been hindered by the fact that the United States controls some 70 to 90 percent of the worlds spent nuclear fuel, and has, until recently, steadfastly refused to allow any of that fuel to trickle into Russia while Moscow continues to build civilian reactors in Iran. As a result, Russia has had few customers, all of them financially desperate countries of the former Soviet bloc who can afford only cut rate storage prices.

The US stance, however, has begun to change. First, in early 2003, the US offered to loosen restrictions on the spent fuel it controls to dissuade Russia from continuing work its nuclear work with Iran, Then, during a conference in Washington, DC held by the Carnegie Endowment for International Peace last week, building a multi-nation repository for spent nuclear fuel in Russia was broadly supported during panel discussions that included US State Department brass, the IAEA, and think tanks that are working on design schematics for a repository, like the Scowcroft Group.

According to the Scowcroft Groups Daniel Poneman, who took part the Carnegie Conference, said last Tuesday that it was time to look beyond these political differences and start a serious project for a multi-national repository in Russia as soon as possible.

Russia maybe the one country in the world which at present is the least suited to host an international repository, he said.

First, Russias handling of its own waste and spent nuclear fuel speaks for itself. Second, Russia has not developed the necessary democratic system and controll mechanisms that are nececcary to form the basis for an internationally accepted repository. Russia also lacks the transparency in order to assure that the money paid for the fuel is ends up in the right places.

Where will the waste go?
At present, most bets are that the repository would be located somewhere near Zhelenogorsk. In a recent interview with Bellona Web, Alexander Agapov, director for the FAEAs department of safety, ecology and emergency situations said.

Currently, the most suitable place for a repository is an area in the Kranoyarsk region, he said, because of its proximity to the Krasnoyarsk Mountain Chemical Combine, or MCC—located in the closed city of Zheleznorgorsk. The MCC is an enormous underground former weapons facility that many in favor of the repository say already has most of the crucial infrastructure in place.

The MCC is a unique enterprise with enormous experience. We dont expect any bumps as it is assumed we will be using contemporary equipment, Agapov said.

I hope that work can begin the Krasnoyask region in the next few years—realizing this project will allow for reliable isolation of waste for a million years.

But a source familiar with the project said it could take years before officials get down to actual construction. "The project is still pretty much in the making. It will take years, more than five years, before it’s done," the source said.

Spent nuclear fuel is generally stored in water pools for up to four decades for its radioactivity and heat production to decline. After that, most countries plan to seal it in containers and bury it underground.

The readiness of theRussian Government and the management of the IAEA to sell the territory of Russia as a nuclear repository is not surprising, said Vladimir Chuprov, the coordinator of Greenpeace-Moscows energy division on the Echo-TV web site. What seriously troubles us is that the realization of these plans in Russia—where there are no state ecological structures left—could actually happen.