Japanese researchers have discovered high levels of radioactive material in concentrated areas in Tokyo and Yokohama, more than 241 kilometers away from the Fukushima Daiichi nuclear plant, as increasingly thorough tests provide a clearer picture of just how far contamination has spread and accumulated after the March disaster.

Published on October 13, 2011 by Charles Digges 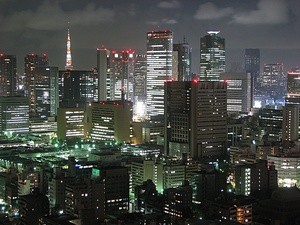 Districts in Tokyo and Yokohama are running more tests after discovering the rise in radiation readings, international press outlets have reported.

Tokyo’s Setagaya ward in the western part of the capital plans to run tests in 258 locations after a local resident alerted authorities to a “high” radiation reading that required partially blocking off a sidewalk to the public.

Setagaya ward, which has a population of more than 840,000 people, plans to decontaminate the sidewalk in the Tsurumaki 5- chome area after radiation of 2.7 microsieverts per hour was detected, according to a statement by the ward released to the media.

The 2.7 microsieverts an hour equates to a dose of 14.2 millisieverts per year, or more than 14 times the internationally recommended level for the general public, according to a Science Ministry formula.

That reading is higher than several areas within the 20-kilometer exclusion zone around the crippled Fukushima nuclear plant that was evacuated by the government, according to Japan’s Science Ministry data.

“These readings are high and surprising,” Hideyuki Ban, co-director of the Citizens’ Nuclear Information Center, told the Bloomberg news agency. “It shows government surveys can miss small hot spots and surveys by citizens’ are needed to find them.”

Ken Hataka, who is in charge of radiation monitoring in the Setagaya ward said the measurements were “puzzling because levels detected on other parts of the same sidewalk were very low.”

The ward is consulting experts to figure out what to do with the highly contaminated spot, Hatanaka added, noting rainwater and sediments containing radioactive fallout may have been more likely to accumulate in such spots.

Surveys of the same site on Thursday found radiation levels as high as 3.35 microsieverts per hour, Kyodo News reported.

Other areas in Tokyo and Yokohama have reported radiation readings requiring further investigation, with most originating from local residents using personal dosimeters.

Setagaya adjoins Ota ward where radiation levels exceeding the ward’s own safety standard of 0.25 microsieverts per hour were detected at 13 schools, the Ota ward board of education said today. The tests are continuing at the schools.

Officials said the discoveries didn’t indicate any immediate danger for residents of Japan’s largest cities. Overall levels of radiation in those areas remain very low, even near the sites where the new contamination was found.

In Yokohama, the local government said last month that it detected 40,200 becquerels of radioactive cesium per kilogram of sediments collected from one part of a roadside ditch.

By comparison, the Japanese government has banned cultivation of rice in fields found to have more than 5,000 becquerels of cesium per kilogram of soil.

Yokohama is investigating another spot on an apartment rooftop where tests conducted by a local private research institute detected more than 60,000 becquerels of radioactive cesium per a kilogram of sediments.

Both Setagaya Ward and Yokohama discovered the concentrated spots after residents carrying their radiation measuring devices noticed such spots and reported it to local officials. Although the cesium levels at those specific tiny spots appear high, airborne radiation levels near the spots aren’t particularly high, said the officials as quoted by the Wall Street Journal.

Radioactive contamination spreads unevenly depending on wind, weather and topography, and “radioactive elements later accumulate in specific spots that tend to gather dust and rain water, such as ditches,” Akira Hanawa, the head of the Isotope Research Institute in Yokohama, which conducted the tests on the sediments collected from the rooftop, told the paper.