Tokyo Electric Power Co (TEPCO) continues to struggle with cleaning up the more than 120,000 tons of radioactive water flooding the Fukushima Daiichi nuclear power plant, and the utility has hardly been able to reduce the overall amount of the water in the past several weeks.

Published on August 5, 2011 by Charles Digges 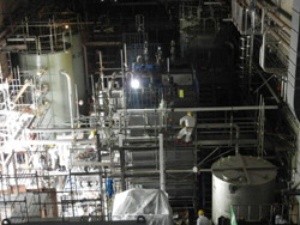 The announcements about the troubled water purification system wind up a week in which Japanese nuclear authorities announced they had disovered the highest radiation levels since the crisis began in a ventillation system and said that more rescue workers would be exposed to maximum levels of radiation as the crisis grinds on.

Meanwhile, the Japanese Ministry of Agriculture, Forestry and Fisheries announced on Tuesday standards for cesium tests on this year’s rice crop in 14 eastern prefectures that together produced 3.5 million metric tons of rice last year, about 40 percent of the country’s total yield of 8.48 million metric tons, the Mainichi Daily News Reported.

Farmers are jittery that the tests will delay the rice harvest, and also bring unbearable costs in lost crops.

Japan has also sacked three men in charge of nuclear power safety and policy over the ongoing crisis at Fukushima Daiichi, representing the first punishment meted out by the government to the nuclear industry.

Those fired by Japan’s Trade and Industry Minister, Banri Kaieda, are the head of the nuclear safety agency, Nobuaki Terasaka, the head of the agency for natural resources and energy, Tetsuhiro Hosono, and the vice-minister for economy, trade and industry, Kazuo Matsunaga, the BBC reported.

Kaieda, who played a key role in handling the Fukushima crisis, has also said he plans to resign to take responsibility, said the BBC. He gave no time frame for his resignation.

The flooding at Fukushima Daiichi was inevitable as the March 11 earthquake and tsunami knocked out both primary and back up systems powering the plant’s cooling units. That necessitated using hundreds of thousands of tons of seawater delivered by water cannons and helicopters to lower out of control reactor temperatures.

Difficulties with reducing the amount of contaminated water stem from the persistent instability in a system that went into full operation on July 2 to purify highly radioactive water and use it to cool down the plant’s reactor cores, reported the Japan Times.

As a result, the amount of radioactive water in the reactor buildings and other areas of the plant, is actually increasing.

The water purification and recycling system must be stabilized to bring the crippled power plant under control if the evacuation orders issued in areas around the plant are to be lifted anytime soon.

“The number of technical problems has decreased, but we still can’t say operations have been stabilized,” Junichi Matsumoto, deputy head of TEPCO’s nuclear power division, told a news conference on Wednesday, as quoted by the Mainichi Daily News.

To stop the water from rising and to prevent it from contaminating the environment, TEPCO has been cleaning the water and sending it back to the reactors since July 2 in a setup called a circulation cooling system.

Yet because of the constant cleaning work and other troubles with the Japanese-French-U.S. system, particularly leaks, its effectiveness has been rather low.

The purification rate of the system was about 74 percent over the week ending Tuesday because there were no major problems.

That figure is well above the 58 percent of the previous week and the 54 percent of the week before that. But the overall purification rate over the past month stands at about 65 percent, far below the initial goal of 90 percent.

Because of the haste in which the purification system was built, it has been plagued by technical problems, including a leak of a chemical solution to remove radioactive substances from contaminated water on July 10, an automatic shutdown as a result of a power failure on July 21, and a pumping system stop on July 24, said the Mainichi Daily News..

The system’s capacity to treat contaminated water has wavered as sludge sticks to the inner walls of its some four kilometers of pipes, said the Japan Times. A 100 meter long pipe was thought to be clogged. On Thursday, TEPCO spokesman Matsumoto said TEPCO installed a polyvinyl chloride bypass hose Thursday.

But Matsumoto said he wasn’t going to make any rosy predictions.

“We don’t know if the sludge will stick easily to a polyvinyl chloride hose or not,” he told the Japan Times.

Another backup in the pipeline is a new water treatment system jointly developed by Toshiba Corp., IHI Corp. and the U.S.-based Shaw Group that is expected to come online next week.

With system efficiency low, the amount of radioactive water at the plant has in fact been increasing gradually. As of last Monday, contaminated water accumulating in buildings housing reactor Nos 1 and 4 and their turbines totaled 120,770 cubic meters – 96,920 tons in reactor buildings Nos 1 through 4 and 23,850 tons in storage – which is 120 cubic meters more than last week.

TEPCO’s Matsumoto said that the company attributes the rise in water to heavy rain on July 19 and 20 brought by a typhoon, and the use of fresh water from a nearby dam when the purification system stopped, the Japan Times quoted him as saying.

TEPCO expects it will finish treating all contaminated water at the facility in early December if efficiency is kept at more than 70 percent, and complete the work in late November if it achieves the target rate of 90 percent, said the Mainichi Daily News.

If the water purification system is stabilized, TEPCO expects to finish treating radioactive water by the end of the year. But if the purification rate declines to below 50 percent, purification efforts will not be completed until 2012.