Low water levels in the building housing reactor No 1 at the devastated Fukushima Daiichi nuclear power plant in Japan may have exposed fuel rods and caused them to melt, the owner of the facility said Thursday. 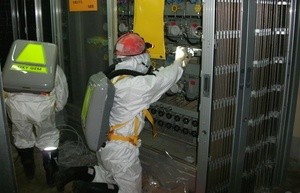 Tokyo Electric Power Co (TEPCO) confirmed Thursday that much of the fuel in the plant’s reactor No 1 –the most battered of the six reactors at the nuclear power station – had melted, and that this could lead to higher emissions of radiation. The company also reported that reactors were again leaking radioactive water into the ocean.

Bellona’s nuclear physicist Nils Bøhmer said this would not be the last bad news coming from the plant.

“It is still an accident in progress and situations like these will continue to occur for the next several months,” he said.

“This is very serious news and shows that the situation is still unstable over two months after the [March 11] tsunami,” he said in televised remarks.

Fuel rods can crack. Salt crust can further serve to isolate fuel rods from the water and cause fuel rods to heat. If the salt crust is thick enough, it can block water circulation between fuel rods altogether, the New York Times reported.

As the fuel rods heat, the zirconium metal cladding outside them begins over crack. This then leads to emissions of radioactive gasses from the uranium fuel inside.

Pleym told NRK Television that temperature measurements at the reactor had earlier led to the conclusion that its situation was stabilising. But Pleym now says the optimism was misplaced.

TEPCO blamed the precipitous drop in water in reactor No 1 on a faulty gauge that monitors the water level in the pressure vessel in the reactor No 1 building, Kyodo news reported.

TEPCO said new water measurements taken this week, after workers in protective suits fixed gauges in the reactor No 1 building, indicated that water pumped into the pressure vessel had quickly leaked out.

Once the gauge was reset, workers discovered Thursday that the water level had dropped more than 1 meter below the 4-meter-long fuel rods suggesting they had been exposed to the air, increasing the risk of a dangerous full meltdown.

Japan’s Nuclear and Industrial Safety Agency (NISA) said that there is a high possibility that the fuel rods have melted and are now being cooled by water in the bottom of the pressure vessel.

The vessel’s relatively low outside temperature of 100-120 degrees Celsius indicated that the rods had dropped to the bottom of the vessel and were under water, TEPCO said, corroborating NISA.

“The temperature of the pressure vessel was 100-120 degrees, which is considered to be the level where the fuel rods are being cooled down in a relatively stable manner,” a TEPCO official told Agency France Presse.

The company said it suspects there is a leak in the pressure vessel since the water level was low despite the company pouring 150 tons of water a day on reactor No 1 to cool it.

Since the 9.0 magnitude quake and 15 meter tsunami hit Fukushima Daiichi 61 days ago, knocking out primary and back up cooling systems for all six of the reactors at the plant located 240 kilometers north of Tokyo, rescue workers have had no choice but to inundate the facility with hundreds of thousands of tons of sea water a day to cool down overheating nuclear fuel.

The three reactors that were in operation at the time of the quake and tsunami – reactor Nos 1, 2 and 3 – have overheated. That compounded the natural disaster by spewing vast quantities of radioactive material into the atmosphere.

Efforts to cool the reactors and spend nuclear fuel storage pools have led to leaks of highly irradiated water into the Pacific Ocean. One such leak from reactor No 2 was plugged last month, but had poured unabated since the quake.

TEPCO officials today said the reactor might again be leaking water. The company also reported today that highly radioactive water was now leaking from reactor No 1.

TEPCO has struggled to stop spills into the Pacific Ocean but reported yet another one on Thursday, saying water had leaked into the sea from a concrete pit near reactor No 3.

Samples of seawater taken near the plant contained cesium-134 at a concentration 18,000 times the permitted level, the utility said, adding that the spill had been stopped by filling the pit with concrete.

Workers have been able to install air filters inside the reactor No 1’s building to contain radioactive particles and have begun filling the primary containment shell around the reactor core with water in an attempt to draw heat off the core. The plan is to recirculate that water through a heat exchanger to cool it, said Yoshikazu Nagai, a spokesman for TEPCO, CNN reported.

Similar plans are being considered for reactor No 2, which also is believed to be leaking radioactive water, and 3, where engineers noted a disturbing rise in the reactor’s temperature readings last week, Nagai told CNN.

“First we have to tackle reactor No 1, and we need to see if we can succeed,” he said.

Meanwhile, equipment that will be used to decontaminate water pooling in the plant’s basements is expected to arrive by mid-May.

Hundreds of thousands of tons of radioactive water have flooded the basements where the cooling systems were housed, making it impossible for workers get into the facilities.