In a critical victory, workers at Fukushima Daiichi have managed for the time being to plug a leak of radioactive water from reactor No 2, which was reported to be millions of times over the legal limit for radioactivity that was gushing into the Pacific Ocean, Japanese officials said.

Published on April 6, 2011 by Charles Digges 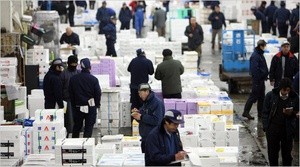 But they also said they had dumped nearly some10,000 tons of radioactive water from the plant’s wastewater treatment facility into the Ocean as of noon Wednesday. They also dumped an additional 1,500 tons of water that had pooled in reactors Nos 3, 4, 5 and 6.

Further afield, in the Bay Area of California, researchers at the University of California, Berkeley, turned the notion that “harmless” levels of radiation reaching the US West Coast from Japan on its head, citing that iodine-131 in rainwater in San Francisco water has now been detected at levels 18,100 percent above federal drinking water standards. Levels of iodine-131 found in three liters of water collected by the university measured an average of 20.1 becquerels per liter, or 543 picocuries. Federal drinking water standards for iodine-131 are 0.11 bequerels, or 3 picocuries.

Radiation levels in the water spewing from reactor No 2 at Fukushima Daiichi tested 7.5 million times the legal limit on Saturday. On Tuesday, it was still 5 million times above the norm, Tokyo Electric Power Co (TEPCO) said.

The water dumped into the sea from the waste treatment plant was said by Chief Cabinet Secretary Yukio Edano to have 1/200,000ths the amount of radiation that had been leaking from reactor No 2. This is still 100 times over Japan’s relatively low legal limit of radiation, according to TEPCO.

Early on Wednesday morning, authorities with TEPCO said they noticed that water had stopped gushing from the leak at reactor No 2.

On Tuesday, though, the government said that a fish caught about 60 kilometers away was found to have high levels of radioactive iodine 131, prompting it to announce radiation safety levels for fish of up to 2,000 becquerels of iodine 131 per kilogram, the standard used for vegetables in Japan. It was unclear how the new regulations would be enforced.

An initial attempt to pour concrete to fill up the 8-centimeter crack, through which the water was pouring, failed. And there were no immediate indications that the injection Sunday of a silica-based polymer, called “liquid glass” worked either – until Wednesday morning. Workers poured 3,000 liters of gel-like sodium silicate onto the rocks supporting the pipe

The plugging of the crack in the concrete shaft meant that by Wednesday afternoon Japan time there were no major emissions of radioactivity into the air, water or ground, said officials.

But Bellona’s nuclear physicist Nils Bøhmer said that clogging the leak with a polymer would not likely offer a 100 percent fix to the problem, though it will buy workers some time as they endeavor to trace the source of the leak.

Edano, in a new switch to transparency, also warned that the victory over the leak at reactor No 2, though important, was minor.

“Is it completely stopped? Are there any other areas where (radioactive) water is being released?” Edano told a press conference. “We cannot be optimistic, just because we were able to plug this one.”

Hidehiko Nishiyama, an official with Japan’s nuclear and industrial safety agency, said Wednesday that authorities are aware that other problems could arise, especially as excess water may still be flooding the No. 2 unit’s turbine building basement.

“(We) are aware that water buildup may lead to more leakage somewhere else,” he said, according to CNN.

The massive water build up in reactor No 2 and other reactors is a result by rescue workers to douse overheating reactors and spent nuclear fuel pools whose coolant system power was completely crippled on March 11, the day the quake and a 15-meter tsunami hit the Northeast Japan, where the 40 –year-old, six reactor Fukushima Daiichi plant is located. Technicians bombed the reac

Edano conceded to reporters that he had done a poor job explaining the dump of the total of 11,500 tons of irradiated water into the Pacific that was begun on Monday.

“We should have reported (more information) to the people who may be concerned, especially to the neighboring countries,” Edano said, amid reports from South Korean media that officials in Seoul were among those upset.

“It was a measure to prevent more serious marine contamination, but we needed to explain the reasoning better.”

“We regret having caused concern to other countries because of the discharge of the radioactive water,” said Hidehiko Nishiyama, deputy director general of the Nuclear and Industrial Safety Agency, the industry regulator. “We will try to avoid further dumping of contaminated water as much as possible.”

Members of Japan’s fishery association voiced their ire in a Wednesday morning meeting with TEPCO officials. The fishing industry trade group’s officials claimed they were totally ignored after they asked the utility not to dump radioactive water into the sea, only to find out, hours later, that the process began, said CNN.

Fishermen further called the Japanese government onto the carpet for its repeated claims that nuclear energy was safe.

Small fish caught Friday — before the intentional dumping began — had 4,080 becquerels of iodine 131 per kilogram. The fish were also caught well beyond the 20 kilometer safety radius established by the Japanese government around the plant.

The fish also contained cesium 137, which decays much more slowly than iodine 131, at a level of 526 becquerels per kilogram.

“Clearly the fish are consuming highly radioactive food,” Paul Falkowski, a professor of marine, earth and planetary sciences at Rutgers University, told the New York Times. But Professor Falkowski emphasized to the paper that even those levels were not likely to present health hazards in Japan or elsewhere, since fishing is restricted in Japan and these levels of radiation are not likely to travel far.

Other experts on radiation debunked that claim, saying it was nearly impossible to get a full sense of the scope of the environmental and health risks until the Japanese released information on radiation levels in more species of fish and seaweed and in a greater number of locations, and noted that measurements of radioactivity in the water are not good indications for how radiation may be entering the food chain.

Edano acknowledged on Wednesday the difficulties facing the fishing industry and the need to keep them abreast of major developments that might affect the safety and quality of seafood.

The Japanese government is considering “provisional compensation” to give a more immediate boost to fishermen, ahead of a more final payment plan that may be established in the future.

Some farmers also are expected to get payouts following the imposition of restrictions of certain produce and milk due to radiation concerns tied to the nuclear crisis.

Michael Friedlander, a former senior U.S. nuclear engineer, told CNN that authorities will continue to have problems related to excess radioactive water — and the need to dump some of it — as long as they infuse huge amounts in to prevent fuel rods from overheating in reactors’ cores and spent fuel pools.

“This is not a one-off deal,” Friedlander said of dumping radioactive water into the ocean. “This issue of water and water management is going to plague them until they can get (fully operating) long-term core cooling.”

Bellona’s Bøhmer  agreed, saying “This will be the first dump of many in a process that is going to continue for months.”