In array of catastrophes at Fukushima Daiichi, dangers at spent fuel cooling ponds come into focus

Concern about an uncontrolled chain reaction – in the open with no containment vessel to offer protection – is mounting about the fuel storage pond located atop Reactor No 4 at the Fukushimi Daiichi plant, which has suffered two fires since yesterday as water in the cooling vessel has essentially boiled off. 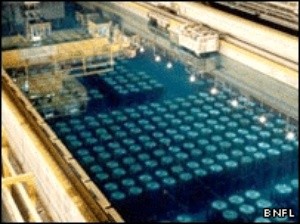 The Guardian, which is conducting full scale monitoring of the crisis on its website, said that there fuel in reactor No 1 has partially melted, warned of a total fuel melt in the core of reactor No 2, cited radiation leaks from the plutonium fuel based No 3 reactor, critical coolant shortages and rising temperatures at reactor No 4, and cast a worried eye on the situation of the plant’s fuel storage ponds.

Though reactor No 4 was shutdown for repairs when the 9.0 quake and tsunami hit Japan last Friday, it’s fuel is still generating heat – all the more so now that coolant system difficulties have begun to plague it and reactor Nos 5 and 6, which were also in shutdown mode.

The potential for a build up of a controllable chain reaction in the fuel pond there – in the open air – is even more likely there than in the reactor cores of embattled reactors No 1, 2 and 3, said Bellona’s Alexander Nikitin, chairman of ERC Bellona in St. Petersburg.

The risk is made all the worse, he said, by the unorthodox methods Japan has been suggesting to cool it, such as dumping water from a helicopter, which would not bring about an explosion, but a lot of sparks and smoke.

Nikitin wryly summed up by saying “it’s hard to make the situation worse than it is.”

Bellona’s nuclear physicist Nils Bøhmer said of the fuel pond situation that “This is very serious because the fuel is outside of any kind of containment,” adding that, “particularly, this increases radiation to which people could be subjected,” such as caesium, strontium, uranim and perhaps plutonium.

Each reactor at Fukushima Daiichi has its own spent nuclear fuel pond, and typically stores its fuel at a depth of 10 meters to keep its cool and protect people in the vicinity from gamma radiation. But the water level in the pond –  if any – is unknown.

The fuel cooling pond at the top of the reactor building in reactor No 4 is crammed with both spent nuclear fuel as well as fresh fuel. As part of the maintenance procedures, Tokyo Electric Power Co (TEPCO) moved fresh uranium fuel rods on December 1 into the pond, the Los Angeles Times reported, which also houses old spent fuel rods spanning many years.

If official information is correct, the pond is shoulder to packed with rods that would generate heat even if there were water in the pond. Once water that bore that thermal energy away stopped circulating after the quake and the tsunami, the water would have reached boiling point.

Should the boiling persist the fuel rods would be exposed to the open air, something that could, according to a 2006 study by the US National Academy of Sciences cited by the LA times, trigger a catastrophic fire in a spent-fuel pool that would result in large releases of radioactive material – which may explain yesterdays two fires at the pond.

If the rods become exposed to the air, accorded to the National Academy of Sciences report, their zirconium tubes begin to react with oxygen and heat up even more, a type of oxidation fire. At some point, the material inside the tubes melts and can release highly radioactive isotopes such as cesium-137 and iodine-131.

According to the latest news on Wednesday evening in Europe, whatever water remains in the ponds is boiling and no efforts at cooling the pond in No 4 have succeeded, according to the Russian news program Vesti.

The metal reacting with the steam is leading to hydrogen production, which could explode, as it has so many times before at the plant.

Tokyo Electric Power Co, TEPCO, is beginning to raise the alarm about the fuel pond as well.

“In the worst case, the pond could explode, and there is a large chance of that,” said a TEPCO representative. “In this case the substances that are stored in special containers would explode in the open.” TEPCO had earlier alerted the Japanese nuclear safety agency of this eventuality.

Given TEPCO’s own acknowledgement that danger is hand, the fuel pond issue is one of the central dangers in the current crisis.

Why the water level fell in the cooling pond is not yet known. There may have been leaks due to the earthquake, or the fires may have helped burn it away.

To aver this, water is needed – but water itself is a neutron moderator and could, however slight the chance, reinvigorate criticality – or a chain reaction, in the rods.

This leaves TEPCO between the devil and the deep blue sea. Earlier, helicopter dumps on the fuel pond were abandoned because of excessive radiation above No 4. Now all that is apparent is that the fuel pond must, under whatever safe circumstances available, be cooled.