Finland’s parliament votes for first nuclear power plant in western Europe in over a decade bringing relief sighs out of nuclear industry. 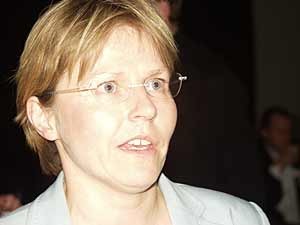 European Transport and Energy Commissioner Loyola De Palacio has welcomed the recent decision of the Finish Parliament to build a fifth commercial nuclear reactor. Russian Minister for Nuclear Energy, Aleksandr Rumyantsev, expressed his hopes that Russia would win the bid to construct the reactor. Amid this the greens abandon the Finish government in protest.


“It is impossible to reverse the decision now,” said Heidi Hautala, European Parliament member from the greens in an interview with Bellona Web. “The political pressure is quite strong, but anything can happen by 2010 before the plant should be actually completed.”


The final vote on Friday last week in favour of the proposal to allow the power company TVO to build a new nuclear reactor was 107 to 92 with no absentees or abstentions.


The authorisation for the construction of the plant will be made by the Government that takes office after next year’s March elections. TVO says that it expects that the new nuclear facility should be operational by 2010. 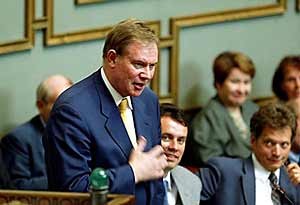 The dependence on the Russian gas supplies was one of the arguments used heavily in campaign for endorsement of the fifth reactor construction.


“Nuclear power is a climate-friendly form of energy production, causing no carbon dioxide or other emissions. Therefore, utilising nuclear power is a good method of preventing global warming.”


This “straight and forward argument” stands on the Finish energy company TVO web site and that was the second argument used by the pro-nuclear lobby. Finland has to build the plant to meet the emissions quota set by the Kyoto agreement.


But Heidi Hautala says that it is not exactly right. Finland does not have to build a nuclear power plant to meet the Kyoto requirements. The country could well do that increasing the use of renewable energy sources — such approach was proposed by the greens but was rejected.


“The majority in the government chose not to go ahead with revolutionary energy policies but rather to rely on the status quo,” Hautala said.

The nuclear energy debate in Finland has been lasting for the past 20 years. In the meantime the western European countries have a split in their approach to the use of the “peaceful atom.” Sweden was the first country to hold a referendum on nuclear energy in 1980 and decided to phase it out. Germany and Belgium have more recently pledged to avoid this technology in future and many other countries have explicitly said they would build no more nuclear power plants. France, however, stands traditionally pro-nuclear, cultivating nuclear energy as a national pride.


Although being a great support to the western European nuclear industry, some experts play down the significance of Finland’s decision.


The International Energy Agency predicts a sharp drop in nuclear’s importance in western Europe in the next 20 years, its share in electricity consumption falling to 16 percent from 31 percent by 2020. This reduction will be compensated to a greater degree by an increase in natural gas and, to a much lesser extent, growth in renewable energy.


But due to unpredicted fossil fuels price fluctuations, those countries who have already said no to nuclear still keep nuclear power plants in operation for long “phase-out” terms.


On the other hand, nuclear power will not enjoy the vast support by the national governments like it was in the past with liberalisation of European energy market, Peer de Rijk from WISE said to Reuters. And without governmental support nuclear energy may still have hard economy, taking into consideration management of radioactive waste and spent nuclear fuel. Suffice it to say, no country in the world has found a way to dispose of high active nuclear waste, primarily spent nuclear fuel, although research has been underway for almost two decades.


Greens have to be back in fight

Nuclear industry smelling the ripe time is working actively to make nuclear a part of renewable energy sources and squeeze it into the Kyoto agreement implementation.


Heidi Hautala says that until today each EU member state was to decide whether to develop nuclear energy sector. Now there are calls for a new discussion, which suggests European Commission involvement into such issues.


“Including nuclear energy into renewable sources is an illusion,” says Hautala. But to prove that, using both environmental and economic arguments, is the job for the greens relaxed by the previous victories.