NEW YORK – In the wake of a plea from last week’s Group of Eight summit to Iran to stop enriching uranium, and a threat from Israel that it will strike the Islamic Republic’s nuclear installations, Iranian president Mahmoud Ahmadinejad has said he does not care if the United Nations (UN) passed any more resolutions against his country over his nuclear programme.

The United States has also said it is ready to back military action against Iran in conjunction with Israel should sanctions fail to ratchet down Iran’s uranium enrichment programme. But it remains unclear if Washington and Tel Aviv have imposed any deadlines for stepped-up sanctions to bring about their desired result, raising the level of suspense in diplomatic circles.

Ahmadinejad’s defiant response to the West also came in the wake of an announcement by the UN’s International Atomic Energy Agency (IAEA) that Iran could have as many as 8,000 uranium centrifuges running by December, raising significantly the risk that it could be building nuclear weapons, diplomats said.

The UN Security Council has imposed two rounds of sanctions against Iran, and world powers are now threatening to impose more as fears grow that Iran is indeed pursuing a nuclear bomb programme. Ahmadinejad, apparently, wishes to stoke those fears.

"The Iranian nation does not give the slightest value to your resolutions," Ahmadinejad said in a televised speech Tuesday.

French Foreign Ministry spokesman Jean-Baptiste Mattei told reporters that: "The information (about the 8,000 centrifuges), would obviously, if confirmed, increase the concerns of the international community in this respect."

Tehran is on track to have 3,000 on line in July, diplomats briefed on IAEA inspections told Bellona Web Wednesday, enough to yield enriched material for a bomb within a year if there were no hitches and if Iran wanted it badly enough. The country has repeatedly said that it is only pursuing a peaceful nuclear energy programme. 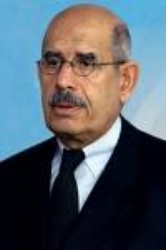 He invoked that Iran was a signatory of the Nuclear Non-Proliferation Treaty, which gives it the right to develop nuclear power under safeguards of the IAEA. He said Iran is unfairly singled out for its nuclear ambitions – which he reiterated were aimed at building a network of nuclear power plants, allowing the country to conserve its massive oil and gas supplies for export. The first of these plants, scheduled to come online later this year, is a 1000-megawatt, $1 billion light water reactor built by Russia in the Iranian port of Bushehr.

"What the Iranian nation says about the nuclear issue is just one word and that is ‘justice’. If there is a law, it should be for everyone," Ahmadinejad said.

"(They) don’t even want us to have science and technology…This injustice will not be acceptable for the Iranian nation."

Iranian foreign ministry toned down but still pugilistic
Iranian Foreign Ministry spokem Hosseini lashed out at the G8 threat of imposing more sanctions against the country, saying that Iran’s principled policy is to defend its "indisputable rights," Xinhua reported.

"Bringing up Iran’s nuclear issue in the UN Security Council is clearly contradictory to international community demands," he said.

"Iran is ready to participate in any kind of negotiations upon goodwill and without illogical and unilateral preconditions," he said, according to Xinhua.

The IAEA says Iran must answer questions about its ambitions before its programme can be given a clean bill of health, diplomats told Bellona Web.