After inflaming the West by skipping its August 31st deadline to shut down its controversial uranium enrichment programme or face United Nations (UN) endorsed sanctions, Iran has found a defender in Russia, a powerful member of the UN Security Council.

Published on September 11, 2006 by Charles Digges 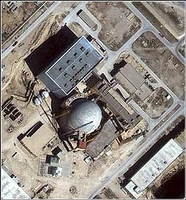 While it is no surprise that Moscow would have come to the aid of its long time business partner in oil and ostensibly peaceful nuclear technology during talks held this weekend in Berlin, Russia, with its veto power in the UN Security Council, could become the swing vote over whether the western body will endorse sanctions against the Islamic Republic.

China, which has veto power on the council too, also rose to Russia’s defense, encouraging more diplomacy before imposing sanctions.

Last week’s security council talks were fraught with indecision and disagreement over what sort of sanctions should be applied to stop Iran’s nearly functional uranium enrichment programme, which runs the gamut from mining small quantities of native uranium to increasing uranium purity in centrifuges.

Moscow is, therefore, in a unique position to make certain points about how its foreign and non-proliferation policy will not be dictated by the West, and to throw gas on the fire of mutual remonstrances that has emerged between the two countries in recent years. Such an approach, according to analysts, would not be surprising.

“Anti-Americanism is a fixture in Russian foreign policy these days, and it is just getting worse,” said defense analyst Pavel Felgenhauer in a telephone interview from Moscow with Bellona Web.

A nuclear hodge-podge
Iran’s nuclear programme, includes technologies that, if properly applied, could give the country the atom bomb within a decade.

Iran’s nuclear effort is an amalgam of technology supplied by Russia, which is building a nuclear reactor there and bringing Iranian nuclear scientists to sensitive experimental nuclear sites outside Moscow for training, combined with more dangerous know-how reportedly furnished by Abdul Qadeer Khan, the rogue Pakastani nuclear scientist who is currently under house arrest, diplomatic sources told Bellona Web.

The reactor Russia is building for Iran is a 1,000 megawatt, $800m light-water reactor in the Persian Gulf port town of Bushehr. It is due to come on line late this year or early next year. According to nuclear officials in Moscow, Russia is ready to make the first 100 tonne delivery of uranium fuel to Iran when the reactor is complete.

“This is what really scares the Americans,” said Felgenhauer. “That the Iranians will get their hands on that uranium.”

According to Felgenhauer, some 5 to 15 percent of any uranium shipment could be diverted without notice and sent on to use for weapons-making purposes. According to Bellona calculations, the Bushehr reactor only requires 75 tonnes of uranium fuel to run for the nxt four years.

Slow diplomatic progress
Some diplomatic progress was reported Sunday between Iran and the European Union (EU) as officials from both sides said they are striving for a compromise to avert the threatened UN sanctions, and were expected to resume talks on Monday, Agencie France Presse reported.

“The meeting, the hours of work, have been productive,” said Javier Solana, the EU’s foreign policy chief, after two rounds of talks in Vienna with Ali Larijani, Iran’s top nuclear negotiator. “We have clarified some of the misunderstandings that existed before.”

He added that he wanted to continue the negotiations.

“We have made progress,” he said. “We want to continue that line, and we are going to meet next week.”

Nevertheless, the United States, which is leading the charge for sanctions, expects its security council partners France, Britain, China, Russia and Germany to spend their week working up a resolution laying out the sanctions they want to take against Iran, and it expects agreement on this theme shortly, US Under Secretary of State Nicholas Burns said last week.

US-Russian row over sanctions
Burns insisted on Friday that Iran would first have to suspend its enrichment programme before negotiations could begin, and that the international community was united in opposing Iran’s nuclear programme. But his arguments will certainly be at loggerheads with Russia’s incantation that Iran’s nuclear ambitions have always been peaceful and that sanctions are uncalled for.

But the Bush Administration could consider a climb-down from across-the-board sanctions immediately in favor of a more incremental but increasingly disruptive approach, western diplomats told Bellona Web. These sanctions could begin with travel and financial restrictions for Iranian officials and escalate to a ban in the trade in materials that could be used for Tehran’s nuclear programme, and freezing Iranian accounts abroad, said the diplomats.

But Russia considers the sanctions package to be too severe.

"Measures of economic pressure must be commensurate with the presence of a real threat to peace and international security," Russian Foreign Minister Sergei Lavrov said last week during the international talks in Berlin that were urgently convened to put pressure on Tehran to scrap its nuclear programme.

Washington implicates Russian in Iranian bomb programme
Washington has never been of the mind that Russia’s nuclear assistance to Tehran has been of an entirely peaceful nature, despite Moscow’s protestations that it is only helping Iran build reactors.

During a visit to Moscow in 2002, former US Secretary of Energy Spencer Abraham excoriated Iran as a terrorist nation bent on building a nuclear arsenal, and publicly called Russia on the carpet for the assistance it was supplying in developing Iran’s nuclear power programme.

An unclassified CIA report to US Congress from the same year also read: “"Even though the ostensible purpose of Russian assistance to Iran’s nuclear infrastructure is for civilian applications, we assess that such support enhances Tehran’s ability to support a nuclear weapons development effort."

Russian officials, however, have been shrugging off such accusations ever since – and former Russian Prime Minister Mikhail Kasyanov even signed a letter of intent in 2003 to build a second reactor at Bushehr and five more reactors throughout Iran.

But it also came to light that year, through satellite photographs supplied to Washington by an Iranian dissident organization, that Iran was in the process of pursuing a two-pronged approach to its nuclear programme.

The photos revealed the construction of a heavy water reactor – which could be used for the production of plutonium powered nuclear bombs – and several uranium centrifuges, which, in sufficient numbers, could enrich uranium to make uranium-based bombs.

The Iranian thorn
Aside from the convergent interests of Russian and Iranian business – which totaled some $2 billion in 2005, according to the Interfax news agency – Russia could be taking aim at American security concerns over Iran “to twist the Iranian thorn in the United States’ side,” said Felgenhauer.

Indeed, Russia seems to be putting itself on its own nuclear war footing of late against its Cold War enemies. Russian television yesterday broadcast footage of Russian Defense Minister Sergei Ivanov telling President Vladimir Putin about the build up of Naval vessels armed with nuclear weapons off the Russian enclave of Kaliningrad.

“Russian-American relations began serious deterioration as of yesterday,” said Felgenhauer. “They are only going to get worse, especially in the area of nuclear weapons agreements.”