Iran said Tuesday it was ready for “serious negotiations’” on its nuclear programme, offering a new framework to resolve a crisis with the West, while a semiofficial Iranian news agency said the Tehran was unwilling to abandon uranium enrichment – the key US demand in the standoff – international agencies reported.

Iran delivered its written response to a package of incentives offered by the United States and five other world powers to persuade Iran to roll back on its nuclear program – and punishments if it does not, the Associated Press reported Tuesday. The world powers, the five permanent UN Security Council members plus Germany, have given Iran until August 31st to accept the package.

The US ambassador to the United Nations, John Bolton, said Washington will `”study the Iranian response carefully” but was prepared to move forward with sanctions against Tehran if it was not positive, a statement issued by Bolton’s office said. The White House held off commenting until it had studied the text. The European Union’s foreign policy chief, Javier Solana, said the document was “extensive” and required ”a detailed and careful analysis.”

The Iranian response comes amid increased bellicosity from Tehran regarding its missile programme, which some western diplomats are concerned can deliver nuclear war heads on a short range basis. On Sunday, the Islamic republic tested 10 short-range Sagaheh missiles, with a range of 80 to 190 kilometres, the official ISNA news agency reported.

In a similar development, the Iranian Navy fired on and seized a Romanian oil rig located in the Persian Gulf Tuesday, according to the Bloomberg news agency. A spokesman for Grup, which owns the oil rig, said 26 oil workers were still on the platform.

Meanwhile, Iranian officials offered no details of the response they sent to the UN Security Council and Germany, but it is apparently geared at enticing those countries into further negotiations by offering a broad set of proposals vague enough to hold out hope of progress in resolving the standoff.

If the Iranians leave the door open to halting enrichment as talks progress, that would drive a wedge in the Security Council between the Americans, British and French on one side and the Russians and Chinese on the other. Last month, Russia said the Council was in no rush to pressure Iran in an effort to strike a more conciliatory tone than the United States.

Tuesday’s announcement was the latest development in the yearlong standoff over Tehran’s nuclear programme. Iran says it wants to master the technology to generate nuclear power, AP reported. At present, Russia is helping Iran build a light-water reactor in the Persian Gulf port of Bushehr, with the promise of some five more power reactors to come. But critics of the apparent nuclear power programme say Iran is interested in uranium enrichment because it can also be used to make the fissile core of nuclear weapons.

The current crisis is playing out against the background of the conflict between pro-Iranian Hezbollah guerillas and Israel, which has bombarded sites in Lebanon for the past 34 days and emboldening Tehran in the uranium showdown with the United States, which is mired in its own war in neigbouring Iraq. There has also been speculation in the West that Iran encouraged Hezbollah to provoke the Israelis to distract attention from its nuclear ambitions, international news agencies reported.

Iran has pursued a confrontational stance on the nuclear issue since the election of President Mahmoud Ahmadinejad last year. The hard-line president has used the nuclear issue to encourage a sense of national pride among Iranians by standing up to the United States and other Western countries.

Larijani refused to disclose whether the response included an offer to suspend uranium enrichment. But the semiofficial Fars news agency reported that Iran rejected calls to suspend “nuclear activities” – or uranium enrichment – and “instead has offered a new formula to resolve the issues through dialogue,” AP quoted the Fars as reporting.

The state-run television quoted Larijani as telling the diplomats that Iran ”is prepared as of August 23rd (Wednesday) to enter serious negotiations” with the countries that proposed the incentives package.

The IRNA official news agency reported that “Larijani said Iran’s answer has logically, fairly and constructively addressed demands of the proposed package, recommending the P5+1 group to return to the negotiation table immediately despite the false atmosphere created against Iran that it was buying time.”

The Western incentives package has not been made public but some details have leaked. They include an offer to lift a ban on sales of Boeing passenger aircraft, providing Iran with some nuclear technology to build reactors for civilian purposes and guaranteeing a supply of nuclear fuel.

Last month, the Security Council set an August 31st deadline for Iran to halt uranium enrichment or face economic and political sanctions. Iran called the resolution “illegal” but had said it was willing to offer a “multifaceted response” to an incentives package that the six powers offered in June, AP reported.

Iranian officials said Tehran offered a "new formula" to resolve the dispute, saying that Iran has provided a comprehensive response to everything said in the western package. Officials additionally indicated that Iran, in its formal response, has asked some questions of its own. Officials would provide no further details, AP reported.

But the Iranians have been vociferously signaling they are not prepared to abandon uranium enrichment as a precondition to talks. Last month, a senior Iranian lawmaker said the country’s parliament was preparing to debate withdrawal from the Nuclear Nonproliferation Treaty if the U.N. Security Council adopts a resolution to force Tehran to suspend enrichment, the London Guardian reported. 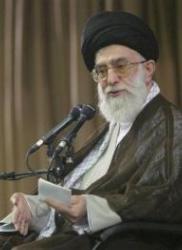 On Monday, Iran’s supreme leader, Ayatollah Ali Khamenei, said the Islamic Republic “has made its own decision and in the nuclear case, God willing, with patience and power, will continue its path,” Iranian news agencies quoted him as saying.

Iran’s former foreign minister Ali Akbar Velayati, who is now a top adviser to Khamenei, said Iran’s national interests, not the West’s demands, should be the basis for Iran’s decision.

"What we have achieved in nuclear technology is worth more than the pressures against us at the international stage,” the semiofficial Iranian Students News Agency quoted Velayati as saying Tuesday.

In February, Iran for the first time produced its first batch of low-enriched uranium, using a cascade of 164 centrifuges.