The US Nuclear Regulatory Commission, or NRC, issued this week an environmental impact report recommending preliminary approval of a plan to build a plant at the US Department of Energy’s Savannah River Site in South Carolina to convert plutonium nuclear bomb cores to mixed-oxide, or MOX, fuel for burning in commercial reactors, NRC officials reported.

Published on February 28, 2003 by Charles Digges 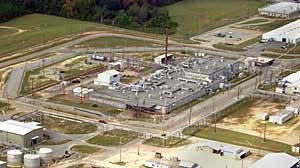 The preliminary approval from the NRC gives the green light to the US Department of Energy, or DOE, plans to move forward in a bilateral surplus weapons plutonium disposition agreement finalized between Russia and the United States in 2000. Under the agreement, Russia and the United States are obligated to destroy, in parallel progress, 34 tonnes apiece of weapons-grade plutonium that each side has declared as exceeding its weapons needs.

The endorsement given by the NRC study is a clear signal that most bureaucratic hurdles have been cleared on the US side to begin construction of the controversial MOX fabrication facility, designed by US nuclear contractor Duke, Cogema, Stone & Webster, or DCS. Moscow, in December, adopted the DCS design for its own MOX fabrication plant to be constructed at the beleaguered — and currently unlicensed — Mayak Chemical Combine in the Urals.

The Bush administration earlier this month asked US Congress for a whopping 30 percent increase for the DOE’s nuclear non-proliferation budget for 2004. If the budget is approved, 80 percent of that increase — $402m — will be poured into constructing the MOX facility at Savannah River Site.

Last year, the Bush administration abandoned another plutonium disposition plan, which would have allowed for at least some of America’s surplus stocks to be immobilized by vitrification — a much cheaper destruction method that environmentalists assert is safer because it provides for the plutonium’s permanent internment. Spent MOX fuel, by contrast, can still be reprocessed to recover plutonium, which arguably defeats the very purpose of the $4bn MOX disposition process.

Focusing on disposition by MOX — which is currently well beyond Moscow’s financial and technical means — also allows Russia to continue its thoroughly documented pattern of staving off efforts to destroy its surplus weapons-grade plutonium. The MOX programme will also give Russia several necessary tools toward the development of a plutonium-based fuel economy, partially at US expense.

At present, Russia’s Mayak facility remains out of commission since Russia’s federal nuclear watchdog agency pulled its license in January after decades of waste dumping violations. The birthplace of the Soviet atomic weapons programme, Mayak is the most radioactively contaminated place on earth.

MOX fabrication puts poor at risk
This week’s NRC environmental impact report on Savannah River Site, or SRS, found any catastrophic accident at the plant to be "highly unlikely." But the report is ringing alarm bells for human rights and environmental groups in the United States, especially because of its finding that a serious accident at SRS MOX would most likely kill or harm poor, non-white residents who live near the plant.

Among the accident scenarios studied in the report, the NRC found that a hypothetical release of tritium at a proposed bomb core disassembly facility within SRS would be the most dangerous. Tritium, which is radioactive hydrogen gas, is used in nuclear weapons. If such an accident were to occur, the report found, it could produce 400 latent cancer deaths in the surrounding neighbourhoods within one year of a potential leak.

"The communities most likely to be affected by a significant accident would be minority or low-income ones, given the demographics and prevailing wind direction," the report said.

The report urged DCS to conduct an information campaign to educate minority and poor communities about the project and the risks involved. The NRC also recommended DCS to work with emergency agencies to see that the communities were prepared in the event of an accident

However, US government documents studied by Bellona Web found that a release of tritium at the SRS facility is not as hypothetical as the NRC environmental impact study implies. According to SRS accident reports, the past decade has seen 283 incidents at the SRS tritium facility, ranging from on-site contamination to leaks of the deadly gas to outside air. More than a dozen reports filed by other facilities within SRS have made note of suspected or actually measured tritium releases or tritium contamination.

In 1999, for example, tritium was released into the outside atmosphere when an aging safety gasket failed. According to the reports, SRS officials had decided it was more economical to use the gaskets until they failed than to undertake a more costly preventative maintenance programme.

Russia’s problems delay progress
But Russia’s own abysmal nuclear safety record, and its hedging on the MOX plutonium disposition agreement, may well hinder the overall progress of the programme, according to DOE budget documents reviewed by Bellona Web.

Dr Edwin Lyman, president of Nuclear Control Institute, or NCI, a Washington-based non-proliferation group, was quoted in American press reports as saying that the DOE’s statement on its budget is "the first admission that the two programmes are getting so out of whack that it may actually require the US to slow down its programme here."

Lyman’s group opposes MOX and wants the surplus plutonium to be disposed of through immobilization.

Arjun Makhijani, president of the Institute for Energy and Environmental Research, which studies nuclear issues, pointed out how the delays in the MOX programme are actually contributing to the dangers that the programme aims to solve.

"Very unfortunately, what is happening is all the plutonium is just sitting around and I believe it may sit around for a lot longer than the MOX programme envisages," Makhijani told the South Carolina-based Greenville News.

Makhijani said three major problems have stalled Russian progress: a lack of money, objections over how the fuel will be designed and disagreement over who is liable if a major accident occurs.

"Until these three issues are resolved, I don’t see how there can be anything but delays," he said.

US also underprepared
The NRC report also raises several questions about the level of preparations on the US side. For instance, the DOE has not identified enough reactors to complete the MOX project according to its timetable — a problem that also plagues Russian planning. According to the NRC study, two nuclear power plants — one in North Carolina, the other in South Carolina — have stated an interest in burning MOX fuel, but no plants have yet applied to burn test fuel, a necessary step for the plants to be licensed by the NRC to burn MOX.

Additionally, the NRC report identified the necessity of constructing a waste solidification building at SRS to deal with spent MOX fuel. However, according to a Greenpeace statement on the NRC report, "the DOE has not even admitted that such a facility is needed."

Finally, the report fails to assess environmental impacts if the US government were to expand plutonium disposal in MOX beyond the 34 tonnes it agreed to destroy.