At the fifth meeting of the Delegation to the EU-Russia Parliamentary Co-operation Committee on November 25th-26th, European and Russian parliamentarians discussed nuclear safety in north-west Russia. In Brussels, the parliamentarians highlighted the importance of signing the MNEPR agreement before nuclear safety projects can be realised. The Delegation also recognised the need for greater European involvement — and funding — in the G8 Global Partnership against the Spread of Weapons and Materials of Mass Destruction. 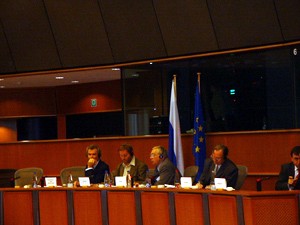 Following the EU-Russia Summit on November 11th — where a Third Progress Report on the Energy Dialogue was presented by the Russian Vice-Prime Minister Victor Khristenko and European Commission Director-General François Lamoureux — the fifth meeting of the Delegation to the EU-Russia Parliamentary Co-operation Committee took place in Brussels November 25th-26th.

The Delegation brought together members of the Russian State Duma and members of the European Parliament, or MEPs, whom exchanged views on nuclear waste and the Multilateral Nuclear Environmental Programme in the Russian Federation, or MNEPR. Several of the parliamentarians at the meeting placed their emphasis on nuclear safety and the conclusion of MNEPR.

Concluding the MNEPR agreement
–> The joint Statement and Recommendations from the fifth meeting of EU-Russian parliamentarians placed special emphasis on the Northern Dimension Environmental Partnership, or NDEP, and cross-border co-operation between the European Union (EU) and Russia. NDEP is a European initiative to channel funds to environmental projects in north-west Europe, especially Russia. At the NDEP pledging conference in July, the European Commission, EU Member States, Norway and Russia pledged 110m Euros for regional projects, including 62m Euros for nuclear safety in north-west Russia.

Point 17 of the joint EU-Russia Statement and Recommendations underlies the urgency of environmental problems due to nuclear waste notably in northwest Russia and for implementing concrete measures of international help.

The MNEPR agreement is an international initiative aimed at clearing up spent nuclear fuel, or SNF, and radioactive waste in north-west Russia. It is hoped that MNEPR will become a universal agreement between Russia and donor states wising to contribute to nuclear safety projects in the region. The agreement aims to regulate tax exemption and liability. Negotiations between Russia and potential donor states over MNEPR have been carried out for years without success.

The importance of signing the MNEPR agreement was raised early on in the EU-Russia meeting. In fact, the debate was started by a Swedish MEP from the Party of European Socialists, Ewa Hedkvist Petersen, whom emphasised the need for Russia to sign the MNEPR agreement as soon as possible so that problems caused by radioactive waste can be tackled, which she addedd are consequences of the Cold War.

The conclusion of MNEPR is required to enable foreign partners to implement nuclear projects and would grant them a legal framework to carry out the work in Russia. The agreement is still under negotiation between Russia and donor countries — including Canada, the European Commission and European Union Member States, Norway, Japan and the US — mainly because the partner states did not manage to find a satisfactory solution to the unresolved liability and tax issues.

But the tax and liability issues must be resolved before the MNEPR agreement can be concluded.

While the US and Norway each have a bilateral agreement which allows them to send to Russia equipment and personnel tax free, other countries do not. Those countries without an agreement must pay Russian taxes, which stops bilateral initiatives taking place. So the signing of MNEPR will create a multilateral agreement for taxes.

The liability issue must also be addressed. This is because much of the work in Russia is to be carried out by contractors from non-donor countries, whom are not covered by the bilateral agreements between Russia and donor states.

A representative from the Russian State Duma, Viktor S Opekunev, stressed the most important problem facing north-west Russia is financing the dismantlement of laid-up submarines and the treatment of SNF. But Russia has neither the money nor the resources to defuel and dismantle these vessels. In Mr Opekunevs view, Russia should not be solely responsible for Russias internal disarmament because it is a global problem. Still, Mr Opekunev stressed that MNEPR should be signed.

MEP Claude Turmes, Vice-Chairman of the Group of the Greens/European Free Alliance, stated that the EU should push the conclusion of the MNEPR because it is preventing the implementation of projects in north-west Russia. But of more importance, perhaps, Mr Turmes brought to the fore the non-proliferation threats posed by the laid-up submarines with SNF onboard.

Tackling proliferation concerns
According to Mr Turmes, the transport of SNF would add to the fears that terrorists might get their hands on material that could be used for weapons. Commenting on the transport of SNF from north-west Russia to the Mayak reprocessing and storage facility in Chelyabinsk county, which, according to the Guinness Book of Records, is the most polluted place on earth, Mr Turmes said:

We should envisage a dry storage on the Kola Peninsula, a far better solution that would limit the transport of SNF and the related problems and risks.

The laid-up submarines with SNF onboard are a proliferation concern, which has been highlighted by reports that terrorist groups like al-Qaeda have been seeking to acquire radioactive material. SNF, while of no use as a component in nuclear weapons, is suitable for the manufacture of a radiological dispersal device, or RDD, such as a dirty bomb.

While a RDD would not lead to a nuclear-yield explosion, it could disperse radioactive contamination over a wide area. The contaminated area could become uninhabitable and if highly populated would have to be evacuated immediately. The most destructive aspect of a RDD would be its ability to cause psychological distress and public hysteria, rather than kill. It could lead to the disruption of a target countrys national infrastructure and economy.

Openness from Russia
–> The issue of openness in Russia was also raised at the fifth meeting of the EU-Russia Parliamentary Co-operation Committee, especially after the Russian security service, or FSB, raided the office of the Irkutsk-based environmental organisation Baikal Environmental Wave November 22nd.

Officers from the FSB confiscated 15 computer hard drives they allege contain ecological information pertaining to a planned $2.5bn oil pipeline to be built through Siberia to China, as well as several 1:500,000-scale maps.

Commenting on the episode at the meeting, Mr Turmes said Im very worried about what I just heard; on November 22nd, the FSB searched the office of a local environmental NGO called Baikal Environmental Wave.

This is an organisation which tries to collect nuclear information. The Bellona Foundation had the same experience before. Now they have good relations with the local authorities, as we could see in Murmansk, he said.

Indeed, good relations helped Bellona to create an Inter-parliamentary Working Group, or IPWG, in 1998. Formed from Russian and Western parliamentarians, the main goal of the IPWG is to address issues of nuclear safety co-operation that require political attention, such as the MNEPR agreement. 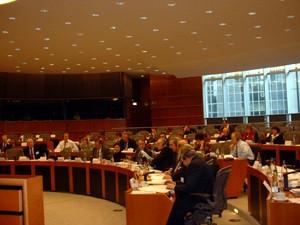 In October this year Bellona and a member of the Russian State Duma, Valentin Luntsevich, organised a trip to Murmansk for a group of MEPs. The group visited the Kola Peninsulas nuclear sites to study nuclear safety and the security challenges in north-west Russia.

On the European Delegations trip to Murmansk, the group visited sites on Andreeva Bay. The MEPs also visited the Nerpa shipyard, where the repair and decommissioning of submarines is carried out.

During the visit to Nerpa, the Chairman of the European Delegation to the EU-Russian Parliamentary Co-operation Committee Bart Staes announced that his group — the Group of the Greens/European Free Alliance — filed an amendment to the EC’s 2003 budget for 85m Euros for assistance in the nuclear sector, which contains a specific item channeling funds for radioactive waste management to the Kola Peninsula. Mr Staes explicitly mentioned that the amendment was prompted by Bellona’s work on nuclear safety in Russsia.

Contributions from Belgium
In light of the G8 $20bn pledge, it is vital that European countries become more active in supporting regional projects. The fact that MEPs pledged their support for nuclear clean-up in north-west Russia during the trip to Murmnask will help to rally more support — and hopefully funding — for nuclear safety projects.

During the Delegations meeting on November 25th-26th, Mr Staes, referring to the October trip organised by Bellona, pointed out: the visit to Murmansk helped me to really understand the problem, and understand more about NDEP.

And I came to the conclusion that my own country, Belgium, didnt do anything. So just after Murmansk, I went to the Belgian government and they decided to award 2.5m Euros, Staes continued.

Action this day
–> Despite the pledges following the G8 Summit this June, no new money is on the table, which is due in part to the failure to conclude the MNEPR agreement.

Nonetheless, a number of countries have pledged their support for the G8 initiative. Japan has pledged $120m and Canada has made concrete pledges. The United Kingdom, too, has allocated funds which are waiting to be spent. But more effort to co-ordinate the planned work and distribute the funds will be needed to make a real impact on improving nuclear security and nuclear clean-up in Russia.

Still, point 18 of the joint Statement and Recommendations of the Russian and European parliamentarians from November 25th-26th welcomes the international help to resolve the most urgent SNF-related problems being offered in the framework of NDEP, which could be realised once the tax and liability issues are concluded.

On the G8 pledge, the EU-Russia Parliamentary Co-operation Committee expects the G8 to make concrete the 10 plus10 over 10 scheme with regard to nuclear clean-up and the non-proliferation of material in Russia.

On the issue of the 10 plus 10 over 10 Mr Staes said: I had recently some contact with the office of Mr Lugar and his people say yes, there is the 10+10 over 10 money but on the European side, the money does not come.

In the US, there is a certain pressure, but a sign from Europe is very important. So we need an international structure to co-ordinate the efforts Mr Staes added.

The realisation of the G8 pledge must therefore include the continued support of the US as well as financial commitments from the other G8 partners. Because the US has already spent $7bn on nuclear initiatives in Russia since 1992, it is important that concrete funding from countries in Europe be made available.

Without new money, fighting the spread against weapons and materials of mass destruction might be extremely difficult. Before that can happen, though, tax and liability issues must be resolved through the signing of the MNEPR agreement.

NDEP also relies on the conclusion of MNEPR. But without the MNEPR agreement, the money pledged will not translate into nuclear projects in Russia.