The embattled Nunn-Lugar act cleared a major hurdle to its reopening Wednesday as the US Senate unanimously passed the Defence Authorization bill, which grants the US president authority to waive the act’s re-certification requirements for three years, and paving the way to destruction for nearly eight months’ worth of backed-up nuclear, biological and chemical weapons in Russia.

Published on November 14, 2002 by Charles Digges 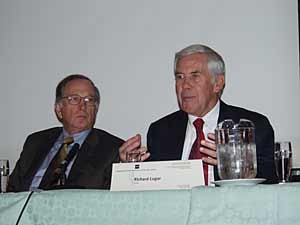 The 10-year-old Pentagon-run programme that spends $400 million dollars a year to dismantle Russian weapons of mass destruction has twice this year sat in the doldrums while details about granting the president powers to waive the programme’s annual re-certification process — as well as other issues in the $393 billion US defence spending package — were debated on the floor of Congress.

“The Nunn-Lugar program is needed to help continue the dismantlement of nuclear, biological and chemical weapons that pose a severe risk of proliferation and is the greatest threat to our national security,” said a statement issued by Senator Richard Lugar, a Republican from Indiana who initiated the Nunn-Lugar programme — officially known as the Cooperative Threat Reduction act, or CTR — in 1991 with then-Senator Sam Nunn, a Georgia Democrat.

Under the US law that will be supplanted by new regulations in contained in the Defense Authorization bill, the president must re-certify Russia’s commitment to Nunn-Lugar activities on a yearly basis. Earlier this year, President George Bush became the first president in Nunn-Lugar’s history to decline Nunn-Lugar’s annual certification over concerns that Russia was not being candid about its stocks of Soviet-era chemical weapons.

Bush’s refusal to certify the programme shut down nearly a third of Nunn-Lugar activities in Russia, and blocked the signing of all new weapons destruction contracts with Russia for six months. Then, in August, Bush signed a temporary waiver that allowed the programme to run until the beginning of the fiscal year, Oct. 1. The programme has been shut down again since then, meaning that it has not been able to accept new contracts for nearly eight months this year.

After Bush declined to certify Nunn-Lugar this year, he paradoxically began lobbying Congress to grant him a permanent waiver from the certification requirement. The subsequent haggling over the waiver became, according to some observers in Washington, a tense struggle within the administration itself, with Pentagon brass opposing a waiver of any kind, and Bush National Security Advisor Condoleeza Rice phoning members of Congress to lobby them for a permanent waiver, congressional sources said.

The compromise that was hit on by the House of Representatives — which also passed the Defence Authorization bill Wednesday — was to require presidential re-certification every three years.

The bill goes next to Bush, who has ten days to sign it and make it law or veto it, Lugar’s deputy press secretary Nick Weber told Bellona Web.

“We haven’t really been told whether Bush will sign it or not, but it’s a major victory that the waiver language is in there,” Weber said in a telephone interview from Washington.

Indeed, noted some congressional aides, it is precisely the kind of language Bush had asked for on the waiver, and they saw no reason that Nunn-Lugar would not be up and running again within the next ten days. Once the bill is signed, Nunn-Lugar will not have to be re-certified for the next three years — a task that will fall to Bush, or whoever may defeat him in the 2004 elections.

Senator Lugar made it apparent in a statement that the lion’s share of Nunn-Lugar efforts this year would be directed toward the destruction of nearly 2 million modern chemical weapons artillery shells and SCUD missile warheads at the Urals chemical weapons storage facility in Shchuchye. The weapons stored there, said Lugar, “are in excellent working condition and many are small and easily transportable. They would be deadly in the hands of terrorists, religious sects or para-military units.”

At a visit to Shchuchye in May, Lugar was told by the Russians that the weapons stored there in a simple barn-like buildings could kill the world’s population some 20 times over.

“The size and lethality of the weapons at Shchuchye are clearly a direct proliferation threat to the American people,” Lugar said.

Under Nunn-Lugar programmes, as of July 7, 2002, 5,970 nuclear warheads have been deactivated, 1,269 ballistic and long-range nuclear cruise missiles eliminated, 829 missile launchers destroyed, 97 long-range bombers eliminated and 24 ballistic missile submarines destroyed in Russia and former Soviet territories, according to the US government’s Defense Threat Reduction Agency. In addition, thousands of former Soviet weapons scientists have been supported by US funds in non-weapons related research.