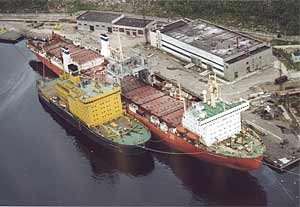 These security supplies were furnished under Nunn-Lugar act — also known as the Cooperative Threat Reduction act (CTR) — which has spent approximately $5 billion the past decade of its existence to upgrade security around a third of Russia’s weapons grade plutonium and uranium. It has also dismantled or destroyed more than 5,000 Soviet warheads, along with hundreds of ballistic missiles, bombers, submarines and silos.

Specifically, these stranded protection devices were paid for by the Weapons, Protection, Cooperation and Accounting (WPC&A) programme, which is run by CTR. This programme resembles the Materials Protection, Cooperation and Accounting (MPC&A) run by the US Department of Energy (DOE), and is the Unites States’ flagship effort to secure, control and account for weapons-usable nuclear material in the former Soviet Union. It also has not had nearly the access problems that its CTR cousin has had.

For fiscal year 2003, the Bush administration has requested a total of $233 million for the MPC&A programme — a figure that would have been considerably lower had it not been for Sept. 11, according to a recent report on the US administration’s non-proliferation budget published by the Russian American Nuclear Security Advisory Council (RANSAC), a private organization that advises the two governments. Indeed, the Bush Whitehouse only requested $173 million for the programme in 2002, but when Congress passed a supplemental funding package that gave MPC&A another $120 million in Sept. 11’s aftermath.

Protection vs paperwork
While the MPC&A has ironed out its fiscal problems, the WPC&A has quietly become something of a political battlefield among warring hard line bureaucracies in Russia and the United States, and the fences and security equipment for Russian warhead sites are the spoils.

The fences and security equipment lay untouched because of joint bureaucratic ineptitude on the part of the Pentagon and Moscow which both have their own abstruse, pedantic points to make about future non-proliferation activities in Russia, analysts, suggest.

The Pentagon says it would be happy to help put the fences up, but its hands are tied by a US federal Law — the Federal Acquisitions and Regulations act (FAR), which prevents the US government from paying for work it can’t inspect. There is also no shortage of Pentagon hardliners — many of whom who would torpedo CTR over a long held view that subsidizing weapons destruction in Russia frees up money the Kremlin can divert to weapons development programmes.

On the other side, Russia says it can’t pay workers to install the equipment. Plus, the Russians don’t want inspection teams from the Pentagon run CTR at the top-secret facilities where the security packages were headed. A source at Russia’s Federal Security Service — the government counterintelligence service known as the FSB — told Bellona Web that the shipments could be packed with spy equipment.

To cut through this red tape, there were even discussions of simply allowing a Polaroid photograph of someone to stand in front of a newly installed fence holding a current newspaper to suffice as proof for the Pentagon that the equipment had been installed, former and current CTR and DOE officials told Bellona Web.

The problem of the unopened crates was confirmed by these same officials, as well as by a US Government Acquisitions Office report, and it must be noted that such snags are an exception. Approximately a third of Russia’s weapons-grade and plutonium security has been upgraded thanks to Nunn-Lugar. But there’s still enough weapons-grade uranium and plutonium, in more than 100 buildings Nunn-Lugar experts have never made security upgrades to, to make thousands of nuclear weapons.

Indeed, former Senator Sam Nunn and Nunn-Lugar other-author, said at a gathering of and arms specialists in Moscow last week that CTR has avoided such bureaucratic standoffs in 90 percent to 95 percent of the cases.

Despite the program’s successes, much remained to be done, said Sen. Richard Lugar, the other author of Nunn-Lugar act, at the Moscow gathering: Only 40 percent of Russia’s nuclear storage sites have received US assistance to upgrade security, and new security systems had been installed in only 20 percent.

In the face of such figures, the crated fence problem is absurd, but it highlights the mindless roadblocks that are also a part of Nunn-Lugar, which show no signs of abating even after Sept. 11.

”That’s an example of bureaucratic obstacles we have in this program,” former Senator Sam Nunn, said in reference to the fence hold-up at the Moscow gathering, which was arranged by the non-governmental Nuclear Threat Initiative, or NTI, which was founder by Nunn and media mogul Ted Turner, who pledged $250 the endeavour million over the next five years — the most money a private citizen has ever invested in non-proliferation.

Nunn said he could not give any more details about the location US and Russian lawmakers of the stranded shipments.

US White House schizophrenia jeopardizes inspections
What so frustrates RANSAC’s Kenneth Luongo about the fence hold-up goes back to the Bush Administration’s decision in March to not certify the Nunn-Lugar programmes — which derailed any opportunities in the foreseeable future — to get those fences up.

By US law, CTR must be reviewed by the Pentagon annually to determine that Russia is committed" to its CTR obligations. This spring, the programme was not certified over questions of Russia’s openness about chemical and biological stockpiles and over the Kremlin’s refusal to share information about certain Soviet strains of bio-engineered Anthrax.

This has led not only to a six to eight month lag time while congress develops a waiver granting the president the right to forgo certification, but also may have scratched for good an invitation from the Kremlin to CTR officials — an invitation US officials had tries to solicit for years — to inspect eight sensitive sites that would have received some of those dusty security crates.

According to Luongo, there is no firm knowledge that US inspections teams actually visited the sites. But he did say that the Russians had quietly offered an invitation, which was quashed as soon as the Bush administration ground CTR activities to a halt by deciding against certification.

"After six, seven, eight years, finally it’s coming to fruition, and these guys pull the plug to make an ideological point," said Luongo in a telephone interview.

"You know, where are we? It’s the triumph of politics or polemics over practicality. Okay, you’ve made you political and rhetorical point about the Russians not making accurate declaration about CW and BW, so lets try to work on this problem — but in the meantime you’ve got this problem of warhead security which is being impeded."

Luongo added that there have always been questions about the accuracy of Russia’s reporting on it CW and BW stockpiles, but "we have been willing to work with them on this side in order to keep the main thrust of the CTR programme moving forward."

The invitation to inspect the sites was hard-won and may never come up again. Even if the Russians were to re-extend it within the next weeks — while Congress debates what sort of waiver to grant the president — Luongo said the American defense bureaucracy wouldn’t allow inspection teams to go. In short, nothing can happen until a waiver is approved.

Bush antagonism of CTR
Luongo added that the Bush Administration’s antagonism of Nunn-Lugar began as soon as he took office with budget slashing plans in hand. After Sept. 11, though, Congress reversed the cut, freeing up $135 million in supplemental funding for the for the US-Russian proliferation programme.

"Then the Bush administration makes an announcement right after the supplemental was passed saying sorry this wasn’t on our screen so next year we’re going to pay more attention to it and increase the budget,’" said Luongo. "

"So, this year they put together a decent budget and then they sabotaged themselves by doing this certification."

Luongo said that there is "tension" within the administration about these non-proliferation programmes — tension which is brought out in bold relief whenever Bush takes the podium, as he did at the may summit, to speak of "eliminating the legacy of the cold war"

"It is absurd on it s face to make a statement like that and then turn around and then not do anything to break this programme free from the current constraints that its under, "Luogo said incredulously. "Liquidating the legacy of the cold war IS what the CTR program IS all about."

The waivers
As to the question of the waiver, a House of Representatives bill has passed through to the Senate that would grant the president the right to pass a waiver for certification this year only. The Senate is also considering its own two versions of the bill, both of which would make the waiver permanent.

But why certification was declined to begin with — thus setting in motion several months worth of US Government machinery to churn out the waiver — is a question that points most analysts to Pentagon hard line elements that have President Bush’s ear.

"I believe the request [to see information pertaining to Russia’s bio- and chemical weapons programs] was made, in part, because they knew the Russians would refuse," Jon Wolfsthal, a former DOE official now at the Carnegie Endowment told Bellona Web.

"What you’ve got is a bunch of ideologues saying the Russians owe us this information," said Luongo. "They’re being pushed on by the intelligence agencies who have some kid of axe to grind on this question, I assume, and they decided not to certify."

But the final point, in Luongo’s view, is being made with the pedantry only pencil pushers can appreciate.

"The politics of this waiver are not comprehendible," he said. They’re putting at risk real security improvements for the sake of paper documentation, which you’re never going to be able to verify to 100 percent anyway."