The Yekaterinburg nuclear submarine – which two years ago was ravaged by a fire during repairs in dry dock while its intercontinental nuclear ballistic missiles were still onboard – will soon be put back into service in Russia’s northern fleet, according to a statement from the Zvezdochka shipyard where it was repaired. 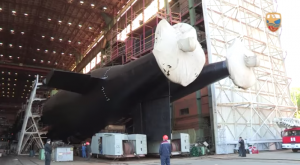 The Yekaterinburg nuclear submarine – which two years ago was ravaged by a fire during repairs in dry dock while its intercontinental nuclear ballistic missiles were still onboard – will soon be put back into service in Russia’s northern fleet, according to a statement from the Zvezdochka shipyard where it was repaired.

The dramatic December 2011 blaze lasted for 20 hours, killing nine, and flames were reportedly visible from some 10 kilometers away, and damage was extensive. Video footage of the fire can be viewed here.

According to the Zvezdochka release (in Russian), the shipyard repaired the Yekaterinburg’s critical navigation and weapons systems after the fire that was sparked by shoddy welding works in 2012. The fire nearly destroyed the vessel during short-term repairs at the Roslyakovo naval base near Murmansk.

The submarine, which was taken out of Zvezdochka ‘s dry-dock Monday to great fanfare and set back afloat, will now undergo a series of smaller repairs before it is released back into service during the fourth quarter of this year, Zvezdochka said. The Yekaterinburg sub Monday rolling out of dry dock with visible welds along its hull. (Source: Zvezdochka YouTube video)

Russia has recently turned its attention to beefing up its submarine presence in the Arctic region, and Zvezdochka director Vladimir Nikitin indicated the that Delta IV class subs, of which the Yekaterinburg is one, are “integral to Russia’s naval nuclear deterrent.”

That such a damaged sub is closer to reentering active service concerns nuclear scientists. The sub – as shown in a YouTube video of its release from dry dock– still bears extensive scars from its accident (visible at the 5:15 time marker).

“It is alarming that such an old submarine, so extensively destroyed by a major fire, is now back on the water again, said Nils Bøhmer, Bellona’s general director and nuclear physicist.

“There is unfortunately a big risk that next time this submarine is hit by a fire or another accident, we could have a real disaster,” he said.

The risk is less than hypothetical: Roslyakovo is one of three shipyards owned by Russia’s United Shipbuilding Corporation that have seen major accidents during repair works since 2011.

The original fire at Roslyakovo

The Yekaterinburg fire burned for 20 hours, and the submarine had to submerge to douse the flames. Photographs posted at the time by Blogger51, an unofficial Northwest Russian news site, showed an enormous hole cut in the port side of the submarine’s bow, exposing its hydro-acoustic navigational chamber. Bellona analysis of Blogger51’s photos concluded that the fire’s main locus was the hydro-acoustic chamber, located between the inner and outer hulls of the submarine near the torpedoes.

While the hydro-acoustic chamber is filled with water when at sea, at port the chamber contains heavy flammable oils and other combustible contaminants.

The navigational antennae contain oils for isolation and are positioned near air compressors, which fanned the flames to impressive heights, said Alexander Nikitin, Chairman of the Environment and Rights Center (ERC) Bellona, and a former Russian submarine captain.

ERC Bellona’s Nikitin also said his review of the damage revealed nuclear missiles had been aboard the submarine during the fire, something Russia’s Deputy Prime Minister Dmitry Rogozin, finally admitted was true two months later.

Zvezdochka director Nikitin said the shipyard will continue modernizing Delta IV Class submarines, and that the Yekaterinburg’s repairs will extend its service beyond 2020. The Yekaterinburg is among the navy’s oldest subs, but Zvezdochka will be modernizing its sister ship, the Tule, later this year. Delta IVs will eventually be replaced by the Borey Class, the Barents Observer news portal reported. Bellona’s Bøhmer questioned the expense producing new sub classes and bandaging older ones for extended service in light of financial problems Russia is having dismantling its aged nuclear battleship fleet.

On Wednesday, Zvezdochka director Nikitin complained he was again short on funds and resources to handle the Admiral Ushakov nuclear battle cruiser, which has been awaiting dismantlement at the shipyard for 17 years – a clear environmental hazard by Nikitin’s own admission.

‘The Russian navy is currently spending millions on new submarines which is diverting funding from cleaning up radiological challenges left over from the past,” said Bøhmer.  “To have this vessel lying around for 17 years with spent fuel is a dangerous and uncertain situation.”