An explosion caused by excessive air pressure ripped through the hull of a submarine undergoing repairs at the Northern Russian naval repair yard of Zvezdochka in Severodivnsk, the Russian Navy and plant officials said Friday. 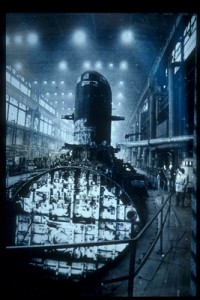 No damage occurred to the reactor and no radiation escaped into the atmosphere, early reports indicated. No one was hurt in the explosion, which took place yesterday, the day before City Day and Navy Day celebrations in Severodvinsk.

One source told Bellona Web that “there were no victims from the explosion, although around 25 square meters of the sub’s external hull were damaged.”

Igor Dygalo, assistant to the Commander-and-Chief of the Russian Navy, told the Russian agency Interfax that excess air pressure on the submarine caused its external hull to be partially destroyed.

“On July 26th a main ballast tank on one of the atomic submarines at the Zveozdochka enterprise’s dry dock was damaged by excess air-pressure during repairs on the subs high air-pressure system,” said Dygalo.

A representative Russia’sNorthern Interregional Territorial Hydrometeorology and Environmental Monitoring told Interfax that the level of background radiation background in Severodvinsk has not exceeding regulations in the aftermath of the blast.

“The atomic radiation in Severodvinsk at 10am Moscow time on July 28th was at 12 microroentgen per hour, which conforms to the natural background,” said a meteorologist with the service, according to Interfax.

A bang or a pop?
The Zvezdochka ship-repair plant’s general director Nikolai Kalistratov confirmed to Bellona Web that the incident took place, but called it a bang rather than an explosion.

“This is a working situation that did not include an explosion or any casualties. A free-flow of high air pressure hit the naval submarine that was not justified, leading to the bang,” Kalistratov said.

A representative for the Russian Emergency Situations Ministry in the Arkhangelsk District told RIA Novosti that there had been no explosion on the submarine saying rather that “some air popped while work was being done on the submarine during a technical process that could have been taken for an explosion.”

Oleg Florov, Zvezdochka’s head engineer, said that “the main ballast tank was torn because it had been overfilled with air, but an explosion did not take place.”

Zvezdochka’s press-secretary Nadezhda Scherbinina told Bellona Web that the submarine had not officially been handed over to the plant and that all the questions should be directed to the navy officials and that the Zvezdochka plant was not responsible. She would not detail any of the damages suffered by the sub.

Normally a submarine is handed over to the Zvezdochka plant only when the submarine is expected to be dismantled. But in this case officials indicated nothing about the current repairs other than the vessel had been placed in dry dock. The crew usually stays onboard during repairs.

In an interview with Echo Moscow radio station, the press-secretary of Severodvinsk city administration, Andrey Maslennikov, said the incident happened when air pressure was being reduced in the submarine’s high pressure tanks. Usually the air valves or the flood valve are in the ballast tank during such an operation. But on Thursday, the high-pressure air was released right into the sealed tank.

Bellona’s Alexander Nikitin, a former submarine captain and chairman of Bellona- St. Petersburg, says that such a blast cannot damage the submarine’s reactor as the high air pressure is not capable of destroying the main hull of the submarine.

On August 1st, 2005 an explosion and fire killed two at Zvezdochka during the dismantling of a nuclear submarine. The two casualties were 18-year-old metal construction assembler Sergey Lopatin and 22-year-old worker Alexander Boytsov.