The Northern Fleet’s nuclear war exercises that are currently underway in the Barents Sea ended in a great embarrassment for the Russian Navy when a ballistic nuclear missile failed to fire from a Delta IV class submarine called the Novomoskovsk. 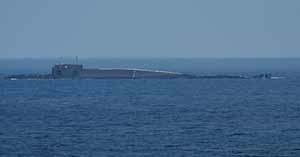 The extensive exercises launched this week involved 10 surface battle ships and support ships, including the aircraft carrying cruiser Admiral Kuznetsov, the nuclear powered cruiser Peter the Great, as well six nuclear ballistic missile and general purpose submarines, strategic bomber aircraft and helicopters. In short—everything that can still operate in the Northern Fleet was put to sea.

The exercises were titled “Security-2004.” The official purpose of the exercises was naval training for combating terrorism. The expected result of this event, apparently, was proof that strategic bombers and ballistic missile submarines were on the ready and an effective tool against the evil-doers of the world.

Vladimir Putin, the Russian President, was onboard the Typhoon class ballistic missile submarine Archangelsk (TK-17) Monday evening to observe the exercises unfold. The Archangelsk was commissioned in 1987 and is one of the three Typhoon class submarines that allegedly still remain in service in the Northern Fleet. Another three submarines of this class will be dismantled by American Cooperative Threat Reduction funds in Severodvinsk, in the Archangelsk region.

On Tuesday, the ballistic missile Delta IV class submarine Novomoskovsk (K-407) was to launch two SS-N-23 Skiff missiles, which would land in Kamchatka, in the Russian Far East, some 8,000 kilometres to the east. The dual launches were scheduled for 10:15 and 10:22 Moscow time.

Putin was in the command post onboard Archangelsk waiting for the report about the successful launch to come. Instead the hotly anticipated show was a disappointing flop.

Reports on what happened to the missiles and where it is are still unclear. Some assume that the first missile left the missile silo aboard the Novomoskovsk and fell nearby. The emergency services of the Northern Fleet are now on a desperate fishing trip for it in the murky waters of the Barents Sea.

The official statement from the Northern Fleet says that the launch of both of the missiles was for some reason blocked by a satellite, which is operated by the Russian space defence forces.

The Russian Navy’s Commander-in-Chief Vladimir Kuroyedov explained the incident by saying there was to be a “conditional” (virtual) launch during the exercise, though he did not elaborate, according to Russian press reports.

The crew of the Novomoskovsk never attempted to fire the second missile.

The Archangelsk, with Putin onboard, arrived safely at the port of Severomorsk.

Whatever the cause of the misfire, it proved that any “terrorists,” or evil-doers—to the great embarrassment of Northern Fleet commanders—would not have gotten what they deserved were the exercise an actual war, and President Putin departed convinced that the Russian nuclear shield has some large patches of rust on it.

The Russian President will now fly the Plesetsk Kosmodrom in Arkhangesk region, where he will watch the launch of a land-based ballistic missile from a Topol class launcher—this time, it can be presumed, with slightly lower expectations.

Russian nuclear shield falling
There are very few ballistic missile submarines on active duty in the Northern Fleet. According to NATOs annual review, the number of Delta IVs on patrol does not exceed two or three subs. These submarines were being built in the 80s and are currently the backbone of the Russian strategic submarine force.

Typhoons, on the other hand, have been a very rare sight in recent years. Of the six that were built, three are now being decommissioned. The Archangelsk Typhoon class submarine—and its air of the fading glory of the Soviet past—was specially prepared to be an underwater hotel for the Russian President during the exercises. The Archangelsk, according to observers, did not seem to take any active part in the drills.

The dilapidation of the infrastructure and weapon systems of the Russian nuclear arsenal are foundation for concern. Each time the Northern Fleet goes to sea for an exercise, fingers around Russia and surrounding nations remain crossed in the hope that no accident will befall the fleet.

If should something go wrong, the rescue services of the Northern Fleet are still in the same sluggish and incompetent shambles they were in when the Kursk sank in August 2000, and they would likely be of little help in any future mishaps. It is clear that Russia is reaching a point where it should seek refuge from its own nuclear shield, which, as today’s events illustrate, may fall at any time, landing not only on Russia, but on neighbouring states as well.