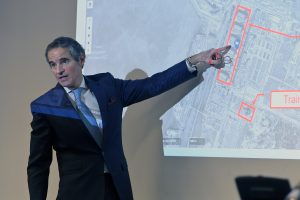 In harsh tones, Energoatom accused IAEA director Rafael Rossi of “lying,” and argued that an agency visit to the plant — which is Europe’s largest nuclear station  — would legitimize Russia’s occupation of the facility, currently being operated by Ukrainian staff who are under the control of Russian troops.

“The Ukrainian side did not invite Grossi to visit ZNPP [Zaporizhzhia Nuclear Power Plant] and had previously denied him such a visit, emphasizing that a visit to the power plant will be possible only when our country regains control over it,” Energoatom said in a post on its Telegram channel.

Ever since Russian troops overran the plant in a dramatic March 4 attack, Grossi has sought to send technical staff to review the plant’s safety status and to account for its stores of enriched uranium and plutonium. After the takeover, Russia’s state nuclear corporation Rosatom, sent several of its staff to the plant.

According to Energoatom, it is that staff who are now giving orders, a turn of events that Grossi has called “unsustainable.”

Who is in charge of the plant has since become ambiguous. While Rosatom Director Alexey Likhachev has denied that Rosatom intends to take operational control of the plant, other highly placed Russian officials have said the opposite — even going so far as to suggest that Ukraine should now pay Moscow for the electricity the Zaporizhzhya plant produces.

The IAEA has said the presence of Russian nuclear experts at Zaporizhzhya “is not entirely clear,” adding that the apparent dual oversight of the plant “goes against every safety principle we have” and creates “potential for disagreement, for friction, for contradictory instructions.”

Grossi has meanwhile sought permission from both sides to send in safety inspectors to tally any damages and perform inventory counts on 30,000 kilograms of enriched uranium and 40,000 kilograms of plutonium, all of which are byproducts of burning nuclear fuel and cannot readily be fashioned into nuclear weapons.

But both the Ukrainian and Russian sides have insisted such a visit take place under their own national flags.

Energoatom shot back at Grossi’s comments in the post to its Telegram channel, which it entitled: “IAEA Director General Rafael Mariano Grossi is lying again.” Enegoatom  asserts that any communications interruptions to the plant were “caused by Russian occupiers” who manufactured the crisis to prompt Grossi’s visit.

In their account, Russian forces cut off cellular service via Vodafone in the Zaporizhzhya region, interrupting the upload of plant information to the IAEA, saying further that the data would be transferred as soon as cell service was restored.

Speaking at a hearing of the European Parliament in May, Grossi called the situation “a very real danger”

“The issue is that both [Russia and Ukraine] agreed that I come but that I come under their respective flags,” he added. “So it is a bit of a schizophrenic situation. The format, the political modalities of the visit are even more important than the technical mission that I need to perform.”

In April,  Grossi visited the decommissioned Chernobyl nuclear power plant north of Kyiv. It was under Russian control for several weeks, during which time there was worry that power interruptions to the site could create a danger of radioactive substances being released.

This week, the Russian-installed administration in the occupied portion of the Zaporizhzhya Oblast, where the plant is located, have said they will hold a referendum on joining Russia.

About 60 percent of the Oblast is under Russian control, part of a swathe of Ukraine that Moscow seized early in the war, including most of neighboring Kherson province where Russian-installed officials have also discussed plans for a referendum.