Published on March 4, 2022 by Charles Digges 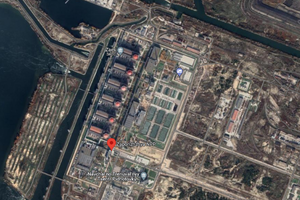 Energoatom, Ukraine’s state nuclear company, posted a message Friday on Telegram saying that the plant is now under Russian control. “Russian forces are controlling the administrative building and passage into the plant,” it says. “Our employees are still inside, ensuring the stable operation of nuclear facilities. Radiation levels are normal,” it said, adding that the fire had been extinguished.

Plant spokesman Andriy Tuz told CNN that shells had fallen directly on the Zaporozhe plant in the city of Enerhodar, but that the facility had not sustained any critical damage.

“A lot of technical equipment was hit,” at a training facility and a laboratory, he told CNN, adding that radiation levels were at normal levels. Energoatom reported more explosions near the plant later in the day on its telegram channel but their origins remained unknown.

Ukrainian president Volodymyr Zelensky lashed out at Russia for the attack on his telegram channel, accusing the Kremlin of wanting to stoke a second Chernobyl.

“There are 15 reactors operating on the territory of Ukraine,” he said, according to the Topor Live Russian-language news agency. “If they all blow up, that’s an evacuation for all of Europe – that’s the end for everybody.”

A protocol to the Geneva Convention restricts military attacks on nuclear facilities.

The facility at Zaporozhe has six reactors and provides Ukraine with a quarter of its power generation. According to the International Atomic Energy Agency, only one of the plant’s reactors is currently operating, and even then only at reduced power. One reactor had been shut down for maintenance, two have undergone controlled shutdowns, and one was being held in reserve in low power mode.

“Bellona is shocked by the attack at Zaporozhe,” said Bellona leader Frederic Hauge. “Beside the tragic human losses, such an attack on a nuclear power plant can be compared with playing Russian roulette with a nuclear bomb.”

There has been fierce fighting between local forces and Russian troops around the plant, Dmytro Orlov, Enerhodar’s mayor, said in an online post cited by the Kyiv Independent’s Telegram channel, adding that there had been casualties without giving details.

For the past several days, unarmed Ukrainian civilians had been gathering and building barricades on the roads leading into Enerhodar in an effort to thwart a Russian advance on the plant.

The early Friday morning attack on Zaporozhe renewed fears that the invasion could result in damage to Ukraine’s nuclear reactors and trigger another emergency like the 1986 Chernobyl accident, the world’s worst nuclear disaster, which happened about 110 kilometers north of the capital, Kyiv.

At an emergency meeting on Wednesday, the IAEA had warned about the possibility of just such an attack on any of Ukraine’s four operating nuclear power plants. Together these plants operate 15 nuclear reactors, all of them built while Ukraine was still a Soviet republic – and all of which have passed their original retirement dates.

In Bellona’s opinion, the fact that the Zaporozhe’s plant was struck by Russian forces could imply that severe environmental dangers are looming. Had the shelling resulted in a radioactive release, contamination could have been borne aloft and carried toward Crimea by the southeasterly winds currently blowing at the site.

Contamination could also have reached the Dnepr River, on the banks of which the plant sits, and been drawn by currents into the Black Sea, currently held by Russian destroyers, and likewise threaten the Crimean Peninsula, which Moscow annexed in 2014.

In this way, said Frederic Hauge, Bellona’s leader, the Kremlin’s war in Ukraine would have posed a significant radiation threat not only to the Ukrainians the Kremlin is fighting, but the Russian people, in whose name President Vladimir Putin claims to be fighting.

The Russian invasion of Ukraine, which began last Thursday, represents the first time a country with an extensive and established civilian nuclear industry has been invaded, which has alarmed nuclear experts and environmentalists for weeks.

While most reactor vessels – those built by the Soviets included – are rated to sustain impacts as devastating as a direct hit by a jumbo jet, the infrastructure that keeps them going is painfully vulnerable to stray missiles and other common military mishaps, experts say.

Most vulnerable are the spent nuclear fuel storage pools, which are used to store irradiated fuel onsite at most nuclear power plants throughout the world – Zaporozhe included. The Zaporozhe plant also has 380 cement containers meant to store spent fuel for 50 years after it is removed from pools.

Because the pools reside in structures that are less robust that the well-constructed vessels designed to protect reactor cores, a strike from errant ordinance could interrupt the circulation of cold water needed to keep the spent fuel cool. Should that happen, the Ukraine’s nuclear plants might soon be facing some of the dangers the Fukushima plant experienced in 2011.

“One particularly serious risk is that a direct attack might drain the pools in which spent fuel is stored, often in large amounts,” James Acton, a nuclear analyst at the Carnegie Endowment for International Peace, said in a recent report. “Without cooling, this fuel could melt, releasing very large quantities of radioactivity.“

Yet other dangers arise from the vulnerably of reactor cooling systems. The reactors at Zaporozhe, use electricity from the Ukrainian grid to power their coolant systems in the event they are forced to shut down. If those power lines are severed, diesel backup generators would kick in to keep the reactors cool. Each of Zaporozhe’s reactors has three such generators, each with about a week’s worth of fuel.

But after that, in circumstances or war, replenishing fuel supplies could become difficult, if not impossible. Again, the example of Fukushima – whose backup diesel generators were snuffed out by an influx of seawater – provides a troubling roadmap for what could come.

In that case, reactors began melting down withing a week of losing coolant. When they did, Japanese rescue workers were forced to pump seawater into the reactors in what turned out to be a hopeless attempt to keep them cool. Yet even those efforts failed to prevent a triple reactor meltdown.