Russian forces withdraw from Chernobyl amid allegations of radiation sickness

Russian forces have reportedly returned control of Chernobyl to the Ukrainians and withdrawn troops amid reports that Russian soldiers have suffered radiation sickness after their heavy armored vehicles churned up radioactive dust.

Published on April 1, 2022 by Charles Digges 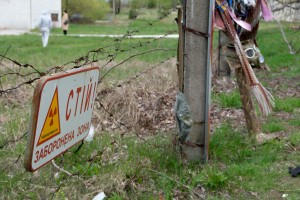 Russian forces have reportedly returned control of Chernobyl to the Ukrainians and withdrawn troops amid reports that Russian soldiers have suffered radiation sickness after their heavy armored vehicles churned up radioactive dust.

Russia took control of the decommission plant the day after President Vladimir Putin ordered the invasion of Ukraine on February 24. Troops forced Ukrainian personnel to continue managing the station, which was the site of a catastrophic nuclear meltdown in 1986 and remains a highly radioactive area today.

Although Chernobyl is no longer operational as a power plant, it contains several spent nuclear fuel storage facilities as well as the radioactive remnants of the exploded Unit Four reactor – all requiring constant management. It is also surrounded by a 2,600 square kilometer exclusion zone, which will remain contaminated for generations to come.

A release on Thursday from the International Atomic Energy Agency suggests that maintaining control of such a toxic environment might have been too overwhelming for Russian soldiers, who advanced on the site with no protective gear. The agency reported that Russian forces had, in writing, “transferred control of the [plant] to Ukrainian personnel and moved two convoys of troops to Belarus.”

Energoatom, Ukraine’s state nuclear corporation, alleged that the Russian pullout followed a number of Russian soldiers receiving “significant doses” of radiation when digging trenches in the forest in the exclusion zone. The IAEA said Thursday it could not independently verify Energoatom’s claims but was investigating.

IAEA head Rafael Grossi, who was in Ukraine this week for talks on ensuring safety and security for the country’s nuclear facilities, said Friday he will lead a support and assistance mission to Chernobyl “as soon as possible.”

Energoatom did not say how many soldiers had suffered from radiation exposure and gave no details of how they had been affected. The Ukrainian deputy prime minister Iryna Vereshchuk also said Russian troops were exposed to radiation after digging trenches in the forest.

Ukrainskaya Pravda’s online edition suggested as many as “seven busloads” of soldiers were taken to a special medical facility in nearby Belarus after driving tanks through the exclusion zone, kicking up radioactive dust. The Kremlin has not commented on the claims.

Edwin Lyman, a nuclear expert with the Washington-based Union of Concerned Scientists told the Associated Press that it “seems unlikely” a large number of troops would develop severe radiation illness, but it was impossible to know for sure without more details.

The departure of Russian troops could provide welcome relief to Chernobyl’s workers, who had been manning the plant more or less at gunpoint in shifts that stretched on for several days. Following the invasion, one shift of 211 workers was forced to remain at its posts for three weeks without respite. Those personnel were finally rotated out and replaced by a staff of volunteers on March 21.

The workers were also forced to cope with several power outages due to nearby combat. The blackouts jeopardized spent fuel cooling as well as radiation ventilation within the New Safe Confinement, an enormous steel dome that was installed above the remains of the Unit Four reactor in 2016. Power has since been restored, but the incidents highlighted the dangers of attacking a country with a developed nuclear infrastructure.