As Russian rockets hit the eastern Ukrainian city of Dnipro, staff at a former weapons uranium production facility nearby have warned that attacks on their site would lead to massive radiation releases that would contaminate an area populated by more than a million people. 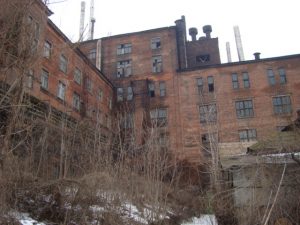 One of the dilapidated buildings at the Pridnieprovsky Chemical Plant in Central Ukraine. Credit: Bellona

As Russian rockets hit the eastern Ukrainian city of Dnipro, staff at a former weapons uranium production facility nearby have warned that attacks on their site would lead to massive radiation releases that would contaminate an area populated by more than a million people.

The Pridniprovskyi Chemical Plant – located in the town of Kamianske 35 kilometers east of Dnipro and 450 kilometers southeast of Kyiv – once produced more than half of the yellowcake that was enriched for use in the Soviet Union’s nuclear weapons arsenal.

But since 1991, the year of Ukraine’s independence, the site, which contains 15 times more radioactive waste than is found at Chernobyl, has stood largely neglected, its irradiated structures in a state of dilapidation held at bay by modest cash infusions from the Europe Union.

Dozens of the plant’s highly radioactive uranium workshops and a number of sprawling uranium waste fields now dot the industrial landscape of Kamianske – and these are now at risk as Russian assaults progress northward from the Zaporozhe area.

In a communique to the European Commission shown to Bellona, Yury Tkachenko, a Ukrainian expert who has worked to devise cleanup measures at the plant, warned that a military strike on plant territory would release radiation and drive background levels to ones far beyond those allowed by Ukrainian nuclear authorities.

Missile strikes on the plant’s uranium waste ­­– or tailings – sites threaten to release massive amounts of radioactive waste into the Dnepr River, one of central Europe’s most important water supplies, contaminating agricultural lands along its banks as it flows southward toward the Black Sea.

The plight of the Pridniprovskyi Chemical Plant, which Bellona visited in November, compounds the radiation threats facing Ukraine since Russia began its invasion on February 24.

Since that time, Russian troops have overrun Chernobyl, site of the world’s worst nuclear accident, as well as the Zaporizhzhya nuclear power plant, which was seized after a fierce fire fight damaged a laboratory on plant territory.

On Friday, military clashes severed powerlines to the Chernobyl site, cutting off numerous systems meant to keep the site and its 2,600 square kilometer exclusion zone safe.

The irradiated combination of melted nuclear fuel and reactor structures beneath the ruins of Chernobyl’s No 4 reactor, which exploded in 1986, requires constant ventilation to combat radiation spikes. The site also houses 20,000 spent nuclear fuel assemblies that were extracted from Chernobyl’s remaining reactors in the years following the disaster. These must be kept cool with electricity from the grid to avoid a radioactive release.

Ukrainian nuclear officials reported on Sunday that Chernobyl’s powerlines had been restored. But the incident underscored how fragile the systems maintaining Ukraine’s radiation safety are.

The six reactors at the Zaporizhzhya nuclear plant – Europe’s largest – are also under Russian command, raising concerns at the International Atomic Energy Agency.

The agency reported on Sunday that the plant’s staff is now under control of invading Russian forces, which IAEA General Director Raphael Grossi said suggested that plant staff could be operating under duress. The IAEA also reported that 11 officials from Rosatom, Russia’s state nuclear corporation, were at the Zaporozhe site, though they weren’t interfering with normal operations.

Their presence, however, suggests a direct challenge to Ukraine’s nuclear operator Energoatom, which told the IAEA it was no longer able to provide independent on-site regulatory safety oversight at the plant.  Rosatom, meanwhile, denies it has a presence in Ukraine.

The highly radioactive remains of the Pridniprovskyi plant constitute yet another potential radiation crisis as Russia’s war in Ukraine rages into its 19th day.

“The degree of radiological danger at the facilities […] in the event of their destruction by sabotage and other military actions is no less than those posed by the destruction of nuclear power plants in Ukraine,”Mikhail Belous, head engineer at Barrier, which is oversees radiation safety at the Pridniprovsky Chemical Plant, said in an email to Bellona.

“I really hope the facilities will remain in good order and not be touched,” he added.