In what could be the most serious nuclear incident in the two-week old Russian invasion of Ukraine, the decommissioned Chernobyl has lost power and is at risk of leaking radiation, Ukraine’s state-run nuclear company Energoatom said Wednesday.

Published on March 9, 2022 by Charles Digges 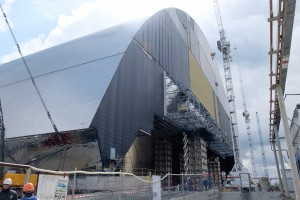 In what could be the most serious nuclear incident in the two-week old Russian invasion of Ukraine, the decommissioned Chernobyl has lost power and is at risk of leaking radiation, Ukraine’s state-run nuclear company Energoatom said Wednesday.

Kyiv has appealed to Russia for a ceasefire in the region to allow for repairs on high-voltage power line to the plant, which has been captured by Russian forces.

The lines are used to power cooling pools for some 20,000 spent nuclear fuel assemblies that are stored at the site, as well as critical infrastructure used in dismantling the radioactive remains of Chernobyl’s Number 4 reactor, which exploded in 1986, showering Europe and the Soviet Union in fallout.

“After that, cooling systems of the storage facility for spent nuclear fuel will stop, making radiation leaks imminent,” Kuleba said on Twitter.

The spent fuel in these storage pools was extracted from Chernobyl’s Number 1, 2 and 3 reactors, which continued functioning and producing electricity for several years after the accident. They were finally shut down and decommissioned 2000.

Some of Bellona’s sources in Ukraine say the interim facility doesn’t have backup generators at all.  Without a system to keep storage pool water cool, Ukrainian officials worry, heat from the spent fuel assemblies will eventually boil the water in the pools away, exposing them to the air and releasing radiation.

But Bellona experts – while saying power should immediately be restored ­– also assert that the loss of power may not pose as great a worry as some might think, owing to the age of the fuel that is stored within the pools

Typically, spent fuel is removed from reactors and placed in the pools, where it is allowed to cool for a period of about five years, according to safety guidelines recommended by the Union of Concerned Scientists, a Washington-based nuclear safety group.

After that, the fuel is cool enough to be moved to dry storage, where the main coolant is ventilation with fresh air – meaning the fuel no longer poses a danger of overheating on its own.

But at Chernobyl, a dry storage facility wasn’t constructed until 2021, meaning that the spent fuel has rested in the pools awaiting transfer for 20 years. That should mean, even during an interruption to cooling, that the fuel should be sufficiently cool by now to prevent boiling the storage pool water away.

The International Atomic Energy Agency, which has voiced concern over the state of Ukraine’s nuclear industry as Russian attacks continue, has supported that conclusion

“Heat load of spent fuel storage pool and volume of cooling water at Chernobyl Nuclear Power Plant is sufficient for effective heat removal without need for electrical supply,” the IAEA told Reuters in a statement.

But while spent fuel overheating due to power outages may be less of a worry at the Chernobyl site, it is still a major concern for the storage pools arrayed at the four active nuclear power plants that Ukraine operates.

Hosting 15 reactors in total, these plants each contain several spent fuel storage pools where fuel has been cooling for much shorter periods. Should cooling functions at any of those pools fail, hotter spent fuel elements could indeed become exposed to the environment, resulting in significant releases of radiation.

Structures around Chernobyl’s reactor Number 4 also require electricity to run their ventilation systems. Since 2016, an enormous steel dome called the New Safe Confinement, has enclosed the crumbling sarcophagus atop the reactor, inside of which technicians are dismantling the reactor’s remains. Without ventilation, radiation levels inside the confinement will rise.

The plant still employs some 2,000 workers to monitor these fuel and dismantlement systems.

Russian forces overran the still-irradiated Chernobyl site on February 26th, the second day of the invasion, raising global fears of a new nuclear catastrophe.  The Russians have also occupied the Zaporozhe nuclear power plant, Europe’s largest, which they took after causing a fire at one of the plant’s training laboratories.

A research reactor in Kharkiv was also destroyed by Russian shelling over the weekend.

The IAEA has redoubled requests to limit fighting around Ukraine’s nuclear facilities, with no success.

Bellona will continue to monitor this developing situation.