Italian-produced equipment was behind a mishap at the Belarus nuclear power plant late last year, which saw a newly operational Russian-built reactor taken offline after a number of so-called voltage transformers failed.

Published on March 18, 2021 by Andrei Ozharovsky, translated by Charles Digges 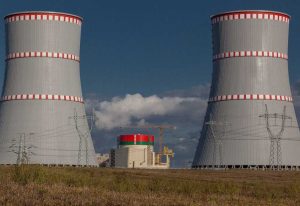 Italian-produced equipment was behind a mishap at the Belarus nuclear power plant late last year, which saw a newly operational Russian-built reactor taken offline after a number of so-called voltage transformers failed.

While use of imported transformers is common practice at nuclear power plants based inside Russia, they haven’t caused hiccups similar to those seen at the Belarusian plant – which has raised questions among observers about the reliability of the plant’s equipment.

The initial malfunctions were reported in early November when technicians at the Belarusian plant were commissioning the first reactor, a VVER-1200 unit built by Rosatom, Russia’s state nuclear corporation. The unit was taken offline three days later after a series of voltage transformers, which measure power in the plant’s electrical circuits, exploded.

The new reactor soon thereafter resumed electricity production but was again taken offline in January when a generator protection system was tripped during testing procedure.

While these incidents didn’t compromise the safety of the reactor, it was an embarrassment to Alexander Lukasheko, Belarus’s embattled dictator, who had opened the plant to ceremonial fanfare in the midst of massive street protests against his rule. A second VVER-1200 unit at the plant is expected to go online in 2022.

Numerous nuclear experts have been quick to point out that such reactor stoppages are common during the early stages of a new unit’s operation. But that’s done little to settle fears among Belarus’s Baltic neighbors, who have long said the plant is unsafe and have boycotted the energy the plant produces. In December, a scheduled safety meeting with European Union officials was cancelled when representatives of the plant failed to prepare for their visit.

Georgy Lepin, a Belarusian professor of technical sciences, said that the repeated shutdowns are evidence of serious problems.

“These units themselves are so unreliable that they constantly have to be adjusted, turned on and off,” he told Bellona. “This is a common system for nuclear power plants.”

Nina Dementsova, who heads the communications department of the engineering division of Rosatom, says that during the commissioning stage, frequent shutdowns of the power units are the norm.

“The regulations of the program for the commissioning of nuclear power units provide not only for the replacement of equipment, but also for repeated shutdowns of the unit, including disconnection from the network, for auditing and testing the equipment,” she said in correspondence with Bellona.

According to Vitaly Polyanin, vice president of Atomstroyexport, Rosatom’s equipment and service exporter, the Belarus plant’s first reactor experienced “an unplanned disconnection from the network by action of the electrical protection,” adding that this resulted from a failure of  Italian-manufactured “voltage transformers for the measuring circuit of the block transformer due to an internal short circuit.”

Speaking with Russia’s Kommersant newspaper, Polyanin said: “Such cases have happened in the history of the Russian nuclear power industry. Much depends on the quality of manufacture of these types of transformers, which are operated in rather harsh conditions … Certain measures were taken at Russian NPPs, some of the same measures were carried out here, at the first power unit of the Belarusian plant, thanks to which more serious consequences were avoided. ”

With the question of how often these voltage transformers fail at Russian nuclear plants, in particular at power plants running the VVER-1200 design, Bellona turned to Rosenergoatom, Russia’s nuclear power utility.

Andrei Timonov, Rosenergoatom’s director of communications emphasized in correspondence that he could not comment on the situation at the Belarusian NPP, but said that between 2019 and 2020, there had been no reactor stoppages in Russia due to failures of voltage measuring transformers.

“Indeed, Russian nuclear plant use foreign-made measuring transformers (in particular Siemens (Germany), Trench (Germany) and others),” Timonov wrote. “Let me remind you that the equipment supplies for the Russian nuclear plant under construction are carried out using competitive procedures. If, in the course of a competitive procedure, a potential supplier offers products that fully satisfy the customer, and at the same time at a competitive price, this particular supplier is chosen. Please note that all equipment supplied to all construction sites must be agreed to and approved by the customer. ”

Thus, foreign-made equipment continues to be used at Russian nuclear plants. Atomstroyexport, which is engaged in the construction of nuclear power plants abroad, is not going to abandon imported equipment either.

“The aforementioned measuring transformers have nothing to do with nuclear and radiation safety, and [their malfunctions] are associated only with the cessation of electricity generation. Moreover, the detection of equipment malfunction at the initial stage of testing only confirmed the highest professionalism of the specialists and the thoroughness of their work,” Rosatom’s Dementsova wrote to Bellona. “Replacement of instrument transformers will in no way affect the partnership relations between Atomstroyexport and the supplier enterprise, since before that, there were no complaints about the equipment from this manufacturer. I also note that all equipment supplied to all construction sites must be agreed to and approved by the customer. This is the operating principle that Atomstroyexport will adhere to in the future.”

Unlike Timonov, Dementsova chose not to indicate the brand and manufacturer of transformers that failed in Belarus, although the Bellona asked. She also didn’t answer questions about why imported equipment was chosen at the Belarus plant, and whether there are domestic analogues. She also refused to say whether the failure of the transformers at the Belarusian plant could be blamed on low quality.

It should be clarified that these transformers are small, standing no taller than a regular stool.

“This device is not unique to the nuclear power industry and is present in the electrical circuits of all power plants, regardless of the method of generating energy,” said Timonov. “Yes, it happens that [measuring] transformers fail, but it is worth noting that this has nothing to do with the main equipment and does not affect nuclear safety.”

A new ‘planned’ stoppage at the Belarus plant

Meanwhile, the BelTA official Belarusian newswire reported on February 20 that the reactor was scheduled to be shut down again “for testing and routine maintenance in accordance with the program of the experimental-industrial operation stage”. The news post appeared on February 22nd, two days after the supposedly planned shutdown. At the same time, the official website of the Belarusian nuclear plant made no note of this shutdown.

The reactor was reconnected to the grid on March 8 but was again disconnected on March 10. This time, however, Belarus’s Ministry of Energy provided advanced warning, saying on its website that the outage was “to conduct a study of xenon transient processes.”

Such inconsistent approaches gives rises to speculation and assumptions that other  shutdown were caused by a malfunction. Perhaps in order to eliminate the questions, Belarusian nuclear scientists should publish plans about scheduled shutdowns at power units that are still in the commissioning stage.

“The Russian regulatory authorities, the IAEA and the public are informed about unscheduled shutdowns in accordance with the established procedure,” wrote Timonov.  “Specifically, such information is published on a plant’s website. This experience should be adopted by Belarus as well. Informational openness avoids misunderstandings of the situation, and conjectures and misinterpretations – and at the same time sheds light on real-life problems.”