Published on November 10, 2020 by Charles Digges 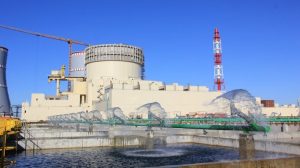 The plant, which is opposed by Belarus’ Baltic neighbors, was opened to ceremonial fanfare on Saturday by the country’s embattled authoritarian leader, Alexander Lukashenko, who declared that the former Soviet republic “will become a nuclear power.”

According to Radio Free Europe, a plant official confirmed the stoppage on Tuesday. That statement followed remarks by Belarus’ energy ministry a day earlier, which indicated that unspecified pieces of equipment must be replaced before electricity production can resume at the reactor.

The source added that “formally, nothing out of the ordinary happened,” and pointed to similar incidents at other Russian-built nuclear power plants. But he also said that it was unclear as to when the reactor would begin generating electricity again as an investigation of the mishap is launched and the transformers replaced.

The incident hasn’t impacted the safety of the reactor and no elevated radiation levels have been measured, the portal reported.

Still, the mishap at Belarus’ first VVER-1200 reactor is bound to embarrass Lukashenko, who has been the focus of massive street protests since declaring victory in a disputed presidential election in August. The plant was built by Rosatom, Russia’s state nuclear corporation, which furnished Minsk with a $10 billion loan to complete the project. The plant’s second reactor is due to come online in 2022.

The plant itself, located only 50 kilometers from the Lithuania capital of Vilnius, has raised the ire of Belarus’ Baltic neighbors. Estonia and Latvia have joined Vilnius in blockading electricity imports from the plant and have accused Minsk of skirting safety measures during the plant’s construction.

Rosatom has rejected those claims, saying the plant’s design conforms to the highest international standards as confirmed by the International Atomic Energy Agency, a U.N. watchdog.

Construction at the plant was delayed in 2015 when a crane operator dropped a 330-ton reactor pressure vessel, a sensitive structure that houses the reactor core, from a height of four meters.

Officials sought to cover the incident up, but it was eventually brought to light by a whistleblower. At the time, Rosatom insisted that the reactor wasn’t damaged, but it agreed to replace the unit at the demand of Belarusian authorities. Another reactor pressure vessel bound for the plant was accidentally run into a cement column when it was being unloaded from a rail car.

In recent weeks, Lithuanian authorities have handed out free iodine pills to residents living near the Belarus border. Iodine can help reduce radiation build-up in the thyroid in case of a leak of radioactivity.

The nuclear plant has also proved divisive within the Belarus, which suffered severe damage from the 1986 Chernobyl nuclear disaster. The disaster spewed radiation across much of Europe, but Belarus was hit particularly hard by the fallout.