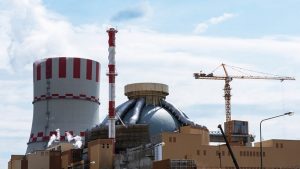 The reactor is a VVER-1200, the Russian nuclear industry’s flagship product as it seeks to expand its sales abroad. The new Novovoronezh reactor represents only the third of these reactors that has yet gone into service in the world, though Rosatom, Russia’s nuclear corporation, has VVER-1200s under construction in Hungary, Belarus and Turkey.

Eventually, the Novovoronezh II nuclear plant will consist of four VVER-1200 reactors, which are being built to replace the power production from the five older VVER type reactors at the first Novovoronezh plant.

A similar process is underway at the Leningrad Nuclear Power Plant near St Petersburg. There, four new VVER-1200s are expected to replace the power supplied by older RBMK graphite moderated reactors of the type operated by the Soviets at Chernobyl. Like the Novovoronezh II plant, the Leningrad II plant will also take the name of the plant it is replacing – becoming the Leningrad II plant.

Somewhat confusingly, the first two VVER-1200 reactors at the Novovoronezh II plant are also referred to as reactor Nos 6 and 7, connoting that the construction at this site is meant to be viewed, at least for the time being, as an extension of the current plant rather than as its replacement.

But aside from the pressing environmental issues that have to be considered when safely storing the tons of spent nuclear fuel and radioactive waste that will come of dismantling these reactors, there are major questions over how such operations will be financed.

Like other countries operating nuclear reactors, Russia funds decommissioning and dismantlement on the back of electricity tariffs charged by its nuclear power plants.

But where other countries using nuclear power have been collecting these tariffs for more than half a century, it was only in 1995, after the fall of the Soviet Union, that the Russian nuclear industry began earmarking a portion of its revenues toward the work of eventual decommissioning.

Some have therefore worried that the decommissioning projects Russia is beginning won’t be finished for some time. This may be particularly true for the Leningrad plant’s four RBMK-style reactors, whose irradiated graphite stacks defy conventional nuclear reactor dismantlement practices.

Meanwhile, Rosenergoatom has reported that the second reactor at Novovoronezh II has gone into commercial operation without incident.

The same cannot be said of the first VVER-1200 put into operation at the plant. When that reactor went into service in January 2017, a generator failure caused it to shut down. While such incidents commonly occur when bringing new reactors online, Rosatom’s tardiness in explaining the glitch caused a minor panic in the local press. The generator issue was eventually fixed and the reactor brought back into service.